Examining the must-watch story lines for Netflix in the year ahead.

Shares of online streaming pioneer Netflix (NFLX -3.51%) put pretty much every other publicly traded company to shame in 2013.

For starters, Netflix has been the best-performing stock in the S&P 500 year to date by a country mile, rising nearly 300% as we head into the year's end. In fact, Netflix has been so head-and-shoulders better than the rest of the market that it's actually beaten Best Buy, the second best stock in the S&P, by an impressive 60 percentage points. (Note: The video below incorrectly states 100 percentage points.) 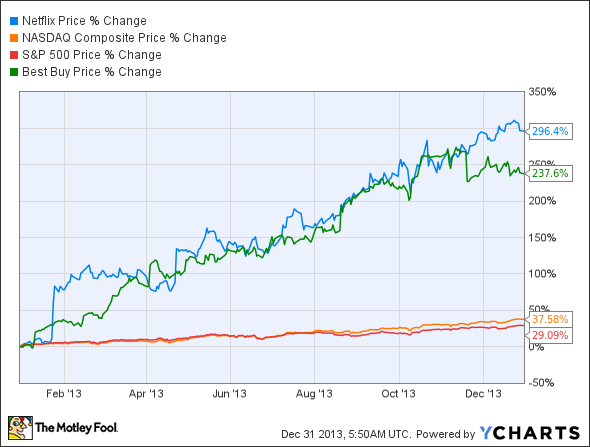 The year ahead for Netflix
Thankfully for long-term investors, Netflix appears poised to continue to execute on its enviable business model in the year to come. This of course means much more original content from Netflix, both in terms of at least one new series as well as follow-up seasosn to several of Netflix's most successful series from 2013 like House of Cards and Orange Is The New Black.

In the video below, tech and telecom analyst Andrew Tonner looks at some of the key storylines investors need to follow concerning Netflix as investors ring in the new year.