With the Nasdaq Biotechnology Index up 65% since the start of the year, it's clear that the biotech sector performed extraordinarily well in 2013 -- but which stocks were the biggest winners? Several small-cap and mid-cap biotech companies posted returns of 200% or more through the middle of December this year, and, in this series, I review the 15 biggest movers.

Let's finish this 2013 review with No. 1 on the list, Gentium (NASDAQ: GENT), which finally won European approval for its long-awaited drug Defitelio in October, helping clear the way for Jazz Pharmaceuticals (NASDAQ:JAZZ) to acquire it for nearly $1 billion in the middle of December.

All in all, the change in Gentium's fortune resulted in more than a 400% return this year, making it the top gainer in my list of the 15 best performing biotechs of 2013. 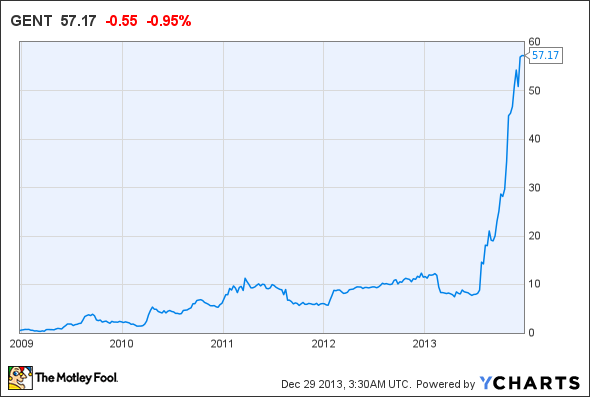 Sales of those two drugs are posting solid growth with Xyram and Erwinaze revenue improving 50% to $153.7 million and 39% to $44.1 million in the third quarter of 2013, respectively.

Jazz's success in building sales for those two drugs likely attracted the company to Gentium's orphan drug Defitelio, which protects vascular cells in cases of severe hepatic veno-occlusive disease, or VOD, a condition that can occur in stem-cell transplant patients.

The condition, which occurs in just one to five of every 10,000 people, is characterized by blocked veins in the liver, has a nearly 90% mortality rate due to liver failure, and typically occurs early on following transplant.

That prognosis and a lack of current treatments means Defitelio offers new hope for a range of patients who will receive the treatment over the course of at least 21 days and for as long as symptoms and signs of VOD exist. That significant unmet need, revenue-friendly dosing schedule, opportunity for global rollout, and chance to leverage Jazz's existing sales force all made Jazz's acquisition attractive to both companies.

Fool-worthy final thoughts
The acquisition is expected to close in the first quarter, which means investors will need to make sure they keep a close eye on Jazz from now on. Jazz likely believes it can win approval for Defitelio in the U.S., where it has fast-track designation. Previously, Gentium had filed for U.S. approval in 2011, but pulled its filing shortly thereafter because the FDA noted deficiencies.

However, with the EU's approval in hand and a more-complete resubmission likely in the first half of next year, FDA regulators could be won over by the end of 2014.  If so, the potential opportunity for sales growth tied to approval and label expansion may wind up making Gentium's billion-dollar price tag a bargain for Jazz.