What's the scariest disease imaginable? The one you don't know you already have! Here are five diseases that often go undetected by patients until it's too late.

It's truly amazing how well humans have evolved given how short of a timespan they've been on this planet.

According to the World Health Organization, there are 12,420 disorders, diseases, and health-related ailments that could potentially strike us each and every day. Yet somehow we not only survive, we're managing to thrive, as life expectancy rates around the world continue to rise. The Global Burden of Disease Study conducted in 2010 showed that the number of deaths over age 70 had risen to 43% worldwide, from 33% just 20 years prior.

This increase in life expectancy can be attributed to increasing awareness of serious diseases, improved pharmacological vaccination rates, and lower worldwide poverty rates that have resulted in better eating habits.

What's still scary, though, is that there are a number of disorders and diseases -- some very serious, and some not as immediately serious -- that are carried, unknowingly, by people for weeks, months, and in some cases years. Getting these diseases under control and improving awareness of the unknowing carriers of these disease could help improve a quality of life, and has the potential, over time, to make a meaningful impact on worldwide life expectancy.

Let's have a look at five common diseases that I've taken note of in my years of writing about the health-care sector that often go undetected by people, as well as glance at a few therapies and devices that could benefit if awareness of these diseases improved.

Diabetes
Although diabetes is a global problem, it's particularly prevalent in the United States, due to the fact that nearly 34% of the U.S. population is considered obese, and diabetes often goes hand in hand with obesity.

According to statistics from the Centers for Disease Control and Prevention, there are currently 25.6 million people in the U.S. with diabetes, 7 million of whom are currently undiagnosed. To add insult to injury, the CDC also notes that there are an additional 79 million adults in this country showing signs of pre-diabetes, a condition that could lead to full-blown diabetes later on in life.

Diabetes is certainly a manageable disease if caught early and treated regularly, which is why the Obamacare health reforms may wind up being crucial to getting people in to see their physician for preventative visits. Were this to happen, I could see a bright future in the cards for Johnson & Johnson's (JNJ 0.02%) Invokana. Invokana is the first SGLT2 inhibitor approved in the U.S. It works by blocking glucose absorption in the kidneys for type 2 diabetes patients (type 2 accounts for 90% of all diabetes cases). As an added bonus, one of Invokana's side effects is modest weight-loss, which is perfect since most diabetes cases lead to a patient being overweight or obese.

Tuberculosis
Tuberculosis, one of the most common infectious diseases -- and one that is both curable and preventable -- is found in its latent form in about 2 billion people worldwide based on statistics from the World Health Organization. Before you start freaking out, understand that only 5% to 10% of those latent virus carriers will have the potential to develop the active form of the disease at some point in their lives. However, understand that next to AIDS, tuberculosis is the next-greatest single-agent killer in the world. It's an especially virulent disease in lower-to-middle-income countries where 95% of all TB deaths occur.

Not to beat the drum on Johnson & Johnson, but it also had Sirturo, a multidrug-resistant TB medication, approved by the FDA in late 2012. This was the first TB medication approved in 40 years, and it targets the most difficult to treat form of the disease. Peak sales of Sirturo are estimated as high as $400 million.

Hepatitis C
Based on data from the CDC, there about 3.2 million people infected with hepatitis C, a liver disease, in the United States -- and as many as 75% of those people have no clue they carry the disease. Over time, hepatitis C can lead to liver cirrhosis and even liver cancer. WHO statistics peg the number of worldwide cases at approximately 180 million, meaning, if the CDC's estimates are extrapolated, some 135 million people around the world are clueless that they have this disease. 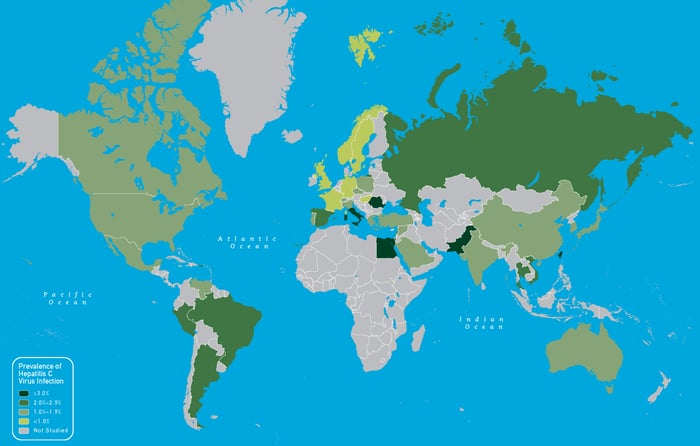 I believe this could be a shining moment for a medical device maker like OraSure Technologies (OSUR 1.62%), which makes a point-of-care test for hepatitis-C, the OraQuick HCV Rapid Antibody Test. In New York, for example, a law was recently passed requiring health-care service providers to supply one free test for hepatitis-C to baby boomers born between 1945 and 1965. With improved testing and awareness, improved treatment results should follow.

COPD
COPD, or chronic obstructive pulmonary disease, is responsible for about 120,000 deaths in the U.S. every year, and is characterized by blockage and inflammation of the tubes of the lungs, making it difficult for a patient to breathe. Smoking is, without question, the predominant factor that often leads to COPD.

According to the National Heart, Lung, and Blood Institute, a subsidiary of the National Institutes of Health, there are more than 12 million people in this country diagnosed with COPD and an additional 12 million who are undiagnosed and likely to have this disease.

Obviously, preventative care and increased awareness are the first steps to catching COPD early, but unfortunately there is no cure. However, over the past year we have witnessed the FDA approval of two new long-term COPD treatments from the likes of GlaxoSmithKline (GSK 2.35%) and Theravance (NASDAQ: THRX). Breo Ellipta was approved in May to reduce COPD exacerbations and reduce airflow obstruction, while Anoro Ellipta was approved just last month as a once-daily treatment for airflow obstruction. Together, each therapy is expected to generate in excess of $1 billion in peak sales.

Heart failure
Not to be confused with a sudden heart attack, heart failure is a progressive condition that comes about as a result of a heart attack, chronic high blood pressure, or even diabetes, which affects the ability of the heart to pump blood throughout the body.

Based on statistics from the Heart Failure Society of America, heart failure affects nearly 5 million people in the United States, is the only cardiovascular disease that's still on the rise, and is widely unnoticed by a number of patients. Part of this has to do with minimal research funding and an incomplete understanding of what occurs in heart muscles that causes them to weaken over time. In fact, the HFSA notes that the number of annual diagnoses has more than doubled since 1979.

While improved preventative care, especially for patients with a history of cardiovascular problems in their family, could stem this rise, pharmacological solutions like Novartis' (NVS 1.02%) breakthrough therapy-designated experimental drug RLX030, known as serelaxin, could be the ultimate solution. In clinical trials, serelaxin reduced death rates by 37% in patients with acute heart failure six months after treatment. Because of its breakthrough designation, it could reach pharmacy shelves more quickly than your typical drug and make a huge impact on improving patient quality of life and life expectancy.