If you owned stocks in 2013, chances are you've got a reason to smile. But not all companies did well. Here are the three worst-performing stocks I own.

Third worst: Female Health
Female Health
(NASDAQ:VERU) isn't for the faint of heart -- or the heartless. This female-condom manufacturer boasts the only FDA- and World Health Organization-approved device controlled by a woman that prevents both unplanned pregnancies and sexually transmitted diseases. That's an admirable invention for anywhere in the world, but for women in developing countries, it's an empowerment tool that enables them to protect their health and their pride.

For investors wanting to make good money doing good things, this creates an interesting opportunity. At $240 million, Female Health is decidedly small cap. But with a relatively stable customer base (the United Nations and USAID account for 65% of sales) and a 3.3% dividend yield, Female Health isn't exactly a wild-card growth stock.

While Female Health shares gained just 16%, lagging the S&P 500 (SNPINDEX:^GSPC) by 10 percentage points, nothing about this company's fundamental value has changed since I purchased shares in September.

Formerly French Telecom, Orange (NYSE:ORAN) underwent a name change and a 2:1 stock split this year -- but neither move did anything to change the fact that Orange shares added on a lackluster 10.3% in 2013.

There are two main reasons Orange underperformed. First, its stalwart status proved too slow for many bullish investors, who sold off shares of dividend stocks in favor of hot stocks with major growth potential. Its 4.5% dividend yield is usually a major draw, but for some adventure-seekers, it meant nothing more than stationary sales.

Second, Orange is facing unprecedented competition in its biggest market. France accounts for almost 50% of the company's revenue, and the combination of cash-strapped consumers and a new competitor with the scary name "Free" are sucking into sales.

Looking at Orange's existing markets alone, the stock is cheap. And when I factor in roaming agreements that its current infrastructure allows it in France, plus significant upside from Africa and Middle East subsidiaries, Orange will keep its piece of my portfolio pie next year .

Worst of the worst: Apple

Owning Apple stock has been a roller-coaster ride, but I'm not ready to get off yet. The company's sell-off has kept any inklings of overvaluation out of my mind, and Apple's creative culture continues to churn out better products.

Unlike some bullish investors looking for Apple's next big break, I'm content to sit back and watch iPad sales soar, iPhones enter China on a grand scale, and have this company continue to create quality products with admirable transparency and ever-increasing labor and environmental standards.

Sticking with the worst 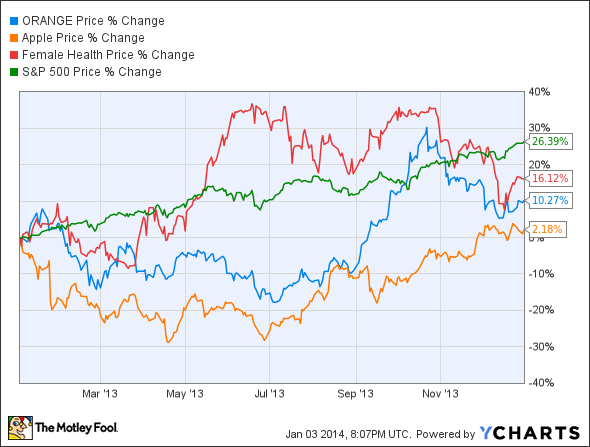 While my three worst investments all ended up in the black for 2013, it wouldn't have mattered if they were down 50% or more. I buy to hold and, more specifically, adhere to an unbreakable rule of not selling any shares I purchased in the past two years. For Female Health, Orange, and Apple, I added on shares of all three companies in the past three years.

I invest in companies, not stocks, and the fundamental value of each of these corporations leaves me confident that Mr. Market will come around in the long-term.