Lumber is a wonderful business, but it's highly correlated with the housing market. That was clearly evident during the housing correction. Rayonier (NYSE:RYN), however, sidestepped most of that carnage because of its focus on using trees to make fibers. Now, however, that business could face its own threat: Electronic cigarettes.

Disruptive technology
Although cigarette companies spent years denying a causal link between their products and certain illnesses, that's the industry's history. Now, everyone acknowledges the risks of smoking, and more and more smokers are being pushed in subtle and not so subtle ways to kick the habit.

That's a big deal for a company like Altria (NYSE:MO), which makes its bread and butter selling cigs. The introduction of electronic cigarettes has only made things more difficult. For customers, however, electronic cigarettes actually solve a problem. Since the electronic version of a cigarette doesn't burn anything, all the rules and regulations that make smoking hard go out the window. For now, anyway, since the government is looking into the product.

Still, this disruptive technology could eventually eat the lunch of companies like Altria that are focused on developed markets where the anti-smoking push is most pronounced. It's why the company was happy to announce that it was joining the electronic cigarette craze along with its first-quarter earnings. What is now just a niche could be a way for Altria to offset the long-term decline in its core product. However, not every cigarette-related company can make that pivot.

Filters
In 2012, about 80% of Rayonier's top and bottom lines came from performance fibers. These fibers are used in everything from LCD screens to cigarette filters. With the pick up in the housing market, that number will be a little lower this year, but not by much. That compares to competitor Weyerhaeuser (NYSE:WY) which generated about 30% of its business from fibers in 2012. And a recent purchase is set to push that notably lower. 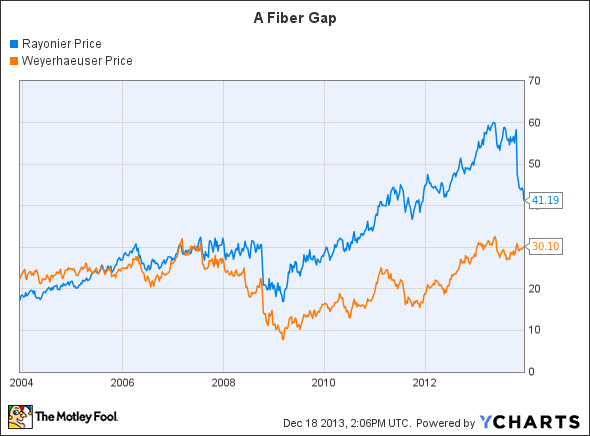 This difference helps explain why Weyerhaeuser, which has far more exposure to lumber sales, fell so much further than Rayonier during the housing bust. However, now that the housing market is recovering and electronic cigarettes are starting to gain traction, Rayonier's heavy focus on fibers could start to look like a liability.

That's because a large percentage of Rayonier's fiber business is tied to cigarette filters. That's been a growth market because of increasing use of filters in markets like China. However, if more and more smokers opt for electronic versions, sales in this segment could start to slow or even turn lower.

Rayonier's CFO Hans Vanden Noort reports that "so far, we haven't seen any indication" of an issue. And China is the company's largest filter market, so until electronic cigs hit that nation in a big way, it might not be a notable problem. However, he also noted that, "I think we have to wait and see the evidence." In other words, it's too early to tell what electronic cigarettes will do to this segment of the business.

In fact, Vanden Noort suggested that electronic cigarettes could turn out to be a gateway product. That might lead to more smoking and more filter sales. However, looking at the trends in developed markets suggests this won't be the long-term outcome. And unlike Altria, Rayonier can't join the bandwagon. If traditional cigarette sales decline, so does Rayonier's filter business.

Keep an eye on it
Clearly, it's too soon to tell if electronic cigarettes will be a big issue for Rayonier's fiber business. However, because this segment is so heavily invested in cigarette filters, you need to keep a close eye on this disruptive technology. If a company like Altria is embracing it, there's good reason to be concerned.