Goldman Sachs resumed coverage of Celgene (NASDAQ:CELG) in December 2012 with a rating of "neutral" and a price target of $77 when shares were $81. In the wake of a near doubling since, the investment bank has now dropped its rating to "sell" from "neutral," knocking shares in Celgene down 5% on Monday.

But Celgene doesn't appear overpriced versus its peers, suggesting that investors may want to stay focused on the company's long-term potential rather than the short-term whims and whispers of these Wall Street analysts.

Building a cancer-killing franchise
Celgene is building an oncology powerhouse behind its blockbuster drug Revlimid, a treatment that won approval for myelodysplastic syndromes in 2005, multiple myeloma in 2006, and mantle cell lymphoma last June. Demand across those indications has Celgene expecting Revlimid's sales will total between $4.2 billion and $4.3 billion this year.

But Revlimid isn't the only drug succeeding for Celgene. Abraxane -- approved for breast cancer in 2005, non-small cell lung cancer in 2012 and pancreatic cancer this past September -- enjoyed 60% year-over-year sales growth on its way to $170 million in third-quarter sales.

The company also won FDA approval for Pomalyst as a treatment for multiple myeloma in February, which helped Pomalyst sales climb 35% year-over-year to $90 million in Q3. Across these three drugs and Celgene's other therapies, Vidaza and Thalomid, Celgene estimates that full-year sales will come in near $6.2 billion this year.

Yet, investors aren't overpaying relative to other biotechs
Amgen paid nearly 17 times sales to acquire Onyx Pharmaceuticals to get a hold of Onyx's oncology drug Kyprolis, which competes against Celgene in multiple myeloma. Despite that vote of confidence for the industry, Celgene is trading in line with other big biotechs like Regeneron (NASDAQ:REGN), Gilead Sciences (NASDAQ:GILD), and Biogen (NASDAQ:BIIB) at 11 times sales.

Similar to Celgene, all three of those companies have blockbuster drugs on their hands and have pipelines likely to produce significant sales in the future.

Gilead had total sales of $7.7 billion in the first nine months of 2013, most of which has come from its antiviral drugs, including its $3.6 billion a year AIDS drug Atripla. The company won one of the most highly anticipated FDA approvals in recent memory in December, when the FDA gave the nod to its Sovaldi for hepatitis C. Gilead also has high hopes for idelalisib, a drug under evaluation for leukemia and lymphoma.

Meanwhile, Biogen augmented its $2.8 billion a year multiple sclerosis drug Avonex by launching Tecfidera this past summer. Sales for that drug have already reached $286 million in the third quarter. Treatments for hemophilia, leukemia, and lymphoma are in the late stage of development and could drive future sales growth for Biogen.

Comparing these big biotechs to Celgene shows all three are valued similarly to or arguably more expensively than Celgene.

Analysts have increased estimates for Celgene's earnings per share to $7.3 for next year, roughly 20% more than this year. That gives Celgene a forward P/E ratio of 22, lower than Biogen, Gilead, and Regeneron. Celgene's P/E to growth ratio of 1.24 is also less than both Regeneron and Biogen.

Future growth may mean Celgene is even cheaper
Celgene doesn't think Revlimid's opportunity is limited to its currently approved indications. While Revlimid failed in a late stage leukemia trial in July , Celgene reported positive data in newly diagnosed multiple myeloma patients last summer and is studying the drug as a treatment for non-Hodgkins lymphoma.

In addition to Revlimid, Celgene is evaluating 25 unique compounds for 30 diseases across hundreds of ongoing studies. One of the most promising of those drug candidates is apremilast, which is in trials for a range of autoimmune diseases including psoriasis and psoriatic arthritis -- indications with significant demand and blockbuster existing treatments like AbbVie's Humira. Celgene filed for FDA approval of apremilast in psoriatic arthritis and an FDA decision is expected early in 2014.

Celgene's other deals with young biotech companies include partnerships with Epizyme for its mixed lineage leukemia drug; blubird bio, which is working on reengineering T-cells into cancer killers; and Acetylon, which has an early stage myeloma prospect.

Fool-worthy final thoughts
Celgene's enthusiasm for expanding labels on its current drugs and reaping rewards from its collaborations with these emerging biotech companies, has the company projecting its sales will double to $12 billion by 2017. That heady forecast has the industry forecasting earnings per share could head north of $12 in 2016. If so, short-term sell-offs in Celgene's shares may provide long-term investors with an opportunity to build positions. 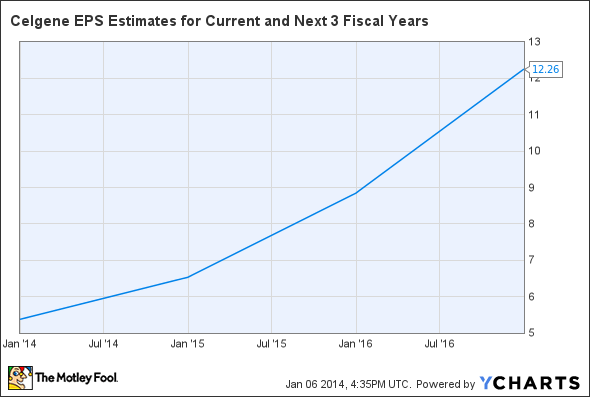 CELG EPS Estimates for Current and Next 3 Fiscal Years data by YCharts.