After falling 7 million barrels the previous week, this latest report marks the sixth-straight week that supplies have shrunk. Continued demand from refineries has kept inventories pushing down in the past month. Overall inventories have dropped 1% in the past 12 months. 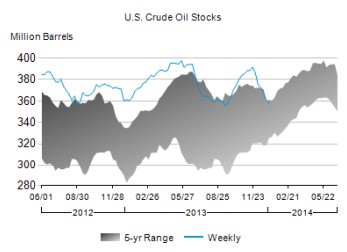 Gasoline inventories expanded 6.2 million barrels (2.9%) after increasing 0.8 million barrels the week before. Demand for motor gasoline during the last four-week period is up a seasonally adjusted 4.8%. In the last year, supplies have fallen 2.6%. 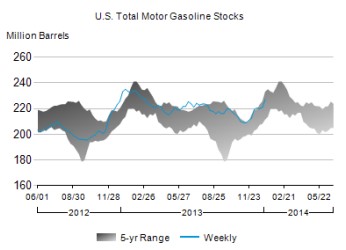 Distillates supplies, which include diesel and heating oil, increased 5.8 million barrels (5%), adding on to the previous week's 5 million barrel addition. Distillates demand for the last four weeks is up a seasonally adjusted 2.3%. In the past year, distillates inventories have decreased 4.4%.

You can follow Justin Loiseau on Twitter, @TMFJLo, and on Motley Fool CAPS, @TMFJLo.  We Fools don't all hold the same opinions, but we all believe that considering a diverse range of insights makes us better investors. The Motley Fool has a disclosure policy.