Stocks don't get much hotter than shares of online-radio upstart Pandora (NYSE:P).

Over the last year, Pandora stock has more than tripled, putting the vast majority of tech stocks to shame at a time when it's been very good to be a tech investor in general. 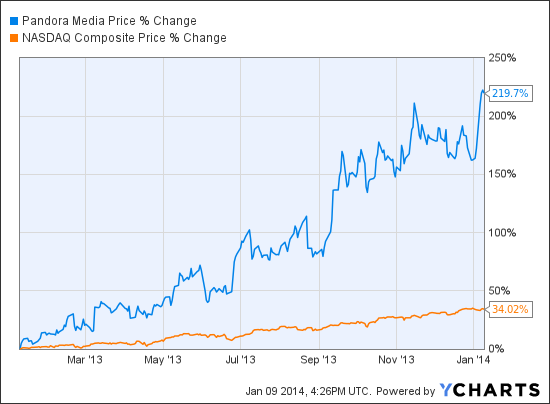 True to its disruptive early stage business model, Pandora has mostly achieved these fantastic returns on promise rather than profits. But as a company with such lofty goals as upending the entire U.S. radio industry, there's a case to be made that Pandora's potential is indeed worth its premium pricing today.

Pandora surged earlier this week, setting another all-time high, at least in part due to its announcement that it plans to extend its budding advertising business into its in-car radio. This could be big, folks.

In-car kingpin
For the record, I've long been skeptical of Pandora's valuation and have becoming increasingly concerned about it as the stock has soared continually higher. But at the same time, I've changed my mind to an extent on the long-term potential of Pandora's business model.

Regardless, it's hard to overlook the impressive size of the monetization opportunity that Pandora will now have access to with in-car ads. According to Pandora, half of all radio listening in the United States takes place in the car. This also fits nicely in the broader theme of Pandora doubling down on local advertising markets.

Over the last several years, Pandora has invested heavily in sales forces in many key metropolitan areas to help the company tap into local advertising markets. Pandora has also struck deals with automakers to have its online-radio service built into 130 different vehicle models. Now, it finally appears Pandora has adequate infrastructure in place, both in terms of product delivery and back-end monetization, to finally flip the switch on in-car ads.

All told, Pandora figures $15 billion is spent annually on local radio advertising in the U.S. This move means Pandora now will be able to vie for a bigger piece of this multibillion dollar pie.

So, is Pandora a buy today?
I'm torn on this one.

As the leading name in online radio -- sorry, Apple's iTunes Radio -- Pandora's business model is truly disruptive and likely an improvement over the traditional local-radio model in many ways.

In terms of economic advantages, although it does require investment in ad-sales teams, Pandora's model avoids the other high fixed costs required to run a local radio station. Broadcasting equipment jumps to mind.

Pandora's service also enables users to create their own stations to their preferences, versus being beholden to a handful of local stations that might not offer the kind of music users want to hear. What's more, Pandora's algorithms and impressive expert tagging system, its Music Genome Project, help a user's station actually improve based on his or her tastes over time. There's little doubt, in terms of product quality, that Pandora's beats traditional radio.

I'm staying on the sidelines for now
Right now, there are two reasons I'm still unconvinced when it comes to Pandora stock:

The first is Pandora's slowing growth rate. Pandora's listening-hours update for December is cause for concern. Pandora was cheered almost universally for increasing listening hours 13% in December. But from what I can tell few people noticed that this figure was actually the slowest growth rate Pandora has registered in some time.

The second is pricing. I know looking for value in growth stocks like Pandora is a fool's errand. But given Pandora's negligible history of profits or cash flow, I'm still unsure whether it'll ever be able to live up to the massive potential its current plus-$6 billion market capitalization implies.

Plenty of investors have sat on the sidelines, while game-changing businesses like Pandora have revolutionized industries. I understand I'm certainly running the risk of missing out on a home-run investment by looking at Pandora so skeptically.

The move into in-car advertising gives me pause that I am indeed wrong when it comes to Pandora. But I'll need to keep digging before I'm truly convinced.