Have you ever heard of the Maldives? If you haven't, think of it as the "Hawaii of the Indian Ocean." It's a gorgeous chain of islands straddling the equator. The website for Maldives says it all in one beautiful picture:

Maldives in all its glory. Source: Maldives government.

Maldives is a gem, featuring some of most serene beaches on Earth.

Yet, what Maldives lacks is space. Sure, the country has 1,190 islands, but between all of those islands there are just 115 square miles of total space. To put that in perspective, the total area of 87 American cities is larger than this entire nation.

The Maldives' capital, Male, squeezes over 100,000 people into just more than 2 square miles. The island is so packed that there is no room for garbage disposal. About 300 tonnes of garbage a day are shipped to a nearby island which the BBC dubbed "apocalyptic": an island of garbage that grows by the day. It's terrifying.

This is Maldives' capital, Male. Kind of like a Manhattan in the middle of an ocean. Source: Wikipedia.

The problems facing Maldives might seem a world apart from the United States. After all, our country is 33,000 times as large (space is not a concern).

However, our problems might be more alike than they seem. In Maldives, the economy is based on tourism. Those tourists never see the devastation their presence brings, as it's shipped away to that "apocalyptic" island of trash each day. 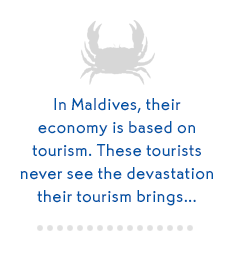 In the United States, our economy depends on information instead of tourism. Nine of the 10 largest technology companies in the world are based in the United States. America is doing so well in technology because we've secured leadership in this generation's greatest trend: mobile. However, even as millions of Americans enjoy high-speed video, YouTube viewing, and app usage on their phones, we quickly exhaust one of our greatest resources.

Americans, like the tourists of Maldives who are unwittingly helping bury the nation under garbage, are pushing one of the country's most important resources to the limits. Namely, spectrum, which carries our mobile data. The advances to fix the congestion around mobile data in the next decade could determine whether or not we unlock the next great technology revolution.

The convention is more bizarre than the city that hosts it. Today I saw a water bottle that doubles as a Bluetooth speaker, a choreographed group of dancing robots, and 3-D printed chocolate.

You've probably seen headlines about it in the news, given that 150,000 people flow through the CES each year. It's nauseating in its media coverage. I've struggled to find my own footing at the show, searching to find the trends that are more than just fluff -- trends that investors need to know.

To be sure, it's a circus of the absurd. Nonetheless, if you look beyond all the showmanship, the conference is incredibly valuable in part because you have the opportunity to talk with some of the most forward-looking and bright minds in technology.

In the three days days I've spent at the conference, the most invaluable hour was watching a keynote panel featuring the CEOs of Ericsson (NASDAQ:ERIC) and Qualcomm (NASDAQ:QCOM), and AT&T's head of Network Operations. Between Ericsson and Qualcomm, the two companies spend nearly $10 billion in research and development each year. Nearly all of that money is spent improving the wireless networks that enable our mobile lives. 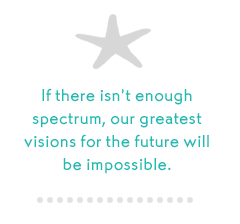 The panel was high on optimism, describing some amazing uses of technology in the coming years. Still, on one issue they were all united. If there isn't enough spectrum, our greatest visions for the future will be impossible.

How much further can this technology go?
With an event like CES there are plenty of storylines to follow. Most of the best ideas are quickly copied. A whole wing of the conference featured only small fitness trackers after their sales exploded in 2013.

Last year, 4K -- or ultra-high-definition -- televisions made their debut at CES. This year, hundreds of tiny booths of Chinese manufacturers showed off their own 4K televisions.

BMW has an exhibit showing off its self-driving cars that can be driven at racetrack speeds. Other companies, like Audi, have followed suit with their own driverless cars.

With all these technologies, you come to appreciate that a certain fabric keeps them together. Fitness wearables are cool, but they need to connect to a smartphone. Ultra-high-definition television sure look impressive, but they're nothing without content. (The big announcement around 4K at CES was that Netflix would partner with TV companies to stream its original shows in 4K.) Self-driving cars will redefine our streets, but need to be constantly connected to a network for safety reasons.

In all these areas, you begin to gain an appreciation for a technology buzz word. It's called the "Internet of Things." What's it mean? In short, billions of devices will be entering the market in the coming year, and they all need to be constantly connected to the Internet -- and to each other -- to work properly.

Next to 3-D printed chocolate, the Internet of Things looks like a pretty safe bet.

What is the Internet of Things?
While the Internet of Things sounds like a fluffy phrase, at its core, it's really just the next evolutionary step of a trend that's been sweeping the world over the past six years. Everyone has been buying up connected devices (like smartphones), and those devices are getting cheaper. 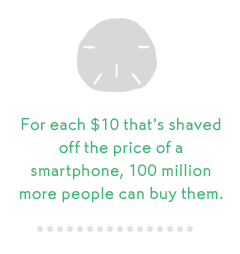 Ericsson's CEO estimated that for every $10 that's shaved off the price of a smartphone, 100 million more people can buy them. This year, we could see a billion smartphones sold. The relentless pursuit of driving down all the costs of smartphones has had a side benefit: The components inside them have gotten cheaper and smaller at astounding speeds.

With the components to connect to wireless networks (or sense changes in body movements) now so cheap, the next trend could be a hub-and-spoke model. For example, 50 cheap sensors across your body could connect to one more-expensive chip (perhaps found inside your smartphone) to monitor your health. It's not a far stretch to call the smartphone "the remote control of your life."

Qualcomm CEO Paul Jacobs described a sensor in development that when injected, would alert people up to two weeks ahead of time before they had a heart attack.

That's not a "conceptual" idea; it's reality, and it's happening right now. Beyond sensors in the body, the applications of the Internet of Things stretch only as far as we can imagine. Self-driving cars have made tremendous leaps in the last few years thanks to sensors that monitor their entire surroundings. You could even extend sensors to other uses; coils in streets could sense cars coming by and charge them on their commute.

Even think about a larger social problem: In the coming decades, billions of people will be moving into cities. Can we use connected sensors to control traffic, the utilities of cities, or a host of other infrastructure fixes to ensure our cities don't choke under this mass migration? 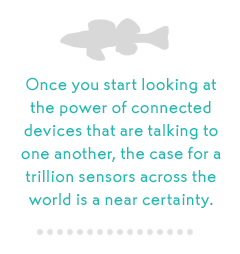 Today, we marvel at a billion smartphones sold. The astoundingly large number that technology is targeting isn't 10 billion or even 100 billion. It's a trillion. Once you start looking at the power of connected devices that are talking to one another, the case for a trillion sensors across the world is a near certainty.

How do we architect the future?
Looking back at the conversation involving Ericsson and Qualcomm's CEOs, they were both extremely bullish on Internet of Things. And why not? Both of their companies are dependent on our mobile world continuing to grow. Ericsson makes the infrastructure that supports mobile networks like AT&T, while Qualcomm gets royalties on each mobile device sold and sells some of the most popular mobile chips.

And both companies make a single, important point: The physics of the ground will always be better than the physics of the air. Yet, to enable sensors on the move, we need reliable, always-connected mobile data that's unwired.

During the dot-com bubble, overly exuberant companies helped cover the world with fiber connections that provide virtually limitless connection speeds. However, devices that aren't plugged in don't have that same luxury of limitless fiber speeds when they're sending data through the air. Air-based data is one of the world's most complex topics, and it must utilize a resource spectrum that is limited by nature.

Think back to that Maldives example. When you look at the world, all you see is people using their smartphones to FaceTime with their kids on the road, get directions, or stream their favorite television show. It just works. It's kind of like that serene beach picture of Maldives.

But the reality is that in the background, wireless networks look like that crowded capital of Maldives. Behind the scenes, they're bursting at the seams. All data travels over radio-frequency spectrum and the amount we can allocate is limited. For an comprehensive view of the United States' spectrum allocation, take a look at this chart. Beyond mobile, spectrum is allocated to radio stations, broadcasters, satellites, and a host of other uses.

The problem is that the more data and communications being sent on wireless bands, the more congested they get and data speeds either slow down or fail altogether. Compounding this problem is that all spectrum isn't created equal (certain bands are much better for fast mobile technologies like LTE), and just about all the spectrum earmarked for mobile is allocated for use.

What's holding the Internet of Things up?
The FCC -- which provisions spectrum -- has tried to open things up more for the wireless industry, but the target date for more spectrum is 2020. Not only is that goal an eon away in the time frame of bleeding-edge technology, but Cisco reports that 12 times more mobile data was sent in 2012 than all Internet traffic in 2000. Traffic from mobile devices is expected to surpass wired devices by 2016.

With mobile quickly becoming the medium for the information-based economy, how we handle our spectrum becomes incredibly important. Spectrum development becomes as significant as roads or other public services; its the path our information travels on. How we allocate our spectrum becomes a key determinant of GDP. A country with better spectrum allocation can better create technologies around the Internet of Things, and become a hub for entrepreneurs on the edge of technology.

Innovation on how to solve the issues regarding wireless infrastructure will continue from leading companies. The mobile industry is incredibly effective at getting more efficiency out of the spectrum allocated to it. Central tweaks to wireless standards are under way, as well as offloading capacity with Wi-Fi or using "small cells" for better connections to cellular networks in dense cities. 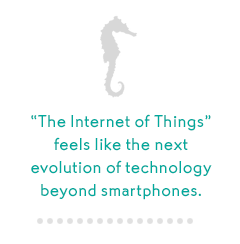 However, until we can push mobile data to where customers don't feel their use of wireless data is being metered, it's hard to imagine many of the innovations around the Internet of Things taking off. That'd be a shame, because the Internet of Things feels like the next evolution of technology beyond smartphones. It'll improve our homes, our health, our cities. It'll be exciting not just to technology investors, but everyone hoping to improve our everyday lives.

So, if you fire up your local news tonight and see a discussion on curved televisions or 3-D chocolate printing, feel free to laugh at it. There is some tremendous innovation going on at CES, and it's measured in the trillions of dollars. With a smartphone as the hub for an unwired life, the Internet of Things seems inevitable. The only question is whether mobile technology can keep up with our imaginations.