Could J.C. Penney push sales growth with better inventory management and a merchandising play borrowed from Kohl's and Target?

J.C. Penney (JCPN.Q) shares stumbled last week when the company released a holiday sales statement that simply said that it was "pleased with its performance" for the period and included a reaffirmation of the previously announced fourth-quarter outlook.

The lack of specifics suggests that the sales data will fall short of expectations, which would serve as the latest in a long line of disappointing news for the struggling retailer. Does J.C. Penney have a chance at a turnaround in 2014?

The past two years proved difficult for J.C. Penney, as the company hired Apple's Ron Johnson to perform a drastic reinvention that included store-within-store modules and the end of the company's promotional pricing. But customers balked, Johnson stepped down to allow former CEO Myron Ullman to return,and the brand now has to undo the reinvention.

J.C. Penney's long-term plans remain murky. But there are some ways that J.C. Penney could show improvement and win investor favor in 2014. And one way involves borrowing pages from Kohl's (KSS -5.82%) and Target's (TGT -1.11%) playbooks. 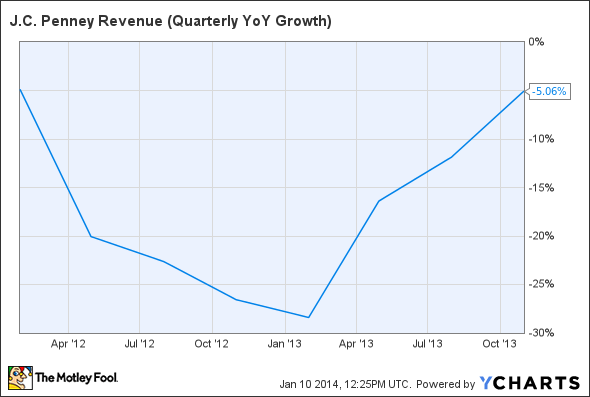 The improvement over the past year has come from J.C. Penney narrowing the amount it missed in the prior year's quarter. That's better than nothing, yet not as encouraging as actual sales growth. A slow comeback is expected with the undertaking of undoing the reinvention attempt.

But it's important to watch why sales metrics are improving. An example came in the third quarter when revenue was down more than 5% year over year but same-store sales had improved 1%. The same-store sales improvement was due to heavy promotions aimed at clearing out excess inventory, which is a model that's hard on margins.

How can J.C. Penney manage legitimate growth in both revenue and same-store sales? The process begins with solving those inventory problems.

Inventory improvements
I previously discussed J.C. Penney's problem with inventory turnover -- a metric that divides cost of sales by average inventory for a given period.The cancellation of Johnson's plans meant that J.C. Penney had to remerchandise to replace unpopular products launched during that period. And that process has tanked the company's inventory turnover.

But returned CEO Ullman stated in the third-quarter conference call that the inventory issue should resolve by spring of this year. J.C. Penney has had turnover rates in the past that fell better in line with competitors. 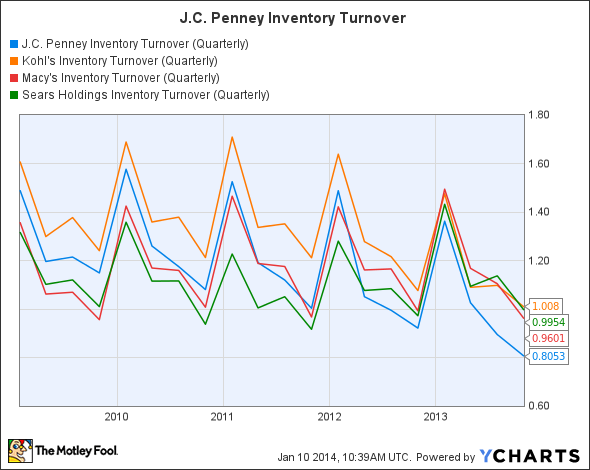 So a spring inventory turnaround is possible. And that turnaround would help boost J.C. Penney's overall health -- especially if paired with a sequential sales improvement. But the company also needs to focus on the reason product sales have improved. Promotions have their place, but an overreliance will keep margins pinched and lead to more problems in the future.

So what nonpromotional moves can J.C. Penney make to entice customers?

Securing a competitive advantage
J.C. Penney's key weakness is a lack of competitive advantage. And undoing Johnson's plans won't change that; J.C. Penney was suffering pre-Johnson -- that's why he was hired, after all. So returning to the old business model will make metrics look better by comparison for a short time but won't provide a sustainable path for the future. But that could change if the company launches a less-radical reinvention plan built around cultivating interesting, unique partnerships with higher-profile designers.

J.C. Penney has brand partnerships and store brands that must have a degree of popularity or the company would have even larger sales problems. But walk up to a mall shopper who doesn't regularly frequent J.C. Penney and ask him or her to name an exclusive brand to the store and see if the answer is a blank stare.

The company needs to establish partnerships that create more buzz. Kohl's has a similar customer base -- and promotional environment -- as J.C. Penney but drives interest with media-friendly lines from reality starlet Lauren Conrad and noted fashion designer Vera Wang. Getting the media excited about product launches can pass that excitement on to consumers.

J.C. Penney could also try the route of Target's one-off collections from high-end fashion designers that have included Alexander McQueen, Zac Posen, and Missoni. The partnered designers create Target-specific designs that sell at a far lower price point than typically associated with these names. And the limited-edition nature of the products makes for some frenzied launches.

The question is whether J.C. Penney has the leverage to establish these types of partnerships. But if the company is able to find willing parties, the benefits would prove well worth the costs.

Foolish final thoughts
J.C. Penney is wounded but still shows signs of life. If the company does clear up the inventory issues by spring, and focuses on improving its competitive advantage with new branding agreements, it could have a much better year.

Fool contributor Brandy Betz has no position in any stocks mentioned. The Motley Fool recommends Apple. The Motley Fool owns shares of Apple. Try any of our Foolish newsletter services free for 30 days. We Fools may not all hold the same opinions, but we all believe that considering a diverse range of insights makes us better investors. The Motley Fool has a disclosure policy.