The Dow Jones Industrial Average is down today, and isn't getting any help from a bad day for Chevron.

A much weaker than expected jobs report has given investors enough pause to sell off stocks slightly today, sending the Dow Jones Industrial Average (^DJI -0.17%) down 0.11% as of 3:30 p.m. EST. The Department of Labor said the U.S. economy only added 74,000 jobs last month, the fewest in three years, although the unemployment rate fell 0.3% to 6.7% because of a lower labor participation rate.

There are a number of theories as to why December's numbers were so bad. Cold weather may have kept some companies from hiring and workers from venturing out. It could also have something to do with how the Department of Labor adjusts for the seasonality of hiring, which may have pushed November's glowing report higher and December's abysmal report lower. When you average them out they show a continued slow recovery in employment, which is probably closer to the real story than the highs and lows of the last two months.

Chevron takes it on the chin
One company dragging on the Dow today is oil giant Chevron (CVX -2.42%), which is down nearly % after issuing interim fourth-quarter production results last night. Chevron's fourth quarter 2013 liquids production fell from 1,795 million barrels of oil per day (MBD) in the year-ago quarter to 1,722 MBD; natural gas production was also down slightly, although refining volume was up.

The challenge is that lower oil prices will hurt the profit made from the upstream business and increased refining margins will help ExxonMobil (XOM -0.47%) more than Chevron because it has more refining capacity.

Right now, there's an ebb and flow between whether production, refining, or marketing of petroleum products will see margins increase or decrease quarter to quarter. The challenge is that higher production costs haven't been passed to customers in the form of higher gas prices, so as oil goes up and down refiners and explorers benefit differently. 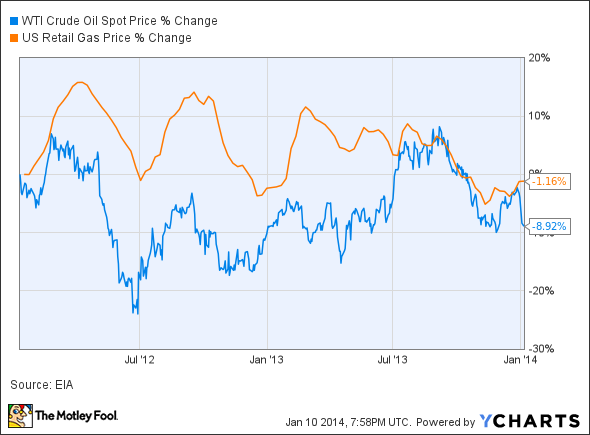 Recently, oil has been down so refiners will see the benefit, which is why Chevron is down and ExxonMobil isn't hit so hard. The trend will likely switch in the future as oil prices go up and down.

What investors should be more worried about long term is that gas prices are slowly falling and it's becoming more expensive to extract oil. That'll squeeze profits for everyone on the value chain and is bad for both Chevron and ExxonMobil.

Fool contributor Travis Hoium has no position in any stocks mentioned. The Motley Fool recommends Chevron. We Fools may not all hold the same opinions, but we all believe that considering a diverse range of insights makes us better investors. The Motley Fool has a disclosure policy.

What Makes a Stock Recession-Proof?