Pfizer Inc.'s (PFE) cost cuts and newly approved drugs may position it for profit growth over the long haul.

Big pharmaceutical companies face a reacceleration of the patent cliff in 2014. In this series of articles, I discuss how some of the biggest drug manufacturers plan to navigate challenges this year.

In the first article in this series, I took a look at Eli Lilly (LLY -0.20%) and how the patent expiration of Cymbalta will affect it this year. In this article, I analyze Pfizer, (PFE -2.01%) a company in the middle of a dramatic transition.

In its latest annual spending report, the Centers for Medicare and Medicaid Services, or CMS, announced U.S. spending on health care grew 3.7% in 2012 to $2.8 billion. That outpaced growth for the overall economy, but masks a flat-lining in spending on drugs, which edged up just fractionally to $263 billion.

Generics can be blamed for stagnant sales for drug makers as the patent cliff took a big bite out of big companies including Pfizer, which lost protection for its blockbuster Lipitor in November 2011. As a result, the percentage of prescriptions written for generics industry wide increased from 70% in 2011 to 77% in 2012.

That generic prescription growth took a heavy toll on Pfizer as U.S. sales dropped 17% and international sales fell 7% in 2012. But closing plants and cutting headcount in response to falling revenue likely better positions the company as year-over-year comparisons become easier.

That may already be playing out given Pfizer's sales were essentially unchanged in the third quarter from a year ago after taking into account currency changes. Yet trailing 12 month earnings have climbed to $3.60 per share from less than $1.50 in 2012. That improvement comes as operating margin, which nearly 21% in the quarter, has moved nicely higher from below 15% two years ago. 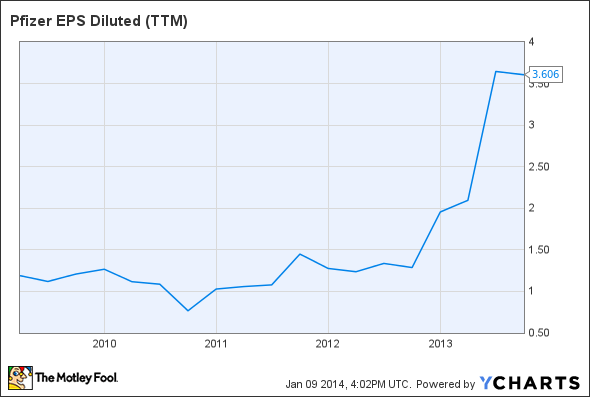 Changing course isn't easy at big companies like Pfizer, but that hasn't stopped its C-Suite from announcing big changes. First, the company unloaded its nutrition business to Nestle for more than $11 billion in 2011. Then Pfizer spun-off its animal health business, Zoetis, early in 2013. Now the company is restructuring its remaining business into three new units.

One segment focuses on therapies for immunology and metabolic disease. The second is responsible for Pfizer's vaccines, oncology and consumer products. And the third is made up of those drugs that have lost patent protection, or will lose it through 2015.

Those moves will likely help streamline sales, marketing, and drug development across the company's new and upcoming products.

Hope from new approvals and a maturing pipeline

Some of the most promising new drugs launched by Pfizer include lung cancer drug Xalkori and kidney cancer drug Inlyta. Those two drugs helped lift Pfizer's oncology sales 26% year-over-year in the third quarter to $407 million.

Another growing drug in Pfizer's product line up is autoimmune drug Xeljanz. That drug, which treats rheumatoid arthritis, saw scripts climb 53% in Q3 from Q2. Whether Xeljanz can succeed in winning business away from the heavily entrenched Enbrel, which is marketed by Amgen (AMGN -0.57%) in the U.S. and Pfizer overseas, remains to be seen.

Regardless, Pfizer's hopes are high that sales will head higher if late stage trials for psoriasis succeed. Data from those studies should be reported sometime in the second quarter.

Pfizer also thinks it has upside ahead for Eliquis, a cancer drug the company co-develops and co-markets with Bristol-Myers. Bristol and Pfizer thinks Eliquis could win share away from the long-standing Warfarin. However it faces competition from Johnson & Johnson's (JNJ -1.50%) Xarelto, which came to market earlier than Eliquis. U.S. sales of Johnson's Xarelto totaled $270 million in the third quarter.

Drugs working their way through trials include tafamidis for polyneuropathy, dacomitinib for lung cancer, and palbociclib, for breast cancer. Phase 3 data for dacomitnib should be reported early this year and Phase 2 data for palbociclib should be presented at ASCO in June.

The company has also initiated a phase 3 trial for RN316, a PCSK9 antibody. The PCSK9 space is one of the most intriguing to drug developers including Amgen.

In phase 3 trials, Amgen's PCSK9 drug, AMG-145, lowered LDL cholesterol by 52%. As a result, Amgen believes AMG-145 may have blockbuster potential. But Pfizer believes RN316 could have an edge over AMG-145 given Pfizer's trial focuses on the toughest to treat cholesterol patients. Data from Pfizer's completed phase 2b study is expected to be presented in March at the American College of Cardiology Meeting. Pfizer is also working with Merck (MRK -0.98%) on ertugliflozin, an SGLT2 inhibitor for the treatment of type 2 diabetes. If successful, that drug will eventually challenge Johnsons's Invokana -- the first SGLT2 inhibiting drug to win FDA approval. Ertugliflozin. However that market is quickly getting crowded with AstraZeneca winning approval for its SGLT-2 diabetes drug, Farxiga, this month and Eli Lilly is working its own SGLT-2 drug through trials too.

After a breather in 2013, the patent cliff steepens this year and next year and Pfizer won't escape unscathed. As much as 20% of its sales in jeopardy from generic competition over the next three years, including Celebrex and Enbrel.

However if Pfizer's restructuring succeeds in strengthening its emerging drug franchise, shareholders may find cost cuts provide more cash in support of shareholder friendly dividends in buybacks. The company boosted its dividend by 8% in December to $0.26 per share per quarter and bought back $13 billion in stock during the first nine months of 2013.