The men's clothier faces renewed pressure to accept a buyout deal from its rival.

The more management at Jos. A. Bank (NASDAQ: JOSB) digs in its heels in resistance to the merger offer made by Men's Wearhouse (TLRD), the greater the pressure for the men's clothier to acquiesce.

Eminence Capital, which excoriated Men's Wearhouse for failing to negotiate in good faith over the original tie-up bid, has now lashed out at Jos. A. Bank for engaging in the same stonewalling tactics of its rival. But it's willing to go even further than it was ready to before, because the Men's Wearhouse offer is seen as superior to Bank's, and it wants to see this deal done.

While it was willing to take both sides to court to get the management teams to move off the dime, Eminence now says it will also launch a proxy fight to nominate two directors to Jos. A. Bank's board, just as Men's Wearhouse is doing. While it supports Men's Wearhouse's own board nominees, and says it will withdraw its own candidates if the retailer's nominees are still in the running at the time of the annual meeting, it wants to make sure that the heat is as high as possible on Jos. A. Bank to complete the deal.

With Jos. A. Bank Chairman Robert Wildrick and CEO Neal Black up for election this year, there would be a wholesale change at the top for the retailer should either slate be successful.

The hedge fund owns a 4.9% stake in Jos. A. Bank, and just under 10% in Men's Wearhouse. It has argued that the merger would be good for both companies -- in fact, the companies themselves have separately argued it would be good for them -- because the men's clothing industry is highly fragmented and the clientele demographics are actually complementary.

Men's Wearhouse has a younger target demographic than Jos. A. Bank's clientele, and covering the market more broadly would enable them to better challenge department stores, which also sell a lot of men's suits. Bank has noted that Macy's alone sells $5 billion worth of suits annually, and Nordstrom sold $1.87 billion worth of men's apparel in 2012. Saks, which was recently acquired by Canada's Hudson Bay, also sold about $500 million worth.

According to NPD Group, tailored clothes for men recorded strong gains in the first half of 2013, with suit separates surging 55%, and sports coats up 14% during the January-to-June period. From October 2012 to October 2013, NPD says, men's apparel generally was up a more modest 3.5%.

Yet despite the strength in the market, both companies have been faulted for their internal practices. Men's Wearhouse ousted company founder George Zimmer, while Jos. A. Bank shareholders rejected  its CEO's pay package. Their shares, though, have outperformed the market generally. 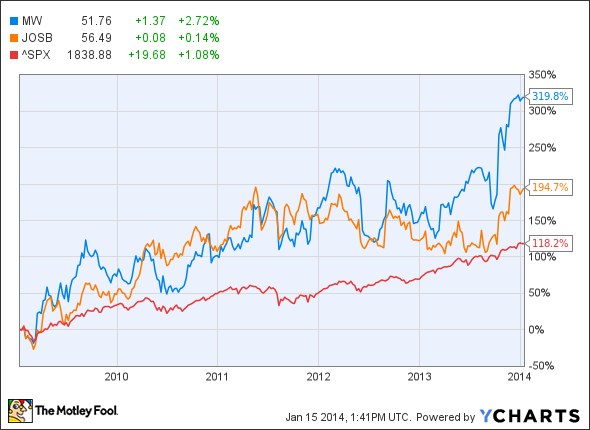 With the pressure on Jos. A. Bank being ratcheted up another notch, I don't see investors gaining any further advantage. There's more downside risk should the wheels come off the merger, so holding on to shares of Jos. A. Bank at this point seems to be the greatest danger.

Why Shares of Tailored Brands Are Falling Today
358%