Duke Energy (NYSE:DUK) has been heavily criticized for its cancelled Levy County nuclear plant. The Tampa Bay Times found that a natural gas power plant would be far cheaper, even with carbon capture and storage technology. The caveat is that if you run the analysis with natural gas at international prices, suddenly nuclear energy is the cheaper option. 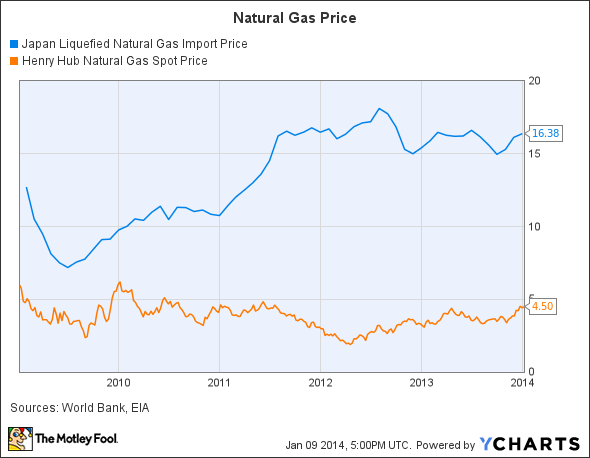 Japan's LNG imports have surged in recent times, and the nation is paying very high prices. If the proposed Levy County natural gas plant was forced to pay Japanese LNG prices, then it would end up costing $9.2 billion more than the nuclear plant over its modeled 60-year lifetime.

Natural gas apologists will point out that with sufficient time and planning, pipelines can be built to ship bigger quantities of gas to Asia at a more reasonable price. Russia is proposing a new natural gas pipeline into China with a price of around $10 MMBtu, cheaper than Japan's LNG but significantly more than the U.S. spot price. Using $10 MMBtu instead of $16.38 MMBtu means that the Levy County nuclear plant would still be cheaper by $2 billion.

North America versus the international market
U.S. utilities like Duke have a hard time justifying new nuclear plants when there is so much cheap natural gas around. Nuclear outages and a decreased level of net nuclear-plant utilization have been a drag on its earnings. Regardless Duke is not a bad company. Recent rate cases in North Carolina, South Carolina, and Ohio will help its bottom line in the coming year and to achieve earnings-per-share growth rates of 4% to 6% from 2013 to 2015.

The Asian market is a different beast. China already has 28 nuclear reactors under construction. Not only is China building nuclear plants on its own land, it is also making billion-dollar loans to countries like Pakistan to help expand its nuclear operations.

Thanks to international growth, uranium miners like Cameco (NYSE:CCJ) are promising investments. Cameco pays a nice CAD$0.10 quarterly dividend and mines some of the world's richest uranium deposits.

Recently the uranium market has been challenging. The price of uranium has fallen while the world's primary mined supply has increased. This trend will not continue forever. Cameco estimates that uranium consumption will growth 3% per year between now and 2022, but primary supply will actually fall from current levels.

Look at big and small miners carefully
Given the long-term nature of the uranium market imbalance, investing in a stable miner like Cameco is the best way to go. Its low total debt-to-equity ratio of about 0.3 and a positive profit margin of 12.1% make the company a safe investment.

You can look at smaller miners like Denison Mines (NYSEMKT:DNN), but the early stage nature of the company makes it risky. Denison Mines owns the McClean Lake joint venture with a uranium mill and a number of deposits. The downside is that Denison is expected to continue losing money for the time being. Developing a mine is not cheap. Denison has almost no long-term debt, but it only has $4.2 million in cash and equivalents. Until Denison gets the capital required to bring more producing assets online, it is best to wait on the sidelines.

You can always look at a big mining conglomerate like BHP Billiton (NYSE:BHP). It operates the Olympic Dam copper-uranium project with 2013 production of 4,102 tonnes of uranium oxide.

Still, a sudden doubling in the price of uranium would have little impact on BHP Billiton's bottom line. Iron ore provided 52% of its 2013 earnings before interest and taxes, petroleum and potash provided 27%, copper provided 17%, and coal provided 3%, leaving uranium as nothing more than a rounding error.

The bottom line
U.S. utilities like Duke are canceling plans for new nuclear plants due to the low cost of natural gas. Overseas the picture is quite different. Natural gas is not cheap, and uranium enjoys a cost advantage. Even a proposed major Chinese-Russian pipeline prices natural gas at around $10 MMBtu.

Cameco is a profitable uranium miner and a great way to play the growing uranium market. While bigger miners like BHP Billiton are also profitable, their diversified operations mean that the company has little relation to the uranium market.