It takes a lot of energy to keep the lights on in America. However, not all of the light that's shining brightly on the photo above are from America's highways and byways. Some of those lights are actually from America's energy fields. Let's take a closer look.

City of lights in North Dakota?
One of the shocking losers of America's energy boom is natural gas. We found so much of it in places like the Marcellus Shale of Pennsylvania that when natural gas is produced, along with oil, in North Dakota's Bakken Shale it has actually become a virtually worthless byproduct of that oil production. Part of the reason for this is that there simply are not enough natural gas pipelines in the region to bring the gas to consumers elsewhere. Further, because natural gas is so cheap, it's not worth it to producers to wait until the infrastructure is built. This is why as much as 29% of the natural gas produced from the Bakken Shale is flared. That's nearly a $100 million per month literally going up in flames. 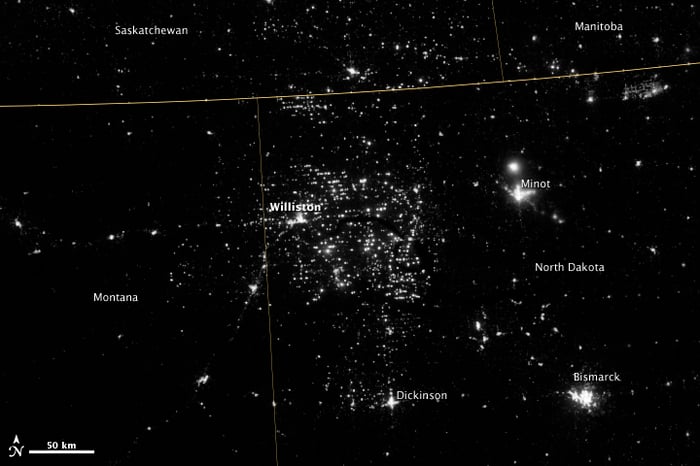 Believe it or not, this is the most environmentally responsible way to deal with that unwanted gas. Simply releasing the methane would be far more damaging to the environment than the carbon dioxide that's released through flaring. In fact, according to Drew Nelson of the Environmental Defense Fund, "one molecule of methane is anywhere from 24 to a hundred times more potent than one molecule of carbon dioxide, depending on the time frame you're looking at."

Still, the overall numbers are staggering. Flaring in the Bakken Shale alone wastes enough gas that could heat a half million homes every day. Further, it is estimated that more than two million tons of carbon dioxide are emitted through wasteful flaring. That is as much as 384,000 cars or two medium-sized coal-fired power plants.

While that gas would still be burned and those emissions incurred if the gas was used to heat American homes, at least it would be doing so in an economically productive way. Further, the gas could have been used to offset coal emissions. This economic incentive to use the gas is starting to fuel many landowners in the region to sue Bakken Shale drillers like Continental Resources (CLR) and Marathon Oil (MRO 4.19%). With hundreds of millions of dollars in natural gas going up in flames each year, these landowners are missing out on these royalties. By making it more expensive to flare gas, producers might choose to slow down drilling until natural gas pipelines can keep up with production.

Deep in the heart of Texas
Still, flaring is only part of the story behind this out-of-this-world sight. Oil and gas drilling pads run around the clock and need to be brightly lit up for safety. Further, because drilling often happens in remote regions, temporary housing is often built close to drilling sites. These also light up the night sky and are visible from space as the following picture of Texas shows.

Companies like Chesapeake Energy (CHKA.Q) are not only drilling around the clock, but are drilling more wells on multi-well pads. What this means is that Chesapeake Energy and its peers are both building bigger sites and keeping the lights on longer as it drills a number of wells. However, by doing so it's drilling more wells in less time which is saving it money as well as energy. Bottom line here, between these well lit pads and the initial flaring of natural gas at these wells, Texas' energy industry really does shine.

Final thoughts
America's energy boom is filled with both pitfalls and promise. Despite flaring, the natural gas boom has pushed coal out of many utilities, which played an integral role in getting U.S. carbon emissions back down to the lowest level since 1994. That said, we're still wasting a lot of energy, so not only are billions of dollars going up in smoke each year, but we're still lining OPEC's pockets with billions each year.