Plug Power (PLUG), FireEye (FEYE), and Kandi (KNDI) have all nearly doubled in the past month. One -- or more -- might be able to do it next month, too.

One of the best things about being a long-term investor is that the law of gravity doesn't have to apply to good stocks -- what goes up doesn't necessarily have to come back down. But some stocks can still fly too close to the sun, singing investors who bought in at too dear a price. When we're talking about momentum stocks, one investor's long-term winner could be another's warning sign, so it's important to separate the hype from the truth and find out why a stock is really soaring today and whether or not it can keep rising tomorrow.

Today we'll be taking a look at three of the best-performing stocks on the market over the past month of trading. They might still be great candidates for your portfolio, but we won't know until we dig a little deeper.

Plug Power
This tiny fuel-cell maker has taken off in January -- virtually all of its gains have occurred since the beginning of the new year. The company's preliminary fourth-quarter update was the spark that began its rise, as investors gobbled up shares after learning that Plug Power had booked $32 million in orders from a range of major industrial and retail companies. Another big boost came a week later when Plug Power announced the beginning of a hydrogen fuel cell range-extender test program with FedEx trucks. That was the high-water mark for Plug Power shares, which topped out at a near-150% gain on the month before settling in at their current near double: 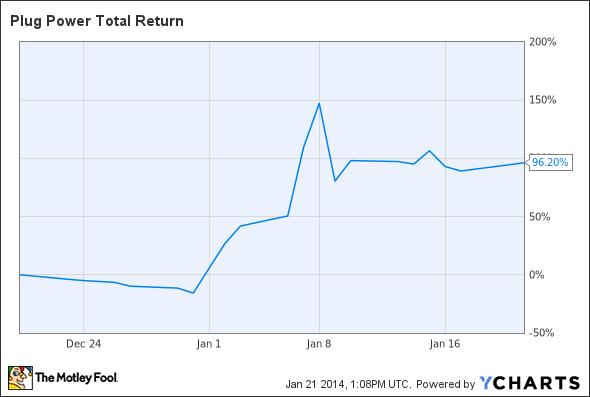 Is it time to get excited yet? Well, Plug Power still boasts a rather small market cap, even after its recent megapops, and it competes in an industry that has produced some spectacular losses despite growing revenue -- the global fuel cell industry's market size was estimated at $785 million in 2012, and it's expected to rise to $2.5 billion by 2018. Plug Power had already achieved a significant cost reduction of more than 40% in its fuel-cell manufacturing in 2012, according to the Department of Energy's Fuel Cell Technologies Market Report (released in October 2013). It stands to reason that further improvements ought to be underway, which should eventually put Plug Power on the path to profitability.

The company is already replicating the shocking rebound many solar stocks began last year after a long stretch of losses, and if it continues to follow that track, there could be a great deal more gains in store. But fuel cells are much further from widespread commercial adoption than solar panels, and Plug Power could find its market position undermined by larger industrial players if the technology finally appears profitable. This is not a stock for the faint of heart.

FireEye
Like Plug Power, FireEye began skyrocketing very early in 2014 after announcing a positive one-two punch of acquiring a rival cybersecurity specialist and upping its previous guidance for 2014 on the back of excellent sales figures. FireEye hasn't been a public company for long, but nearly all of its gains have occurred after the start of the new year: 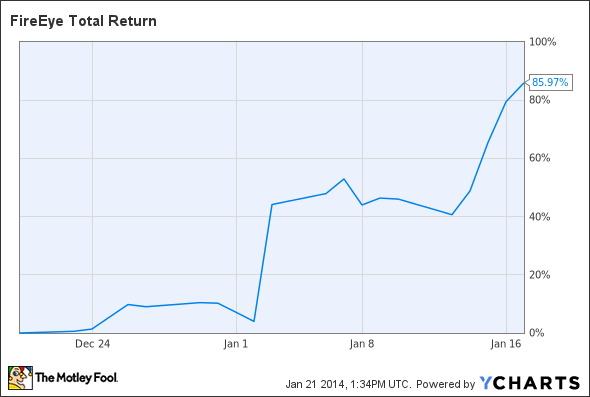 This is out of a total gain of 104.4%! FireEye's acquisition of Mandiant for roughly $1 billion in cash and stock has been heralded as "shrewd" and "game changing" by analysts covered by Investor's Business Daily, due to the complementary nature of the two companies and their already impressive growth rates. Mandiant, you may recall, was the firm that released evidence last year implicating China in a pervasive and ongoing cybersnooping effort directed at hundreds of important public and private American organizations. FireEye is also well-connected to government cybersecurity efforts, as it's been funded by CIA venture capital, according to a Seeking Alpha write-up of the acquisition.

But FireEye is now worth nearly $9 billion -- a valuation roughly 22 times its expected sales. The company has no immediate projections for profit, either, and unlike some other tech companies that mask great cash flows with losses on the income statement, FireEye is also bleeding cash. Compare that to mature cybersecurity peer Symantec (GEN 0.90%), which is valued at a bit over two times sales and has a P/E of 20 at a market cap roughly twice FireEye's. Further gains are certainly possible, but you should always be wary of analysts who shoot for the moon with stocks that are already valued in the stratosphere.

Kandi Technologies
Chinese electric- and offroad-vehicle maker Kandi already boasted a multiyear history of stock growth, but its latest surge was the difference between a good investment and a fantastic one -- from a midyear low to its latest high, Kandi shares more than tripled in value. The bounce began in late December after the company reported an improvement in EV sales. That announcement gave the company several days of supersized gains as investors digested the likelihood of Kandi's dominance over the Chinese government's 100,000-EV initiative: 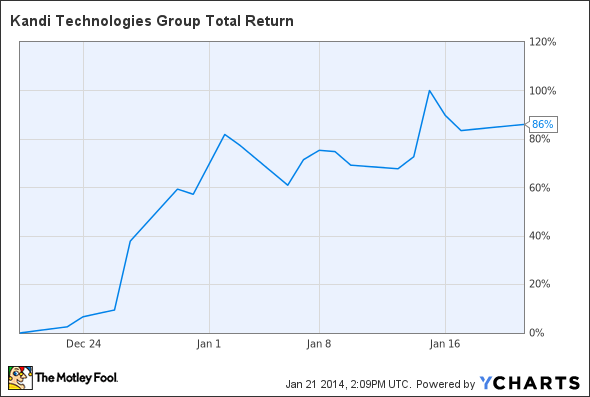 Part of this bounce no doubt reflects the same excessive EV-company optimism that pushed Tesla Motors' (TSLA 3.78%) stock up to levels commensurate with companies manufacturing millions of cars rather than mere thousands, as Kandi (like Tesla) is unprofitable and tallies its sales -- of far-lower-priced small electric cars -- in the thousands. The company's trailing 12-month revenue is just $70 million, which gives its stock a price-to-sales ratio above 7, but unlike its American peer, Kandi boasts positive free cash flow: Its latest numbers show a price-to-free-cash-flow ratio of roughly 26.5, which is well within reason for a fast-growing company on the inside track to a major Chinese windfall. Out of the three highfliers we've examined, Kandi might just be the best opportunity.