Veolia Environnement S.A. (OTC:VEOEY) announced today that it has won a £142.3 million ($234 million) waste management contract for the London borough of Brent.

The nine-year "public realm' contract begins in April, and includes an option to add on another seven-year agreement past 2023.

"We have been in Brent for over twenty years, the first London borough contract we won and one of the first in the UK altogether," said Estelle Brachlianoff, Director of UK and Northern Europe operations, in a statement today. "The special demands of Brent and its residents are complex and unique which made the winning of this contract particularly pleasing as we look to further develop the service on this valuable and prestigious contract."

Councillor Muhammed Butt, Brent Council Leader, noted that the new arrangement should result in public savings, as well as cleaner common areas with a lower carbon footprint. The infographic below depicts the newest features of Veolia Environnement's services, including grounds maintenance and a commercial waste service. 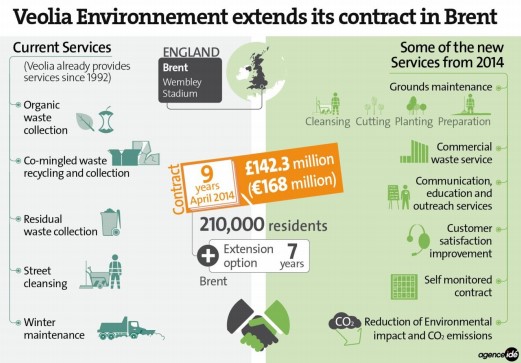