Wendy's has been a perennial second or third place market share contender in the U.S. fast food industry. That said, Wendy's now offers a more compelling investment opportunity as it outperforms peers while selling at lower valuations.

As the winter Olympics approach, I am reminded of gold medal athletes standing proudly atop the podium as their national anthems play. To those who have reflected on these events, I am sure you've noticed that the second and third place medalists display a similar level of emotion based upon their achievements. It gets you thinking that maybe second or third place is not actually that bad of a place to be; after all, others are quite enviable of that position.

In the investing world, putting money behind the secondary contenders may actually result in better returns. In the case of the fast-food industry, putting money behind Wendy's (WEN 0.04%) offers a better investment opportunity than both McDonald's (MCD -0.42%) and Burger King Worldwide (BKW.DL). Wendy's continues to outperform peers on key fast-food industry metrics with its value menu focus that is driving consistent sales gains. Wendy's management is also executing a strategy to stabilize operations and cash balances, positioning the company for future store growth and share buybacks. 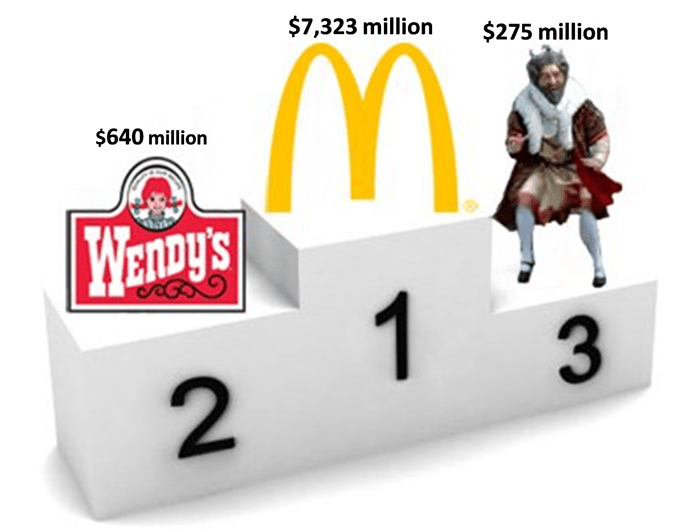 Altered value menu drives same store sales
Since mid-2013, Wendy's has been able to stabilize top-line growth through an increased ad focus on value menu items. You might recall the "chicken for a buck-buck" commercials as an example. The company changed course from earlier in 2013 after losing market share to competitors who offered a more comprehensive value menu. Wendy's now sells 21 value menu items at price points of $0.99-$1.99, compared to McDonald's which offers 15 items across similar price points. Comparable-store sales reacted favorably to Wendy's menu tweaks, with the restaurant outpacing systemwide sales for McDonald's and Burger King by 240 basis points and 220 basis points, respectively, in the third quarter of 2013. This trend has continued in the back half of 2013. Wendy's recently pre-released unaudited comparable store sales growth for the fourth quarter of 2013 of 1.9%. While peers have not released results for the same period, McDonald's disappointed investors with a U.S. comparable-store sales decrease of 1.9% in November. Such data points suggest that Wendy's is continuing to gain share by generating better sales and traffic growth.

Store divestitures stabilize cash
Alongside its menu tweaks in mid-2013, Wendy's undertook a company-owned store divestiture program to stabilize CAPEX and position the company for elevated investments in store modifications. Wendy's has divested 282 company stores to franchisees, with recent bulk transactions for 30 and 19 stores occurring in December. Management plans to sell a total of 425 stores through 2014. Divesting stores to franchisees is freeing up cash to better position the company to invest in company-owned store modifications that cost approximately $550 thousand/store. This will favorably boost sales by anywhere from 10%-20% post-revamp.

Share momentum is likely to continue
Returns for Wendy's investors in 2013 far surpassed those of peers with shareholders reaping an 86% gain. McDonald's and Burger King investors generated positive returns as well, although lower at 10% and 39%, respectively. Consistent sales increases and stabilized operations were key underlying factors explaining why Wendy's shares nearly doubled.

The company's January earnings pre-release supports the possibility that 2014 is likely to play out similar to how 2013 did. Operations have stabilized enough that the company is returning 50% of its balance sheet cash to investors through buybacks. Wendy's also reaffirmed guidance for adjusted EBITDA growth in the high single to low-double digits and bottom-line growth in the mid-teens. Sell-side analysts are confirming positive results as well, having revised EPS estimates upward in the previous four weeks with no downward revisions.

Wendy's is also in the early stages of revamping its store footprint domestically. If this is executed properly, it could position the company for investments in net store unit growth. Store counts have actually remained roughly flat over the last few years as the company closed underperforming locations as part of its turnaround process. Once results from revamped store operations become public in 2014, franchisees will likely undertake similar store-level investments to boost sales and then position the company for net store growth in coming years. At that point, shares could close the valuation gap between Wendy's, McDonald's and Burger King. Wendy's shares currently trade at a price-to-sales multiple of 1.4 while McDonald's and Burger King trade at 3.4 and 6.3, respectively.

Closing thoughts
Second or third place is not a bad result. In the case of Wendy's, placing money on the silver medalist is likely a better opportunity for investing your money. Wendy's continues to outperform its peers in comparable-store sales, its operations are stabilizing, management is providing positive guidance, and all the while its valuations remain well below the competition.