Warren Buffett claims to hardly work and maybe it's true, as his investing philosophy of picking great companies and letting them do all the work has made fortunes for Berkshire Hathaway stockholders and Buffett himself. Here's how he does it.

"Lethargy bordering on sloth remains the cornerstone of our investment style," said investing titan Warren Buffett in his 1990 letter to Berkshire Hathaway (BRK.B -0.57%) shareholders. What could the Oracle of Omaha mean?

At Berkshire we much prefer owning a non-Controlling but substantial portion of a wonderful business to owning 100% of a so-so business.Our flexibility in capital allocation gives us a significant advantage over companies that limit themselves only to acquisitions they can operate.

It also has a 50-year history of consecutive dividend increases (it currently yields 2.8%) and a 28-year history of share repurchases, fulfilling Buffett's three criteria.

Buffett's favorite daily beverage may be Coca-Cola, but it represents a smaller stake than Berkshire's largest holding, Wells Fargo.

Wells-Fargo has a dominant position, serving a third of U.S. households. Its conservative management style helped it maneuver through the financial crisis. Even through the crisis, Buffett kept buying Wells Fargo, fully expecting it to come through with flying colors.

And Wells Fargo has come through for him, repurchasing $17 million in shares in its last quarter and almost doubling its yield from 2012 to 2.6%.

Although IBM stock has been under pressure of late, Buffett doesn't mind, saying he won't be selling IBM, and furthermore: "We should wish for IBM's stock price to languish throughout the five years."

Buffett's carefree attitude is based on his buyback calculus. Even if IBM stays flat, an $11.5 billion buyback  program, along with a 12% dividend increase, makes Buffett's current shares more valuable.

And history proves more buybacks are likely: The company has returned more than $150 billion to shareholders in the form of dividends and share repurchases. The company has slashed its share count by a third in 14 years and paid a continuous dividend -- now yielding 2% -- since 1916.

Buffett has owned a stake in American Express for almost 50 years. His original 5% stake has now grown to 13.7% of the company. Its high-visibility brand and strong customer loyalty give it a moat in the competitive financial-services sector.

In 2013 the company announced a 150 million-share repurchase program adding up to $4.2 billion worth of shares in 2013 and early 2014. Since 2012 the company has started raising its dividend again after temporarily curtailing raises during the recession. The yield now stands at 1%. 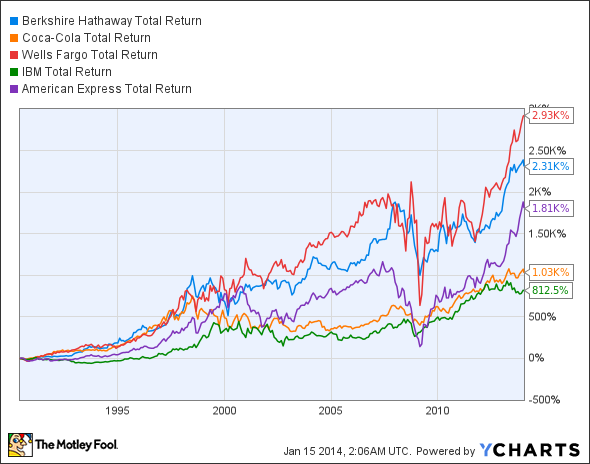 Making companies work for you
Of these great companies, Buffett said in 2012:

We expect the combined earnings of the four -- and their dividends as well -- to increase in 2012 and, for that matter, almost every year for a long time to come. A decade from now, our current holdings of the four companies might well account for earnings of $7 billion, of which $2 billion in dividends would come to us.

Warren long ago made his investments work for him by choosing companies carefully. The Big Four have done the hard work as Warren reaps dividends and capital appreciation from what they sow. Remember what Warren said:

At bottom, we [Charlie Munger and Buffett] subscribe to Ronald Reagan's creed: "It's probably true that hard work never killed anyone, but I figure why take the chance."

Social Security Has an Immigration Problem -- and It's Getting Worse
405%