According to the EIA, Powder River Basin coal stockpiles are the lowest around—that spells upside for miners with notable exposure to the basin.

It's all about the burn
Utilities have been turning to natural gas for new generating capacity. That's a long-term trend that isn't going to change, but there's still the issue of cost. For example, according to the EIA "Higher natural gas prices in 2013 resulted in the greater use of coal for electricity generation and higher domestic consumption of coal."

But coal is still in the doldrums because utilities haven't been buying more coal, they've been burning down their stockpiles. "Coal inventories in the electric power sector dropped by 31 million tons from the end of 2012 to 154 million tons at the end of September 2013. The significant drawdown reduced the stockpile to below the monthly five-year average and met the increased demand for electricity generation."

At the same time, coal miners have been shutting production. This is a healthy clearing process that's aligning coal supply and demand at a new, likely lower, level. And the coal basin set to benefit first is the PRB. "Subbituminous coal, mostly from the Powder River Basin, was burned from stockpiles at a greater rate than bituminous coal..." and this suggests there will be "...greater demand for delivery of PRB coal." 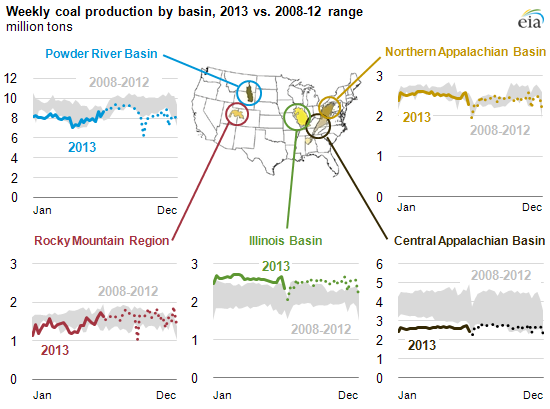 Burn it if you got it
Although Peabody's shares have fallen hard over the last year or so, the company has actually held up quite well. The fourth quarter is likely to be ugly because of one-time items that might drag the full-year into the red. However, the company's second quarter profit offset smaller losses in the first and third quarters, leading to a profitable first nine months of the year.

And those one-time items shouldn't repeat next year, which means 2014 will see easier comparisons. In addition to the company's PRB assets, it also has notable operations in the Illinois Basin, which is another domestic hot spot, and in Australia, which serves China's ravenous appetite for coal. The company is really a one-stop shop for coal exposure.

Arch hasn't held up as well as Peabody, losing money in each of the first three quarters of 2013 with little chance of a fourth quarter profit. But that could spell more upside potential. The big issue for this miner isn't PRB coal, however. That business has held up relatively well for Arch.

It's the company's metallurgical coal that you have to keep an eye on. In fact, even if the miner's large PRB business picks up, met coal, which is used in steel making, has taken such a price hit that Arch could still bleed red ink. Peabody would be a better option if you are looking for a diversified coal miner.

The sharpshooter
If you want to pinpoint PRB coal, however, Cloud Peak Energy is the top choice. That's because it only mines in the Powder River Basin. So as soon as demand picks up for PRB coal, Cloud Peak will feel the benefit. In fact, unlike the two miners above, Cloud Peak hasn't lost a penny through the coal downturn.

That's an impressive record. And the company's strong industry position will only become more obvious when utilities start buying more PRB coal to replenish their stockpiles. That's probably going to start happening this year based on the EIA's estimates.

If you are looking for a contrarian buy in the coal industry, focusing on the big PRB players is probably the right call. Peabody and Arch both offer diversified portfolios, which will dilute the benefit of their PRB assets. The only pure play is Cloud Peak. If the EIA is right, this PRB focused miner will be the biggest beneficiary.

Will these companies be able to keep pace with our "Top Stock for 2014"?