The market reacted unfavorably to China's Nu Skin probe, resulting in the decline of Herbalife's stock by more than 11%. This accompanied speculation that company could be the next target of regulators in the U.S. as well.

China's State Administration for Industry and Commerce (SAIC) recently launched an investigation against Nu Skin Enterprises (NUS 0.78%) over allegations that it is a pyramid scheme. This made some investors worry about its future, as well as those of other multilevel marketing (MLM) companies such as Herbalife (HLF 0.77%) (HLF 0.77%) and USANA Health Sciences (USNA -0.66%).

Some market observers speculated that the Chinese regulators probe on Nu Skin could extend to Herbalife. This could prompt U.S. regulators to open an investigation against it given the controversies surrounding it. They suggested that the issue could trigger Herbalife's collapse and could help activist investor Bill Ackman gain from his huge bet against the company.

Ackman accusation against Herbalife
In December 2012, Ackman alleged that Herbalife's business model is a pyramid scheme and disclosed that his hedge fund had a $1 billion short position on the stock. He is betting the company will get busted and its stock value will eventually drop to zero.

Several big-time hedge fund managers, including Carl Icahn, Daniel Loeb, and George Soros, among others, made a bullish investments on Herbalife, boosting its stock value. Ackman suffered significant paper losses on his bet against Herbalife. He continues to believe that he will succeed in his allegations against the company, however.

Despite the controversies, the company's share price surged from $30.84 to as high as $83.51 per share over the past 52 weeks. China's probe into Nu Skin affected its stock value as well.

Impact of China's probe into MLM stocks
Investors reacted negatively on China's probe against Nu Skin, sending its stock price down by more than 26% on Thursday. The company's stock declined further by over 6% to $79.47 per share on Friday, Jan. 17. The report also pulled down the shares of Herbalife and USANA as well. 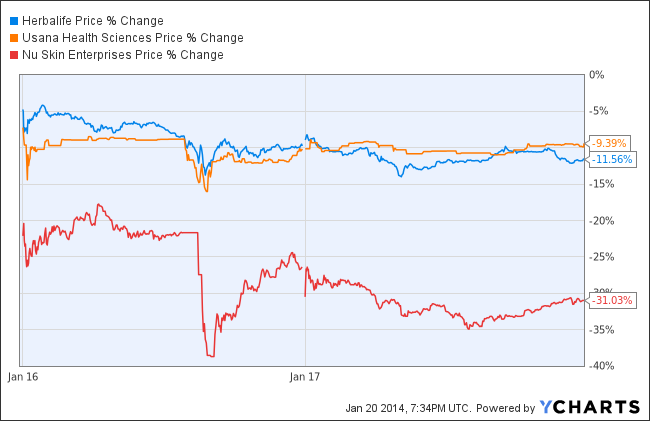 Herbalife's shares declined by almost 10% on Thursday over the issue, and the following day suffered another 2% drop to $70.20 a share. USANA's equities declined by over 10% to $59.06 per share on Thursday, but managed to regain a bit by Friday to $59.56 per share.

China is a significant market for MLM companies, as seen in the table below:

Nu Skin has the highest growth rate in China, while Herbalife is growing significantly and currently has 25 direct selling licenses in China. USANA's growth rate is flat, and it is trying to boost its business in the country. It recently announced the construction of its state-of-the-art manufacturing facility in China.

Business model similarity
Nu Skin and Herbalife are both MLM companies that engage in recruiting sales distributors, urging them to recruit more people to join more in the network. Commissions and/or bonuses are offered as encouragement on top of the income that sales distributors earn from selling products.

Mr. William Keep, dean of the School of Business at the College of New Jersey, told Reuters that Chinese regulators might also investigate Herbalife because of this similarity. He said, "Nu Skin and Herbalife are absolutely similar. And it would not be a large leap for Chinese officials to make that they should also look at investigating Herbalife."

On the other hand, Scott Van Winkle, analyst at Canaccord Genuity, commented that the reaction against Herbalife's stock in connection with the Nu Skin prove was overdone. He emphasized that Herbalife's business model in China is not the same as Nu Skin's because it has a "cautious and measured approach" in expanding its business in mainland China. He said, "Its China compensation model differs from NUS and is consistent with the model utilized by other direct sellers in the market." Winkle doesn't see much risk to the shares of Herbalife and recommended a "buy" rating with $87 a share price target.

Final Foolish thoughts
There is a very real possibility that Herbalife could be a target of investigation of the U.S. Federal Trade Commission (FTC) given its latest actions against companies selling weight loss products that were found to use deceptive advertising claims. Herbalife also sells nutritional and weight loss products. Although the FTC did not released any comment regarding whether Herbalife was among those under investigation, it is most likely given the demands for such actions not only from Ackman and several advocacy organizations but also from government officials.

Marivic Cabural has no position in any stocks mentioned. The Motley Fool has the following options: long January 2015 $50 calls on Herbalife Ltd.. We Fools may not all hold the same opinions, but we all believe that considering a diverse range of insights makes us better investors. The Motley Fool has a disclosure policy.