Whenever a bellwether like General Electric (NYSE:GE) gives results investors will want to analyze them in great detail to see what they mean for other stocks in other sectors. GE's latest earnings were solid enough, but there were many interesting subplots to the story. The global economic recovery has been pretty uneven and inconsistent since 2009, and this theme was further confirmed in its fourth-quarter report.

GE generated around a third of its segmented profits from its capital division in 2013, but what about the industrial side? The following chart demonstrates the most important industrial sectors for GE. 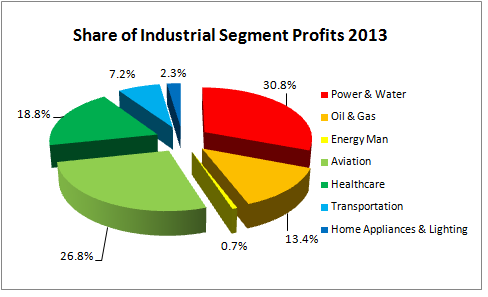 GE ended the year strong in its power and water segment with profits up 9% in the fourth quarter, but for the full year the segment's profits actually declined 8%. Of the other three largest segments, oil and gas profits grew 13% in 2013, with aviation up 16% and health care rising only 4%.

The company's order book was up 8% in the fourth quarter, and when discussing the results on the conference call, GE's management guided toward "double digit industrial earnings growth similar to the second half of '13" and "4% to 7% organic growth with expanded margins".

In short, GE looks set for another solid year, and this portends well for the industrial sector, but what are the key takeaways from the results?

Power and water, oil and gas
Gas turbine orders came in at 65 in the fourth quarter versus only 26 in last year's fourth quarter. This was somewhat surprising, because Alcoa (NYSE:AA) had already estimated that its industrial turbine end market would decline 8 to 12% in 2014. However, the difference in the outlooks may be because Alcoa's forecast is based on production while GE's positive news concerns its orders. If this logic is correct then, provided GE's orders continue to strengthen, investors might expect Alcoa's industrial turbine business to improve in future.

There was mixed news in the oil and gas segment. There are fears over capital spending plans of the major integrated companies, but on the conference call, CEO, Jeff Immelt argued, "If you look at the national oil companies versus the integrated oil companies, our view is that the NOCs really haven't backed off at all, and that's where we see a ton of activity." However, he also said that activity around North American drilling and surface was work was still "reasonably weak" and this tallies with the Baker Hughes (NYSE:BHI) US oil and gas rotary rig count. 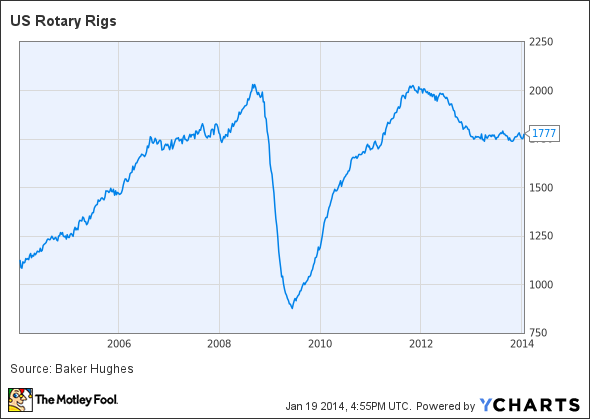 Baker Hughes is a leading oil services companies and its North American operations contributed nearly 44% of its segmental operating profit before tax in its first nine months. However, North American segment profits decreased 8% in its third quarter, but strength elsewhere ensured that Baker Hughes' overall segmental profit grew 8%. If GE's commentary is accurate, then that pattern is likely to continue for Baker Hughes.

This is good news for Whirlpool, because its outlook for North America has tended to match what GE is saying about its appliance business. In fact, in its first quarter Whirlpool estimated its full-year 2013 industry demand to grow at 2%-3%. This figure was raised to 6%-8% in the second quarter, and then 9% in the third. In the light of what GE just reported, is Whirlpool likely to upgrade estimates for 2014 at its next set of results?

The bottom line
On the whole, GE delivered a solid set of results with some interesting puts and takes in the sectors it covers. The following article will cover the health care, transportation and aviation segments. As for the segments covered in this article, there was some good news. Power and water prospects are improving and, internationally at least, oil and gas remains solid. Meanwhile, appliance and lighting sales continue to benefit from the housing recovery.