Chipotle loves rolling the dice as much as it loves rolling burritos. Here's why its latest bet could blaze a new trail for advertising.

Burrito maker Chipotle Mexican Grill (CMG 2.71%) is notorious for shunning advertising agencies. In the words of co-CEO Steve Ells, "To be able to build a brand, you need to be yourself."

Recognizing the difficulty of working with an external agency, Chipotle has embraced an unconventional (yet commonsensical) approach and built a devoted audience through savvy promotions and award-winning viral YouTube sensations. Now, your favorite Mexican fast-casual joint has a television show. It's called Farmed and Dangerous, and the four-episode miniseries will premiere on Hulu on Feb. 17. 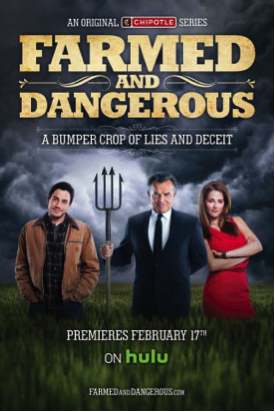 If executed well, Chipotle's bold bet on a Hulu-based show could pay handsomely for shareholders -- and change the world of advertising in the process.

A radical vision in fast food
Back in 2010, Chipotle's chief marketing officer, Mark Crumpacker, was going through a bit of an identity crisis at a company that puts little value in traditional advertising. As he described to Advertising Age at the time, "[I told our CEO], if you're not going to let me do advertising, you're kind of making this job pointless."

But co-CEO Steve Ells stood firm in his stance against big advertising campaigns. Instead, he instructed Crumpacker to double down on word-of-mouth marketing and spread the news about Chipotle's commitment to "food with integrity." The former approach served the company tremendously well in its formative years; the latter, which focused on responsibly raised animal products and local and organically grown produce, represented the future for Chipotle.

In short order, Crumpacker did both. Chipotle's been on a tear since 2010, backed by the strength of catchy promotions like the "Boo-rito" Halloween specials (the company even bought the domain Boorito.com) and highly successful short films about a chemical-dependent food-supply chain. After teaming up with Willie Nelson for the film Back to the Start, the country singer's rendition of a Coldplay single became his No. 1 downloaded hit in iTunes. The ad went on to win multiple awards, as did Chipotle's second spot, The Scarecrow. In those four years, Chipotle's shares have climbed 454% versus 62% for the broader S&P 500 index.

With Farmed and Dangerous, Chipotle's taking another bold step toward the company's ultimate mission: to change the world of fast food. The series provides a view into the world of industrial agriculture with a satirical twist. Here's a look at a trailer released by the company this week:

At the outset, Farmed and Dangerous seems to be equal parts a quirky expose on corporate spin-doctoring (think Thank You for Smoking for food) blended with the firepower (no pun intended) of a Will Smith action flick.

At first glance, it might seem as though Chipotle's overstretching the tortilla with its newest pseudo-campaign, but that's exactly the point. From Crumpacker's perspective, the series aims to be bigger than Chipotle, instead of entirely focused on the restaurant chain. In fact, Chipotle's brand won't be found in the opening or closing credits, and the word "Chipotle" is mentioned only once in the show's four-episode season.

"We think of Farmed and Dangerous as a values-integration rather than typical product-integration," said Crumpacker. "The show addresses issues that we think are important -- albeit in a satirical way -- without being explicitly about Chipotle. This approach allows us to produce content that communicates our values and entertains people at the same time."

A not-so-hidden health agenda
Nevertheless, there is an implicit message conveyed by the series: Eat at Chipotle, a far cry from the horrible world of factory farming.

Whether the ad will effectively get this message across remains to be seen. And, in reality, Chipotle will never know. Even if millions of viewers tune in to Hulu for the premiere, it's impossible to say whether their viewing experience will subsequently heighten their cravings for a barbacoa burrito with pasture-fed beef. Who knows, perhaps by pulling back the curtain, Chipotle will turn them off beef altogether.

Even in that case, however, Chipotle will likely have accomplished its true goal: to raise awareness about our food supply, especially in the fast-food and quick-service industries. As revealed in the The Wall Street Journal this month, a recent study showed Americans are trending toward healthier options, aided by "changes in the quality of foods available and greater nutritional information available to consumers."

Chipotle's on the forefront of that trend, as are grocers like Whole Foods Market (WFM). Just last week Whole Foods launched its own program on Pivot, a cable channel aimed at millennials. While it might seem odd that two brick-and-mortar food outlets are now in the television business, Chipotle and Whole Foods see it as a natural extension beyond their core businesses. As Whole Foods' co-CEO John Mackey has stated, "Strategy follows purpose," and Whole Foods' purpose is to help the world eat healthier. If a reality TV show furthers that purpose, then Whole Foods succeeds. And the same goes for Chipotle.

Chipotle's original series, then, is an example of a paradigm shift in business for two reasons:

A new beat for business
Nearly 30 years ago one of the godfathers of the modern advertising business, David Ogilvy, said, "I do not regard advertising as entertainment or an art form, but as a medium of information. ... I don't want you to tell me that you find it 'creative.' I want you to find it so interesting that you buy the product."

Chipotle's latest ambitious project follows in that vein, but also turns the advertising objective on its head. In a world full of data-driven direct-response marketing, Chipotle's betting on a new-age campaign that simply can't be measured in a traditional way. And it's doing so without the help of an agency.

Fortunately for shareholders, Chipotle has a proven track record when it comes to taking these types of risks. Unfortunately for advertisers, companies like Chipotle are marching to the beat of a different drum.