The rumors of Intel's exit from mobile are greatly exaggerated.

When a company like Amazon chooses to invest heavily on the promise of future growth and profitability, Wall Street tends to rightfully cheer these forward-thinking growth initiatives. However, when a company like Intel (INTC 4.05%) begins such an investment cycle in difficult businesses from a technical perspective, investors see the red ink and want the company to bail on the efforts. Fortunately for long-term Intel investors, bailing is almost certainly not the path that Intel's management will choose.

Does this look like a company that will quit mobile?
At Intel's investor meeting, it gave the following chart to illustrate just how the company was shifting its investments in 2014 relative to 2012: 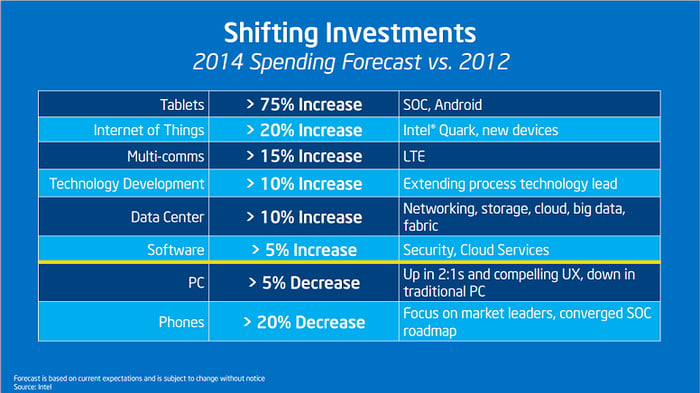 So, Intel is still very much focused on smartphone chips, particularly as these will be interchangeable with tablet chips. The investment profile shown here is not consistent with the rumor that DigiTimes had heard from its sources about Intel "quitting" the smartphone business altogether.

Why do some want Intel to quit mobile?
Look at Qualcomm (QCOM 7.53%), which is the leader in mobile chips by a wide margin. In its most recent fiscal year, the company sold $16.7 billion worth of mobile chips and generated $3.2 billion in pre-tax income. Intel, on the other hand, saw $4.1 billion in net revenue in its "Other Intel Architecture," and about half of it was from mobile, e.g., cellular basebands/transceivers, tablet chips, limited number of smartphone apps processors. It had an operating loss of $2.44 billion. What's interesting is that the Intelligent Systems group within Other Intel Architecture made a bit more than $2 billion in revenue and saw operating margin in the neighborhood of $1 billion in 2013. 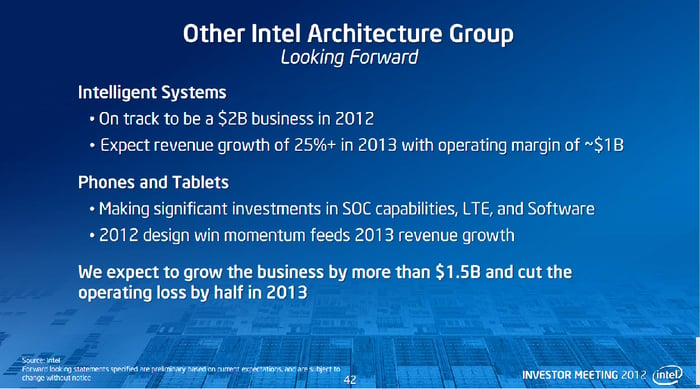 This would imply that the remaining portion of Other IA, i.e. mobile, generated revenue of about $2 billion and saw an operating loss in the neighborhood of $3.44 billion. Assuming gross margins of 40% for the non-Intelligent Systems portion of this division, this implies operating expenses north of $4 billion.

Obviously Intel has two ways to shrink this loss:

Just about all of what Intel develops for its smartphone chips -- low-power cores, SoC methodology, GPUs, connectivity, cellular, etc. -- can and will be applicable to PCs and tablets. So, the losses really wouldn't go away without compromising Intel's future in its core markets, which will need all of this IP down the line. Quitting mobile might embed these losses elsewhere, and perhaps they would be narrowed to some degree, but Intel wouldn't save nearly as much money as one might initially expect.

Intel's only way out is through
Intel is, at its heart, a computing company. Management would be remiss to not fight tooth and nail to gain a meaningful position in smartphones and tablets -- two of the fastest-growing segments of computing where the need for more performance plays right into Intel's core competencies. Intel and its investors need to accept that the company needs to make this broad investment to really win longer-term.

Note that Intel is spending about $4 billion on mobile chips, so it stands to reason that as this pipeline of products matures, the products that actually come out of Intel should actually be quite compelling. However, these investments take time. Long-term, Intel is likely to emerge as a leader in smartphone and tablet processors, but. But for now, it is still really in the investment phase.

Foolish take
This is a reality that Intel investors need to accept. In due time, patience may pay fairly hefty dividends. Until then, investors seeking more immediate gratification or success in the mobile space would be better off picking up shares of Qualcomm on a dip. It is likely to continue to be the leader here for many years to come -- although share loss is a real risk on the chip side of Qualcomm's business longer-term.

Why Salesforce Stock Was a Winner on Wednesday