Please ensure Javascript is enabled for purposes of website accessibility
Log In Help Join The Motley Fool
Free Article Join Over 1 Million Premium Members And Get More In-Depth Stock Guidance and Research
By Patrick Morris - Feb 2, 2014 at 11:41AM

President Obama has introduced a new retirement savings plan that may set millions on the road to a stable and plentiful retirement.

President Obama introduced a new plan urging more Americans to save for retirement -- and it could help millions.

President's State of the Union speeches are always full of promises that often paint the pictures of things that could and should happen, but after the lights dim and the night ends, those assurances, plans, and promises often never see the light of day.

One can only hope that is not the case with the recently announced "myRA," plan that President Obama introduced and the Treasury Department has since created.

What it is
In the words of the White House, myRA is "a new simple, safe and affordable 'starter' retirement savings account that will be offered through employers and will ultimately help millions of Americans begin to save for retirement."

The plan will offered via a familiar Roth IRA account -- which is another IRS-sanctioned retirement plan that allows individuals to contribute after-tax dollars up to $5,500 per year to invest tax-free -- and seemingly will be provided through any bank that offers retirement accounts like Bank of America (BAC -1.38%), Wells Fargo (WFC -1.30%), or TD Ameritrade (AMTD).

It will be aimed primarily at the millions of citizens who currently don't have a retirement option through their employers -- and contribution levels can start at just $5 through automatic deductions. There will be little to no cost to those employers, and individuals can save up to $15,000 over the course of 30 years to their myRA before it is transferred into a traditional Roth IRA account.

While the money is in the myRA account, it will be invested in the Thrift Savings Plan Government Securities Investment Fund ("G Fund"), which is government guaranteed. In addition, there is no chance the principal of the account -- what is contributed -- will go down in value. A person can withdraw their contributions tax-free.

Why it matters
Although $15,000 doesn't sound like a ton of money when considering what is needed to save for decades of retirement, it could actually result in an incredible amount of savings over the course of a lifetime.

If we use an example of a 25-year old who starts saving $1,500 per year via the myRA, she will max out the plan after roughly eight years -- assuming the money grows at 5.7% per year (the historical G Fund annualized return since it began in 1987).

Let's say that person wasn't sure if she was going to need that money during those eight years, but now has built up enough savings, and she can afford to take a little more risk. 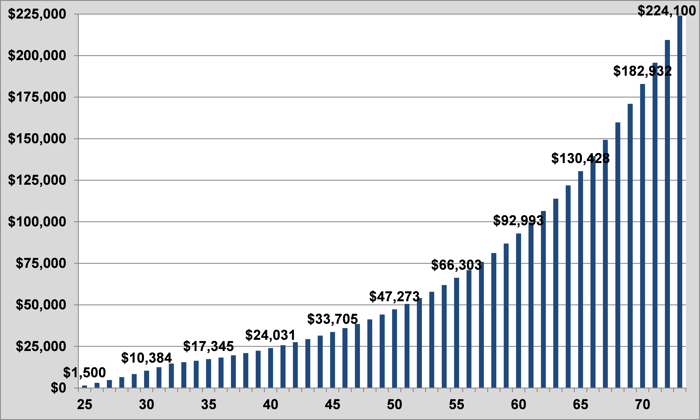 Warren Buffett, the world's third-richest man and one of the best investors ever, was recently asked, "What's the biggest mistake we make when it comes to money?" he noted simply:

Well, I think the biggest mistake is not learning the habits of saving properly early. Because saving is a habit.

Obama said the intention behind myRA was that it "encourages folks to build a nest egg," and if it can instill the habit of saving early, that Buffett describes, it could mean monumental benefits to countless individual Americans.

No matter what you think of President Obama, the reality is, the creation and use of the myRA plan could be the critical step for millions to begin their way to financial freedom and the safe retirement we all desire.