In January, a number of tech stocks significantly outperformed or unperformed the S&P 500. Given that volatility often presents unique buying or selling opportunities, it's worth taking a look at some of these big movers. Here is the story of three of tech's big movers in January: Facebook (META -0.23%), Apple (AAPL 0.56%), and Baidu (BIDU 4.50%). 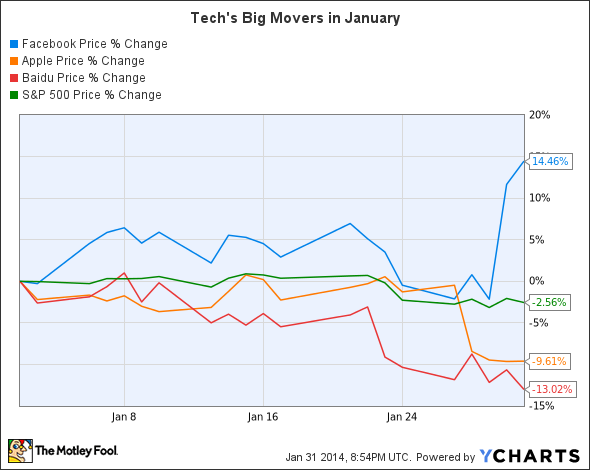 Facebook continues to dominate mobile
While the S&P 500 lost more than 2% in January, Facebook was a big winner for investors, gaining more than 14%. This gain is sweet icing for a stock that was already up 110% in 2013 compared with the S&P 500's 32% gain in the same period. What drove the stock's outperformance in January? The same factor that drove the surging stock in 2013: Facebook's mobile domination.

Facebook's mobile ad revenue now accounts for 53% of total revenue, compared with 23% in the year-ago quarter. And total ad revenue during that period is up a whopping 76%.

Apple disappoints
Apple shares fell 13% in January. The underperformance can be attributed to less-than-expected iPhone sales in Q1. With iPhones accounting for 56% of Apple's revenue, the market places a huge empasis on the company's iPhone sales. iPhone sales of 51 million units came in 4 million short of analysts estimates and single-digit year-over-year growth in the product segment's units spooked investors. Record iPhone sales along with growing revenue and EPS weren't enough for the Street, apparently.

Baidu cools off
Since the company didn't make any major announcement or report quarterly earnings in January, the reason for Baidu's decline is more difficult to lay a finger on. But a look at the stock's recent performance suggests that the sell-off may simply be a result of some investors taking gains on a stock that has performed very well recently. Perhaps the stock's underperformance in January simply represents a cooling-off period before it reports fourth-quarter results in February. 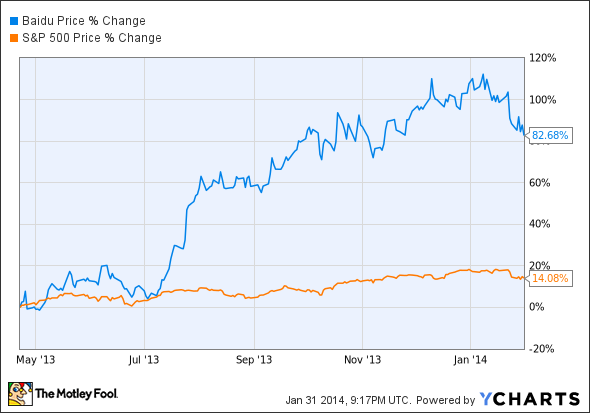 The overarching story driving Baidu's business remains positive. As the country's Internet adoption of just 42% continues to expand from the aggressive rollout of 3G and 4G networks in the country, secular growth in digital advertising looks poised to persist for years. As China's dominant search engine, Baidu is positioned to benefit from marketers' inevitable shift to increasingly larger digital ad spend as the Internet takes hold of the world's most populous country.

Opportunities?
Looking at the three big movers in tech, two of the three stocks could present investors opportunities.

While Facebook's surprising performance is enough for investors to be incrementally more confident in the social network's story, the stock price has already reacted accordingly. The implications of Facebook's stellar results and its surging stock are twofold. First, the surging stock price has erased buying opportunities for interested investors. Second, the stellar quarter means there is a fundamental reason for the surge in the stock price, so Facebook shareholders should continue to hold the stock.

For investors interested in Apple and Baidu, however, the sell-off could present a solid buying opportunity. For both businesses, the story remains unchanged while their stocks trade lower.