A $19 trillion opportunity has opened up. Here's how you can benefit. 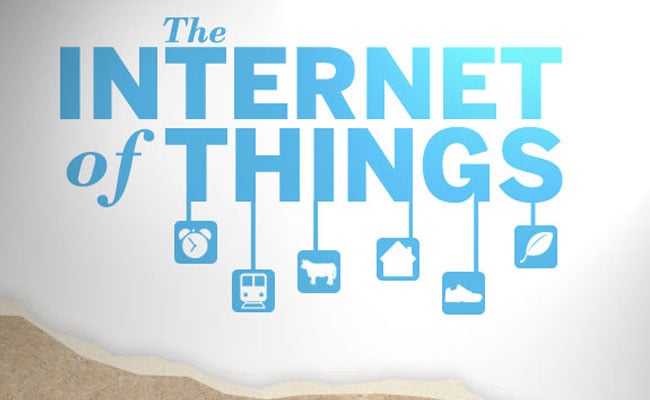 The image you see above is the beginning of an infographic from a Cisco (CSCO -1.50%) blog written back in 2011. The author, Dave Evans, happens to be Cisco's "Chief Futurist," and he outlines the potential of the Internet of Things -- machines communicating with each other -- in an uncomplicated manner, beginning with a simple alarm clock.

What is it?
You have a number of inanimate objects at home -- alarm clocks, a treadmill, your car, your mobile devices etc. Presently, chances are that it is your smartphone that helps you organize much of your day -- tracking your fitness, providing traffic information, or even controlling the lights and other electrical equipment. However, all this needs you to input commands. Without commands from human beings, none of it will work.

Now, imagine that you are sleeping. Your day begins when the alarm clock rings to get you out of bed. But then, there are certain contingencies waiting for you on a particular day -- an accident on your way to work, or a delay in the meeting you were scheduled to attend.

What if your alarm clock somehow knew of these events and adjusted its ringing schedule accordingly. The clock received alerts from its sources about the delayed meeting or the accident, waking you up early or allowing you extra sleep? Sounds fantastic, futuristic, Skynet-like.

Cisco's role
Cisco believes that this communication among things -- known as the Internet of Things -- will be a $19 trillion opportunity going forward, and it isn't difficult to see why. If every clock, gym equipment, car, or even a simple coffee maker comes with Wi-Fi and data, the opportunity is indeed huge.

Cisco believes that there will be 50 billion such connected objects by the end of the decade. According to a Cisco senior vice president, "We think the Internet of Everything is the biggest transition for the Internet since the birth of the Internet." And this transition, as mentioned earlier, is expected to be worth $19 trillion.

So the next question is -- how does one profit from it? The first obvious answer would be Cisco as it is spearheading this evolution. Now, being a networking and telecommunication equipment behemoth, Cisco is right in the middle of this boom. As more and more devices connect to the Internet and to each other, the amount of data should increase many times over. This should lead to more demand for Cisco's equipment, along with software, services, and other applications.

Why IoE is important for Cisco
Cisco has a dedicated team that focuses on the Internet of Everything and its various applications as this is probably its next big growth driver. Cisco's traditional business is suffering. The company had to slash its three-to-five-year growth outlook last year due to tepid sales of telecom equipment and sluggish demand from emerging markets. As such, its success in the evolution of the Internet becomes all the more important.

Hence, it wasn't surprising when Cisco recently unveiled "fog computing" to make connections in the Internet of Things easier. Through this initiative, Cisco is finally looking to incorporate computing capabilities in its routers to stop wasting resources. This works particularly well in the case of applications where data doesn't need to be sent to the cloud.

Through the Internet of Things, Cisco believes that companies will see a major boost in productivity and profits. By 2022, Cisco is of the opinion that this technology can boost corporate profits by 21% globally through its application in different areas such as manufacturing, mining, transportation, etc.

At just under 12 times trailing earnings, Cisco could prove to be a solid bet for those who are looking to profit from the Internet of Things. There's no doubt that the company has struggled recently and the Internet of Things could take a few years before making a big impact on its earnings. But, given the magnitude of the opportunity and Cisco's impressive dividend yield of 3.10%, there are enough reasons to hold the stock and wait patiently.

GE has already made some good headway in this area. Last year, it announced 14 more products related to the Industrial Internet as it aggressively goes about connecting "equipment, locomotives, or engines with sensors to monitor performance and analyze big streams of data," according to Motley Fool analyst Isaac Pino.

Last year, GE earned $290 million in revenue from the 10 Industrial Internet products that it had launched in 2012, and it already has 14 new customers for the 14 products launched in 2013. GE management believes that the Industrial Internet will help boost GDP to the tune of $10 trillion to $15 trillion in the next two decades through smarter machines that should help cost savings.

However, it shouldn't be forgotten that Cisco will be a key player in GE's Industrial Internet. The two companies are already into a partnership in this initiative as Cisco will be providing data processing and analytics to GE.

There's more
The Internet of Things is a huge concept that promises a big opportunity for the players involved -- such as Cisco and GE. However, at the ground level, there are some more companies that would play an important role in enabling the Internet of Things, giving investors more options apart from the two behemoths. It can be said that without them, machines won't be able to communicate with each other.

To find out, stay tuned for the next part of the series where I will focus on small-caps and mid-caps that will enable this revolution.

Harsh Chauhan has no position in any stocks mentioned. The Motley Fool recommends Cisco Systems. The Motley Fool owns shares of General Electric Company. We Fools may not all hold the same opinions, but we all believe that considering a diverse range of insights makes us better investors. The Motley Fool has a disclosure policy.