Xgeva and Prolia are two drugs Amgen (AMGN 0.12%) investors need to keep an eye on. Thanks to label expansion that permitted wider use of the drugs, they've been Amgen's fastest-growing products this past year. 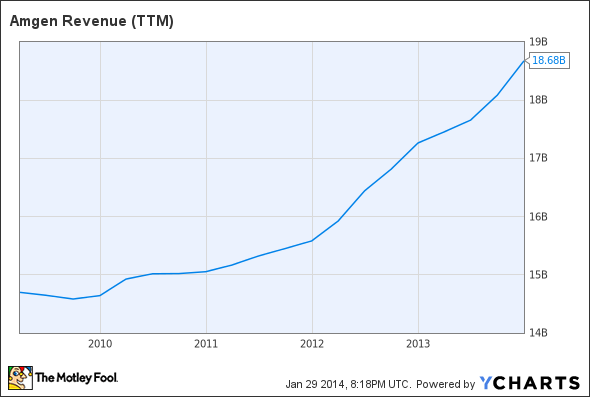 Expanding across indications
Xgeva and Prolia are different doses of the drug denosumab. They work by binding with a protein that's a key to producing osteoclasts, which are the cells responsible for breaking down bone and transferring calcium from bone fluid to the blood. By binding with the protein, the drugs decrease the number of osteoclasts, lowering both the chance of bone fractures in osteoporosis patients, and breaks and pain associated with bone metastases in patients with certain cancers, including breast and prostate cancer.

Prolia was first to win the FDA's go-ahead. The agency approved the drug in June 2010 to bulk up bone mass and strength in post-menopausal women with osteoporosis, a big and growing market given that the disease causes nearly half of all women over age 50 to break a bone in their lifetime. Prolia's label was expanded in September 2011 as a way to bulk up bone in prostate cancer patients who are at risk for fractures, including those being treated with androgen deprivation therapy -- the go-to therapy for localized prostate cancer.

The FDA gave the nod to Xgeva, a higher-dose version of the drug, shortly after Prolia's approval in 2010 after phase 3 trials showed Xgeva outperformed Novartis' Zometa in preventing bone breaks and pain in patients with certain cancers. The ability for Xgeva to outperform Zometa proved important to Xgeva's recent success, considering that Zometa was raking in more than $1 billion a year for Novartis before losing patent protection last year. Even with the loss of patent exclusivity, Novartis still sold $600 million worth of Zometa last year, suggesting plenty of running room for Amgen to grow market share.

Picking up the pace
Prolia and Xgeva combined to total nearly $1.8 billion in sales for Amgen during 2013, up 45% from 2012. Sales of Prolia jumped 58% during the year to $744 million, while revenue from Xgeva climbed 36% to a shade over $1 billion. In both cases, Amgen is citing higher unit volume as the reason behind the sales pop.

International launches are another reason for the drugs' success. Rolling out the products in Europe helped lift international sales of Xgeva 124% to $255 million in 2013. Amgen thinks it can win even more business overseas by more directly taking on Novartis' Zometa.

Prolia wasn't a slouch overseas, either. Its international sales improved to $282 million, up from $180 million in 2012.

Fool-worthy final thoughts
Its unlikely that Novartis is going to put up much of a fight, considering Xgeva's better results in the clinic and the loss of exclusivity. That means Amgen has a lot of green-field room to grow market share this year, too.

Amgen can also see more growth for these drugs down the line thanks to ongoing studies. Currently, the company has phase 3 trials evaluating Prolia in glucocorticoid-induced osteoporosis and male osteoporosis and phase 3 studies evaluating Xgeva in multiple myeloma, breast cancer, and prostate cancer in the EU.

Amgen also has a phase 2 study under way evaluating Prolia as a treatment for patients with rheumatoid arthritis. It also has phase 2 trials ongoing for Xgeva in giant cell tumor of the bone and hypercalcemia of malignancy, which is most common in breast and lung cancer, and mulitiple myeloma. Given the drug's fast growth and a heavy slate of ongoing trials, it would seem these drugs still offer plenty of opportunity for Amgen.

2 Top Healthcare Stocks to Buy for the Long Haul
360%