New orders for manufactured goods fell 1.5%, according to a Department of Commerce December report (link opens in PDF) released today. After soaring to an initially recorded record high in November, analysts had expected a slightly larger 1.8% decline. Much of December's weakness comes from a plunge in volatile aircraft orders. 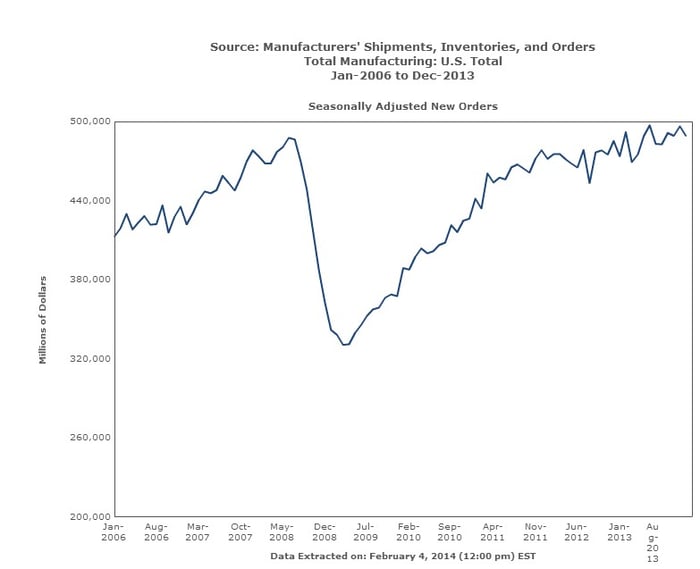 Despite December's better-than-expected report, durable-goods orders showed some reason for worry with a 4.2% drop. Transportation equipment (namely, aircraft) was a major reason for the dip, with orders down 9.7%. Investors use durable goods orders as a proxy for manufacturers' longer-term confidence in the economy. For December, demand for commercial aircraft fell 17.5% after having risen 21.1% in November. Demand for construction machinery was down 2.9% and demand for computers and other electronic products fell 6.3%. New orders for manufactured nondurable goods -- such as chemicals, paper and food -- edged up 1.1%.

Unfilled orders increased 0.4% to a record high since data were first collected in 1992, while shipments fell 1.7%. Inventories expanded 0.8%, also hitting an all-time high.

The inventories-to-shipments ratio, a statistic used to measure the sustainable flow of goods, edged up 0.01 points to 1.29, since inventories expanded as shipments declined.