Novartis (NVS) is taking heavy hits from the patent cliff, but Gilenya and Afinitor are two high growth bright spots.

At Novartis, (NVS -0.73%) patent expiration for blockbuster drugs Diovan and Zometa shaved more than $2 billion from the top line in 2013. Sales of blood pressure drug Diovan sank 20% and revenue from Zometa fell 53% as each squared off against generics for the first time.

While those lost sales are significant, they may only be the tip of the iceberg, given that the two drugs still represent more than $4 billion of Novartis' sales. That means Investors should expect a lot more of that revenue to migrate to less-costly cousins this year, creating a stiff headwind for Novartis. While two fast-growing therapies, MS drug Gilenya, which is winning share from Biogen's (BIIB 1.03%) Avonex, and cancer drug Afinitor, picked up the slack last year, helping Novartis generate net sales of $58 billion, up 2% from 2012, they'll need an even better year this year to make up the difference. 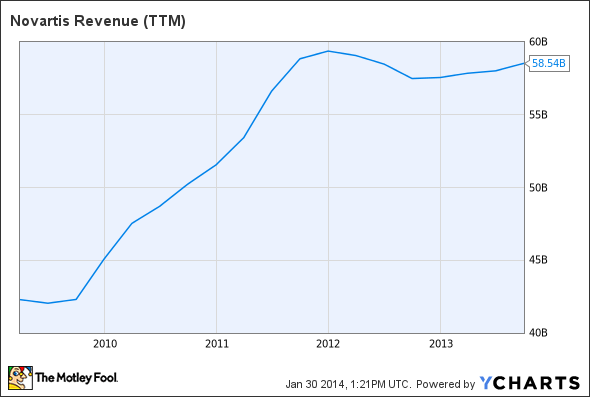 Changing of the guard
Novartis' top line won't get any relief as generics chip away at Diovan and Zometa's sales again this year. Zometa faces an additional challenge from Amgen's (AMGN -1.32%) fast-growing Prolia and Xgeva, which saw sales jump 45% to $1.8 billion in 2013. Instead, Novartis is counting on new stars Gilenya and Afinitor to drive sales higher.

So far, Gilenya is enjoying considerable success thanks to outperforming Biogen's $3 billion-a-year blockbuster Avonex during trials. Gilenya reduced MS relapses by 52% compared with Avoniex in those studies, giving Novartis a valuable marketing advantage as it rolls the drug out into more markets. As a result, Gilenya's global sales grew to $1.9 billion last year, up 62% from a year ago.Meanwhile, year-over-year sales of Biogen's Avonex were flat in the fourth quarter and up just 3% for the full year.

Gilenya's rapid growth was outdone by Novartis' Afinitor, a treatment for HER2-negative breast cancer, kidney cancer, and pancreatic cancer. Afinitor revenue totaled $1.3 billion in 2013, up 64% year over year. Even though the U.K.'s chief price watchdog recommended against paying for the $4,600-per-month cancer treatment, Afinitor's international sales still jumped from $385 million in 2012 to $618 million last year.

Planning ahead
Gilenya is going to have a much tougher time this year. Biogen's new MS drug, Tecfidera, had a terrific launch in the U.S. last summer and will roll out in Europe this year. Gilenya will also have to battle for EU market share with Sanofi's Aubagio, a drug that won reimbursement support in the U.K. in January. However, Gilenya remains the only drug to have outmatched Avonex in trials, and that should give it some support over these challengers.

Gilenya and Afinitor may also see sales growth thanks to ongoing late-stage studies designed to expand their labels. Novartis is conducting two phase 3 trials for Gilenya -- one as a treatment for primary progressive multiple sclerosis and the other as a treatment for chronic inflammatory demyelinating polyradiculoneuropathy, an inflammatory disease of the peripheral nervous system. Novartis hopes to file an sNDA for those indications in 2015 and 2016, respectively.

Novartis hopes to file an sNDA for Afinitor as a first-line treatment for breast cancer in HER2-positive patients this year. The company is also conducting phase 3 studies of Afinitor as a treatment for neuroendocrine tumors and diffuse large B-cell lymphoma.

Fool-worthy final thoughts
That's not to say Novartis is in the clear. It's not. In addition to losing Diovan and Zometa sales, the patent on its $1.6 billion drug Sandostatin expires this year, too.

Todd Campbell has no position in any stocks mentioned. Todd owns E.B. Capital Markets, LLC. E.B. Capital's clients may or may not have positions in the companies mentioned. Todd also owns Gundalow Advisors, LLC. Gundalow's clients do not have positions in the companies mentioned. The Motley Fool has no position in any of the stocks mentioned. Try any of our Foolish newsletter services free for 30 days. We Fools don't all hold the same opinions, but we all believe that considering a diverse range of insights makes us better investors. The Motley Fool has a disclosure policy.