Coca-Cola’s ad featuring a multilingual version of ‘America the Beautiful’ has sparked a hateful reaction from conservative critics.

Coca-Cola's (KO 0.88%) recent Super Bowl ad, "It's Beautiful," featured a multilingual version of "America the Beautiful." The message was elegant, simple, and touching, reflecting the melting pot environment that has made America the diverse superpower that it is today. And it's revealing an ugly level of intolerance.

Coke's message was lost on some right wing conservatives, who took to Twitter to vent their displeasure at having the unofficial national anthem being sung in languages other than English. Fox (FOX) News' Todd Starnes, for example, had this to say about the ad:

"I only speak English."

That one sentence defines Mr. Starnes' ignorance and reinforces the unpleasant stereotype of the ugly American that is often held in other countries.

In addition, claiming that "new immigrants don't speak English" is an absurd view that overlooks the fact that most children of first-generation immigrants speak their native languages at home while speaking English in public.

On a personal note, I grew up in Texas, a state that is considered conservative by modern American standards.

However, Texas is a state that embraces diversity to a higher degree than many other states, mainly due to its history as a part of Mexico and its brief time as a sovereign nation. Throughout Texas, there are cities like New Braunfels where German is primarily spoken, or Corpus Christi, where Spanish is usually spoken first.

As a result, we have had governors (George W. Bush, Rick Perry) who attempt to give speeches in Spanish. Perry has regularly supported illegal immigrants with in-state tuition rates at colleges and universities -- a stance that arguably cost him his bid for the White House in 2012.

Texas, more than other states, still holds on to the melting pot ideals that made America great in the first place -- an idea that is casually trampled by conservative commentators on Fox News and people like Newt Gingrich, who casually called Spanish "the language of living in a ghetto" during a 2007 speech.

As a result of growing up in a Taiwanese-American household in Texas, I'm able to speak English, Chinese, and Spanish, for which I am very thankful.

Unlike Mr. Starnes, I believe that speaking multiple languages is a strength, not a weakness, and the freedom to do so is what makes America one of the greatest nations in the world.

Other companies that have pushed divisive issues

In a previous article, I noted that companies can often get in trouble for voicing controversial opinions. Chick-fil-A president Dan Cathy notably ignited a firestorm in 2012 after he openly discussed his Christian beliefs and his adamant opposition to gay marriage.

Although Coca-Cola's commercial is hardly controversial to most people, other companies have previously made bold moves to promote their political positions.

J.C. Penney (NYSE: JCP), McDonald's (NYSE: MCD), Microsoft (NASDAQ: MSFT), Gap (GPS 3.05%), and IKEA have all launched ads featuring same-sex couples. The backlash against all of these ads was the same, and filled with hateful, slur-filled tirades.

Meanwhile, a seemingly harmless commercial for General Mills' (GIS 1.29%) Cheerios featuring a biracial couple (a black man and a white woman) attracted so many hateful comments that YouTube eventually disabled the comments for the video.

As much as that backlash can make us lose our faith in America, bold statements made by corporate America can inspire us to stand up against hate and ignorance.

The Gap, for example, sent a loud message to racists who defaced several of its subway ads in New York. The ad, which featured a Sikh man wearing a turban, was defaced with hateful comments such as these:

In response to the "make bombs," "stop driving taxis," and "Bin Laden" comments, the company simply changed its entire Twitter cover to the defaced poster: 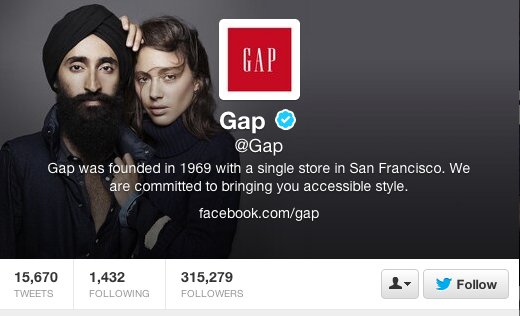 It was a graceful move that sent a loud and clear message to the ignorant masses:

It's a positive sign when companies use advertising as a tool to express their thoughts on the fragmented state of mind of America, tapping into the power of advertising to not only sell clothes, but to promote social equality and tolerance.

In my opinion, conservative critics such as Todd Starnes accomplished the very opposite of what they were trying to achieve. By attacking a harmless commercial (in the same manner they declared war on the idea of a black Santa), they have simply advertised their irrational fear and ignorance to the world.

Just remember this -- as the rest of America was enjoying Super Bowl XLVIII, Fox News anchors were hiding behind their couches, frightened to death by a simple, sweet ad from Coca-Cola illustrating the multicultural evolution of America over the years.

Coke and Pepsi Remove BVO; Prove the Power of Protests

Coke Bows to Minority Pressure to Amend its Equity Plan
376%