Earnings season wasn't so nice to Genworth Financial on the insurer's last go-around. But this time, investors are liking what they see.

Genworth Financial (GNW 0.00%) took a tumble following its third-quarter earnings report, despite tripling its bottom line year-over-year. Did the fourth quarter have the same fate in store for the insurer?

Ending on a high note
After reporting its fourth-quarter and full year 2013 results on Tuesday morning, Genworth Financial got the boost it may have expected back in October. Though the insurer didn't report a second quarter of tripled net income, it did beat all of the analyst estimates, unlike last time.

With the good news coming across the board, investors rewarded the company with a 1.61% increase during the trading day. And as of 8:00pm Tuesday evening, the stock was up another 4.4% in after-hours trading -- most likely in anticipation of the insurer's conference call the following morning before the market opens.

Genworth Financial has been in the midst of a turnaround for quite some time, mostly hinged on the improvement of its long-term care products through both various new offerings and improved profitability through pricing increases. The company started the LTC project with an estimated $265-$300 million increase in premium rates through 2017, but it needed state regulatory approval.

The company reported in its fourth quarter results that it has received approval from 41 states to date, with nearly two-thirds of the estimated gains already being realized for in-force policies. 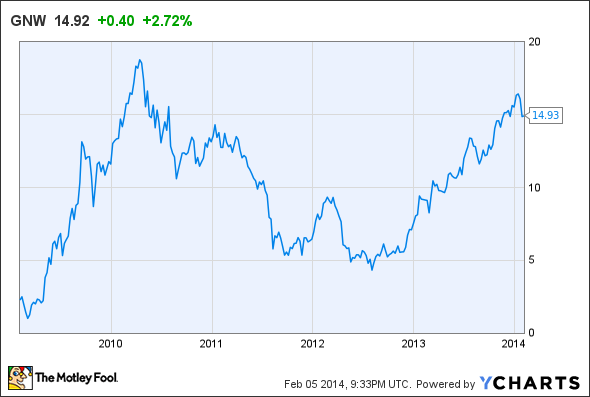 Home is where the heart (and profit) is
Mortgage insurance has been the division pushing Genworth forward over the past few quarters as it revitalizes its other segments. There's been no secret that Genworth, American International Group (AIG -1.05%), Radian Group (RDN -0.30%), and other private mortgage insurers have been raking in the big bucks as the US housing market went into high gear during 2013.

But increasing interest rates have some concerned that the housing boom is over -- leaving the PMIs to find new ways to boost their remarkable revenue growth. Genworth certainly reported a new trend that shows the impact of interest rates on the originations market.

During the fourth quarter, flow for the US was down due both to seasonality as well as a consistent burn of the company's 2005-2008 book. Though the top line for Canadian mortgage insurance showed a huge decline, the year-over-year change was positive once one-time items were removed. The overall segment was boosted by Canadian business, which reported a 20% increase in its flow, thanks to a larger origination market.

Genworth continues to benefit from the exit of the Federal Housing Authority from the mortgage insurance market. With a five-point increase during the company's market penetration is estimated to be around 13%, making it a key contender for new business if the market heats up again.

A promising future
With all of the changes that it's been making over the past few quarters, Genworth Financial has successfully positioned itself for future growth. Though it may have hit some rough patches with investors after missing the analyst-set mark, the insurer is comfortably within the "beat" category this earnings season, and will likely be there in the future quarters to come.