There was one key factor that knocked U.S. auto sales off track in January: bad weather! Virtually every automaker acknowledged the effect of record cold weather and strong winter storms that hit much of the U.S. last month. As a result, there is every reason to expect a solid bounce in auto sales in the next month or two.

Sales skid
At Ford, January sales retreated 7%. Cars took the brunt of the decline while truck sales came in almost even with January of 2013. Ford executives noted that retail sales were up double-digits in the West, where there were no major weather issues. By contrast, sales dropped significantly in the East, Midwest, and Southeast, which experienced the most severe weather.

Not surprisingly, few people want to go look at new cars on a dealer lot on a frigid day. However, retail sales weren't the only part of the industry to see a weather-related sales slump. Ford reported that some of its fleet deliveries were also delayed because of problems at its factories caused by the cold weather.

Toyota's sales also dropped 7% year over year. The company's luxury Lexus division actually posted a solid 8.8% increase, largely because of a large sales gain for the recently redesigned Lexus IS. However, this was offset by big sales drops for some of Toyota's high-volume car models, including the Camry and Prius.

General Motors saw an even steeper decline, with retail sales down 10% and fleet deliveries down 18% for a total drop of 12%. Sales of GM's new pickups remained slow because of the company's commitment to holding down incentive spending; Chevy Silverado sales dropped 18.4% and GMC Sierra sales fell 13.5%.

On the other hand, Honda had a relatively good month, with sales down just 2%. The Acura luxury division was particularly strong, setting monthly sales records for the MDX and RDX SUVs. This was offset by a modest drop for the Honda nameplate.

Fundamentals remain good
Weather may have stymied dealer traffic last month, but this represents a very short-term problem for automakers. They should be able to recapture almost all of the lost demand in February and March.

Moreover, the fundamentals of the U.S. auto market still look good. The U.S. economy has been adding jobs slowly but surely over the last few years. Housing demand is improving, and this helps automakers because rising home prices makes homeowners more confident in their financial position, and because a rebound in new-home construction will drive pickup demand in the construction industry.

Lastly, gasoline prices have remained moderate in recent months and are currently $0.25 per gallon below their level at this time last year. This provides some extra room in household budgets. Most importantly, as car buyers have become less concerned about fuel prices, sales of more profitable (but less fuel-efficient) SUVs and luxury cars have rebounded.

Foolish conclusion
The long-term outlook for automakers continues to look bright. Developed economies are recovering from the Great Recession, while developing countries provide huge long-term growth potential because of the expansion of the middle class in places like China. However, some investors appear to have panicked because of a few weak data points that have emerged in recent months, causing a broad pullback in auto stocks. 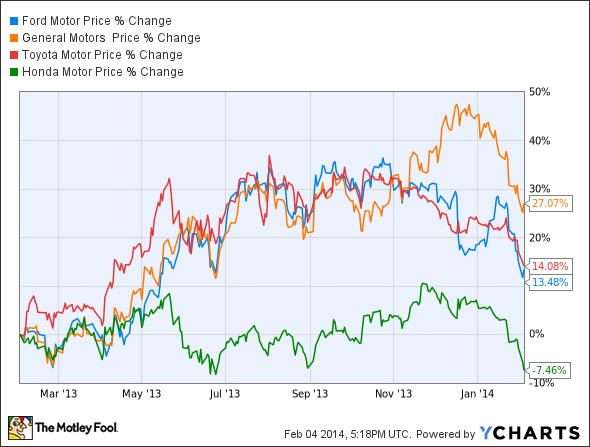 This is nothing to worry about. In fact, investors who missed out on auto stocks' strong 2013 performance now have an opportunity to put some money to work at more attractive prices. Over the next five years, there is far more upside than downside for investors in the auto sector.

Adam Levine-Weinberg has no position in any stocks mentioned. The Motley Fool recommends Ford and General Motors. The Motley Fool owns shares of Ford. Try any of our Foolish newsletter services free for 30 days. We Fools may not all hold the same opinions, but we all believe that considering a diverse range of insights makes us better investors. The Motley Fool has a disclosure policy.