At first glance Citigroup had a solid year in 2013, but there is one trend beneath the surface that is especially troubling when compared to Bank of America, JPMorgan Chase, and Wells Fargo.

With the earnings calendar behind us and earnings reports from the biggest banks in, there is no denying the one persistent trend Citigroup (C 1.77%) cannot seem to shake.

There is no denying revenues were up and expenses were down, and the bank seemed to be in an altogether much better place. However, there was one trend from its biggest business line that should raise a flag of caution for investors.

Biggest business still struggles
Citigroup has three main business lines: Global Consumer Banking, Securities and Banking, and Transaction Services, which cater to different individuals or institutions based on what customers needs and who they are. And while Citigroup isn't always thought of as a consumer-oriented bank, it turns out its consumer banking operations are indeed its biggest source of income: 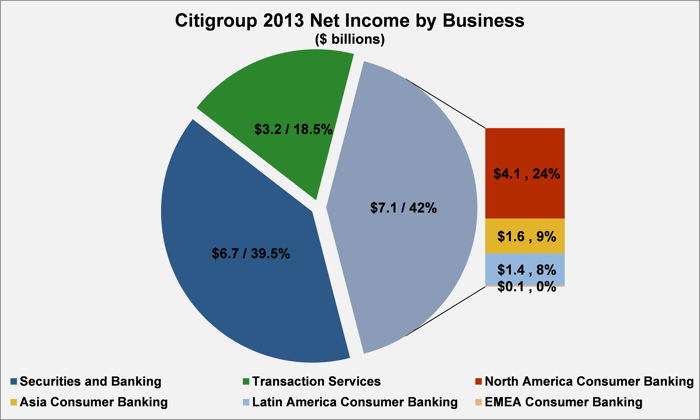 And while it is its biggest business line, Citigroup actually saw the net income of its Global Consumer Banking operations take a turn for the worse, falling 11% year over year from $8.0 billion in 2012 to $7.1 billion in 2013. In fact, the numbers it saw from its consumer operations even stood below where they were in 2011: 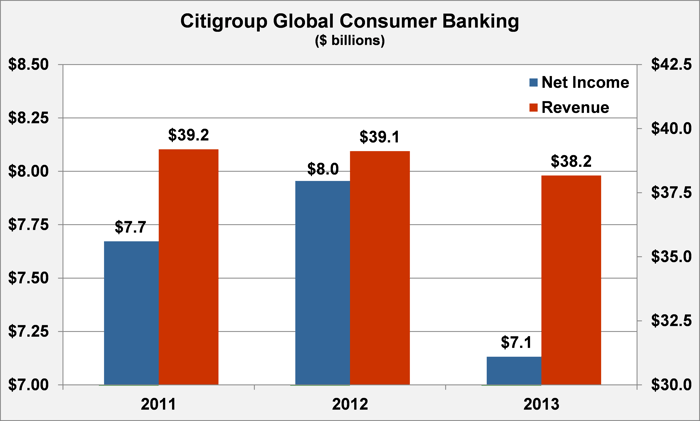 And while it's easy to think this may have been the case across all banks, it turns out, this same trend was not evident among Citigroup's biggest peers -- Bank of America (BAC 2.30%), JPMorgan Chase (JPM 1.19%), and Wells Fargo (WFC 0.80%).

On their most recent conference call, the executives at Citigroup continued to cite a drop in refinancing activity in the U.S. and a changing regulatory environment in Asia among reasons for the decline. Those two things together truly demonstrate its global footprint.

However, the reality is that reductions in refinancing activity would have been seen across all the major banks. In fact, Wells Fargo saw its mortgage banking income drop 25% from $11.7 billion in 2012 to $8.8 billion in 2013, and it still managed to have its Community Banking net income rise by 21%. It seems that a changing mortgage environment couldn't be to blame for the precipitous drop in income for Citigroup.

Certainly Citigroup has a number of compelling things going for it, but the unique decline in income from its biggest business is troubling. While CEO Michael Corbat said on the conference call that although "we didn't finish 2013 as strongly as I would have liked, I'm very pleased with the progress we made over the course of the year," one has to wonder if "progress," is the right way to describe an 11% dip in income from one's biggest business.

Citigroup's Investment Banking Business Is Struggling More Than Its Peers -- Should Investors Be Worried?
349%