Please ensure Javascript is enabled for purposes of website accessibility
Log In Help Join The Motley Fool
Free Article Join Over 1 Million Premium Members And Get More In-Depth Stock Guidance and Research
By Renu Singh - Feb 5, 2014 at 7:06AM

With focus on pork, chicken, and turkey, these three meat producers are somewhat immune to rising prices of beef.

The top four meat-protein choices in the American diet are beef, pork, chicken, and turkey. The U.S. Department of Agriculture has said that the retail cost of prime beef is up 8% over last year to an average of $8.50 a pound. Analysts at the annual convention of the American Farm Bureau in San Antonio opined that the price of steak, which is now at record highs, is going to continue to rise for the next two years at the rate of 10% per year.

This isn't good news for consumers who are already cash-strapped due to a tepid economy and the additional burden of payroll taxes. This may result in a shift to the other three choices -- pork, chicken, and turkey. Does this mean that Tyson Foods (TSN -1.22%), Pilgrim's Pride (PPC -1.64%), and Hormel Foods (HRL 0.35%) are good investments for the future? Let's take a look.

Tyson on a roll
Tyson shares have been rallying after it reported solid fourth-quarter and full-year 2013 earnings, and provided an optimistic outlook for 2014. Also, the company doubled its quarterly dividend in the same month. For fiscal 2013, Tyson reported record earnings of $2.26 a share, a growth of 15% year-over-year, surpassing its own goal of at least 10% EPS growth. This was due to a robust 4% growth in sales to a record annual level of $34.4 billion .

Acquisition-driven growth is very popular in the food industry and Tyson made two acquisitions during fiscal 2013 -- Don Julio and Circle Foods -- in order to bolster its prepared foods portfolio. Tyson is focusing on this segment as it offers the possibility of value addition and higher margins. These acquisitions should be growth drivers going forward. In addition, Tyson would be launching seven products under the Tyson Day Starts brand including biscuit sandwiches, flatbreads, and wrapped omelets to fuel growth further.

According to Nielsen data, volumes of ground beef and fresh beef declined 0.3% and 1.4% in the previous quarter, respectively, as price rose over 3%. Pork pounds increased 5% as price declined 4%. Fresh chicken was the winner, with pounds up 2%, despite a 7% increase in pricing, indicating that chicken was still viewed as a value relative to the other meat-proteins.

Tyson is the number one brand in fresh chicken in the United States, so it is in a good position to profit from this shift in trend. Tyson reiterated its fiscal 2014 sales guidance of $36 billion. This is on the back of a strategy to drive growth in domestic value-added chicken sales, prepared food sales, and international chicken production.

Better picks?
While Tyson hit a new 52-week high, Pilgrim's Pride has outperformed peers by a huge margin as shown in the chart below. 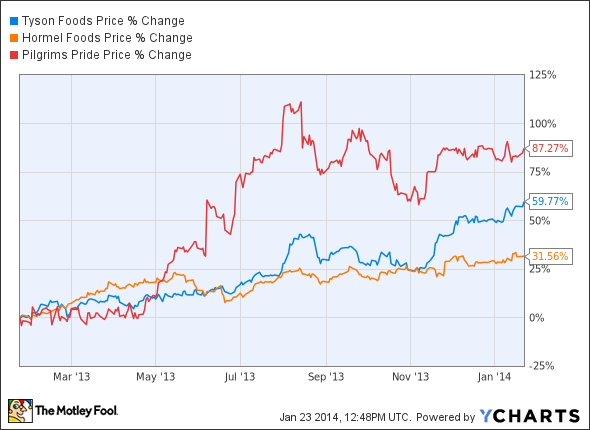 Pilgrim's Pride came up with robust third-quarter results on the back of successful execution of its strategies. For example, the company achieved a 39% year-over-year growth in exports as against a target of 30%. On the back of strong top line growth and margins, Pilgrim's Pride reported earnings per share of $0.62, up 264.7% than the prior-year quarter. Going forward, it will continue to expand the value-added segment with the new Savoro line of products in the fourth quarter.

Pilgrim's Pride believes that a diversified portfolio will fuel its growth going forward. It is also looking at higher operational efficiencies in the coming quarters and into 2014. It is also confident about achieving its value-added export growth target of 30% in the fourth quarter and beyond. On the back of these initiatives, it is expecting to improve upon third-quarter revenue of $2.14 billion, which represented a 3.4% year-over-year growth.

While Pilgrim's Pride is gaining due to the successful implementation of its strategies, for Hormel, pork is a big business as it draws roughly 70% of revenue from this area. The rest comes from turkey.

Like Tyson, Hormel has also taken the acquisition route to expand its portfolio. For example, it acquired Skippy Peanut butter , which put it in the number two position in the peanut butter market space. This acquisition allowed Hormel to register a whopping 37.9% year over year growth in the international and other segment .

Hormel registered growth in four out of five segments. The specialty foods segment registered a year-over-year decline of 14.1% due to the expiration of an agreement with Diamond Crystal Brands to sell certain sugar substitutes.

During the estimate-beating fourth quarter, Hormel reported a 7.1% year over year growth in revenue to $2.32 billion. On the back of strong revenue growth, earnings per share jumped 18.4% from the year-ago quarter to $0.58. To carry the growth momentum forward, Hormel plans to spend on marketing initiatives and brand building, and also promoting the Skippy brand during the second half of 2014.

Valuation and earnings projections
The cheapest way to benefit from the trend outlined above is Pilgrim's Pride. It trades for just under 10 times earnings, making it considerably cheaper than Hormel's P/E ratio of 23 and Tyson's 16. But Pilgrim's earnings are expected to grow at a CAGR of 9% in the coming five years, while Hormel's is 11% and Tyson's is 7%. However, both Hormel and Tyson pay dividends while Pilgrim's does not. So, all three stocks have certain advantages, and investors would be in the best position to decide depending on their risk profile.

All three companies have projected solid outlooks going forward and so, it can be said that there is upside still left.

Bottom line
With beef consumption losing steam due to rising prices, consumers in the U.S. might shift their preference toward pork, chicken, and turkey. In such circumstances, investors should take a closer look at Tyson, Hormel, and Pilgrim's Pride, as they are all looking to improve in these three segments. Moreover, all three have performed well in the past and considering the moves that they are making, they could get better in the long run.

Fool contributor Renu Singh has no position in any stocks mentioned. The Motley Fool has no position in any of the stocks mentioned. Try any of our Foolish newsletter services free for 30 days. We Fools may not all hold the same opinions, but we all believe that considering a diverse range of insights makes us better investors. The Motley Fool has a disclosure policy.