Biogen's (BIIB) Tecfidera was one of 2013's best new launches.

It's hard not to say that Tecfidera qualifies as one of the most impressive drug launches of 2013. Sales of Biogen's (BIIB -0.44%) new multiple sclerosis treatment surged following the FDA's approval last spring.

The company's new oral alternative to its top-selling Avonex racked up $286 million in third quarter sales, far above the $200 million forecast by some industry analysts. Its rapid roll-out helped it capture $876 million in revenue in 2013, including $398 million in the fourth quarter. For comparison, in the most recent quarter reported, competitor drugs Gilenya by Novartis (NVS -0.24%)  earned $521 million and Aubagio by Sanofi (SNY 8.06%) brought in about $60 million. Tecfidera's swelling sales helped lift Biogen's full year sales 26% to nearly $7 billion last year. 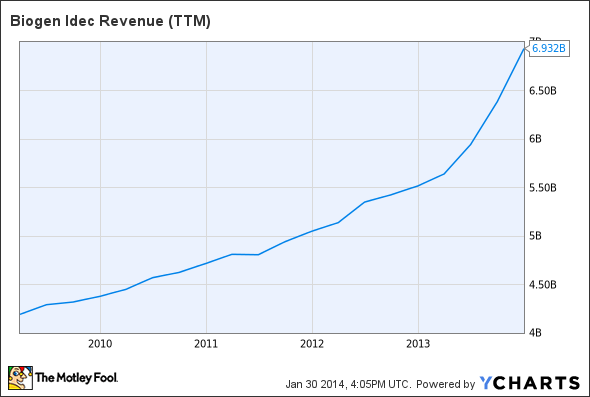 Opening act
Biogen's C-suite is likely smiling at its 2013 performance. Tecfidera blunts a lot of the risk tied to slowing sales for the company's $3 billion-a-year Avonex. That drug faces stiff competition from Novartis' Gilenya, a drug that outmatched Avonex during phase 3 trials. That superiority helped Novartis grow global sales of Gilenya 62% in 2013.

However, Gilenya's impressive success is being dwarfed by Tecfidera's. After only six months on the market, Tecfidera has already become the most widely prescribed of the three new oral drugs for treating MS relapses in the United States.

The fact that we're only in the early innings makes Tecfidera's story even more compelling. Tecfidera isn't available in most international markets yet, including Europe. Those overseas markets represent a big sales opportunity, given that roughly $900 million of Gilenya's $1.9 billion in sales came from outside the United States last year. Investors should also recognize that some of Gilenya's overseas sales success has come at the expense of Biogen's Avonex. Overseas sales of Avonex were essentially unchanged at $1.1 billion in 2013. Another $700 million worth of Biogen's international sales in 2013 came from its other MS drug, Tysabri. So the stakes and opportunity for Tecfidera in Europe are high. Analysts predict that up to a third of Tecfidera's peak $4 billion in annual revenue could eventually come from the region.

Executing is vital
Hitting analysts' projections means Tecfidera will need to shore up Biogen's European market share, capturing Avonex scripts that may otherwise be lost to Gilenya and Aubagio.

To that end, the company boldly delayed pressing for EU approval for Tecfidera until it could lock up Tecfidera's European designation as a new active substance. That designation came last fall, giving Tecfidera a 10-year window of rock-solid patent protection. Now that the European Commission has approved Tecfidera, Biogen will kick off price negotiations with individual countries.

Historically, such negotiations have been contentious. The U.K.'s chief price hawk previously balked at approving both Novartis' Gilenya and Sanofi's Aubagio, ostensibly based on their high cost. Gilenya and Sanofi cost $58,000 and $45,000 per year, respectively. It wasn't until those companies came back with aggressive discounts that U.K. regulators changed course.

As a result, the rollout of Tecfidera in Europe may be slow, steady, and deliberate. Biogen has already indicated that pricing in Europe may be as much as half of the $55,000 the company gets for the drug in the United States.

Fool-worthy final thoughts
Biogen has a blockbuster potentially worth billions a year in annual sales. If it plays its cards right, Tecfidera could significantly outstrip Avonex's peak sales, given that Avonex's $37,000 annual price tag is considerably less than Tecfidera's. Of course, that will mean blocking and tackling market share from Novartis and Sanofi. However, based on how quickly Tecfidera reached critical mass in the U.S., that may not prove too high a hurdle.

Is Biogen a Buy After It Boosted Guidance?
366%