A shrinking market, and poor inmate management, lead me to sell this high-dividend stock.

Private prisons might not be the sexiest industry, but when you can provide space for inmates at a fraction of the price of the government, you have a good business. Corrections Corporation of America (CXW 2.03%) is in the business of private prison operations in the United States. With 65 correctional facilities around the country, and 91,000 beds, Corrections Corp. of America, or CCA, has grown over the last 30 years to become and maintain its position as the industry leader.

CCA has done well in their 30-year history, and saw large gains from mega contracts during a time when the United States was locking up an unprecedented amount of people. However, now the market, as well as the company's inmate management success rates, are shrinking. Here are the main reasons I bought CCA in the first place, and the reasons I recently sold all of them.

Why Corrections Corp. was attractive
The company sounds like a low-cost alternative to federal prisons. Offering the option to outsource inmate housing and management was attractive to the government when CCA could house them for at a cost of $59 per day, compared to as much as $154 per day it costs the government to house inmates in more expensive states, such as New York. CCA reported an operating margin of $17.53 per inmate in 2012.

In states with vastly overcrowded prison systems, such as California, which at one point was at 125% of inmate capacity, an offer of help from a company like CCA was very welcome. Because of that, private prisons held nearly 10% of all inmates in 2010.

The stock itself offers a great dividend yield of 5.7% yield, and a modest P/E multiple of only 12.6; it was a good play for an income stock with seeming stability and plenty of industry growth to point to.

The only true competitor in the space is The GEO Group (GEO 1.93%), which has as market cap of $2.39 billion, compared to that of CXW at $3.89 billion. Similar to CCA, GEO group also grew from a vastly increaing market, Now, the company faces the same market declines as CCA.

Why the stock, and the industry, is now heading for a long-term decline
The prison population in the United States has finally reversed its growth trend, and populations fell by 1.7% in 2012.  In New York City alone, incarceration rates have declined 32% since 2001. Other cities will likely be following. Attorney General Eric Holder, the country's top law enforcement official, said that "[too] many Americans go to too many prisons for far too long, and for no truly good law enforcement reason." With political actions toward legalizing marijuana, relaxing strict immigration laws, and relaxing judicial punishment for non-violent crimes, this trend will likely continue during the foreseeable future. 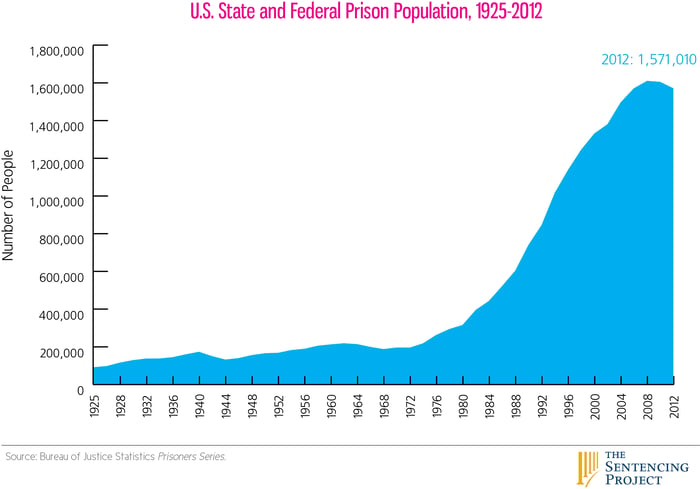 The rate of incarcerated American's is finally going down. Source: Bureau of Justice Statistics

The political environment is changing, with activists and officials alike seeking to decrease the federal and public burden of detaining such a large population of people that probably don't need to be locked up, as opposed to other forms of punishment, such as fines and public service. CCA has tried to stop this trend. According to ProPublica, CCA has donated $1.9 million in political contributions from 2003 to 2012 to favorable candidates, and has spent an astounding $17.4 million on lobbying during that time.  Unfortunately for the private prison company, the money doesn't seem to be flowing as strongly as before because the trend is reversing.

Additionally, Corrections Corp. has been the recipient of some bad attention lately concerning their management of inmates. The company was recently under suit from prisoners and families of prisoners after issues involving inmate violence in facilities in Idaho. This is only the most recent in a series of such issues.

Final Foolish thoughts
The prison industry is still incredibly large, and companies in this space are still going to continue seeing revenues in the short term. However, taking on a long-term view of the market, the trend shows that the it is shrinking, not growing, and that the time of mass lock-ups is a thing of the past. Additionally, Corrections Corp.'s own inmate management issues add a level of legal and political risk to this stock that detract from the it's otherwise attractive yield. If you still wish to put your money in the private prison industry, the GEO group may be a better play with less legal risk. Zacks analysts agree, rating CCA a No. 5 (strong sell) and GEO group a No. 1 (strong buy). Still, consider the market forces at work in an environment of more lenient punishment and incarceration in the United States.

Bradley Seth McNew has no position in any stocks mentioned. The Motley Fool has no position in any of the stocks mentioned. Try any of our Foolish newsletter services free for 30 days. We Fools may not all hold the same opinions, but we all believe that considering a diverse range of insights makes us better investors. The Motley Fool has a disclosure policy.

Socially Unconscious, but Getting It REIT