Please ensure Javascript is enabled for purposes of website accessibility
Log In Help Join The Motley Fool
Free Article Join Over 1 Million Premium Members And Get More In-Depth Stock Guidance and Research
By Matthew DiLallo - Feb 7, 2014 at 9:05AM

LINN Energy LLC stands above its peers in these three key metrics.

LINN Energy LLC (LINEQ) had a rough year in 2013. Short-sellers had their way with the company's units as questions about its accounting drew the attention of the SEC. That caused a long delay for the company's complex deal with affiliate LinnCo LLC (NASDAQ: LNCO) for oil-rich Berry Petroleum and also cost the company an extra $600 million to get the deal to close.

That's all behind LINN Energy. Investors instead can look forward to a company that stands above its peers in many of the key metrics that guide the industry. Let's take a closer look at the three areas where LINN Energy stands above the competition. 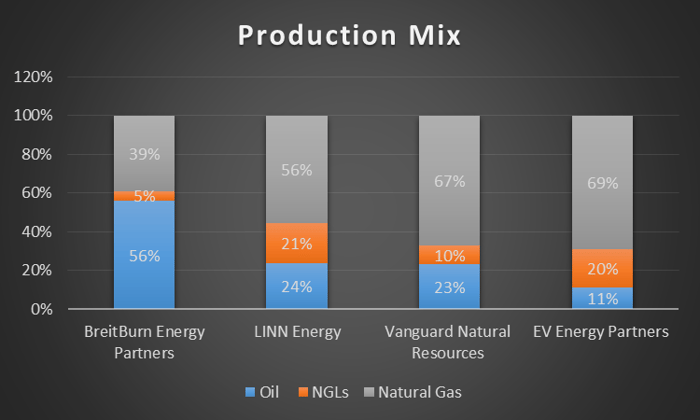 While LINN Energy is not quite as gas heavy as a peer like Vanguard Natural Resources, LLC (NASDAQ: VNR), those volumes have been a weight pulling down the company's cash flow. The big difference is that LINN Energy acquired much of its natural gas reserves when prices were higher, while Vanguard Natural Resources has been loading up on cheap natural gas reserves in recent years.

Not only that but nearly half of LINN Energy's liquids production was in more volatile NGLs. That mix, however, changed significantly once LINN Energy closed its deal for Berry Petroleum. Take a look:

Notice that LINN Energy's natural gas production is now just 46% of its total. Add to that the fact that the company is now producing more than twice as much oil as it is NGLs. Because of this, the company's risks to volatile NGL prices has nearly evaporated simply by closing the deal for Berry Petroleum. LINN Energy is not only a stronger oil producer, but overall the company has a very balanced production profile.

Hedges
One of LINN Energy's strengths is that it locks in nearly 100% of its production by hedging against commodity prices. Because of this less of the company's cash flow is subject to commodity price volatility. As the following chart shows, 100% of LINN Energy's natural gas production is hedged through 2017, which is a higher percentage and a longer duration than all of its peers. 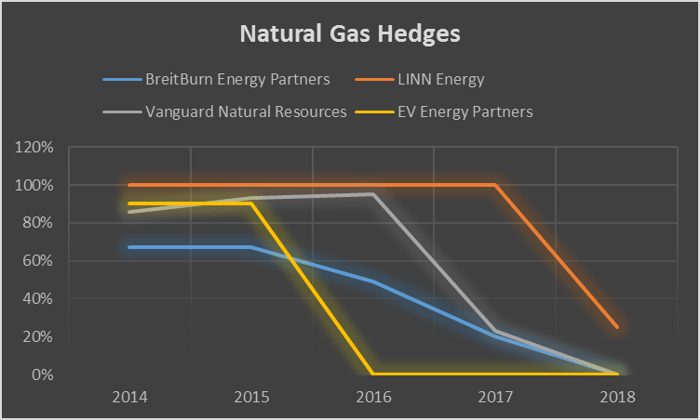 Note that this year Vanguard Natural Resources is just over 80% hedged. That leaves 20% of the company's high natural gas production open to price volatility. That's fine in today's rising price environment, but a real risk if prices cool off.

Looking at oil production we do see a bit of a different story as LINN Energy isn't yet 100% hedged, however, that is because the company just closed its deal for Berry Petroleum.

Still, LINN Energy is at least as well hedged as its peers. Further, we can expect to see the company add to its hedge position as it works to integrate Berry Petroleum into its operations. Bottom line though is that LINN Energy is still well insulated if oil prices do start to fall.

Excess cash flow
One of the reasons 2013 was a tough year for LINN Energy is because the company earned less than it paid out to investors the first two quarters of the year. A combination of factors including weather, poor drilling results and slumping NGL prices all hurt the company. However, as the chart below shows, LINN Energy has turned around. 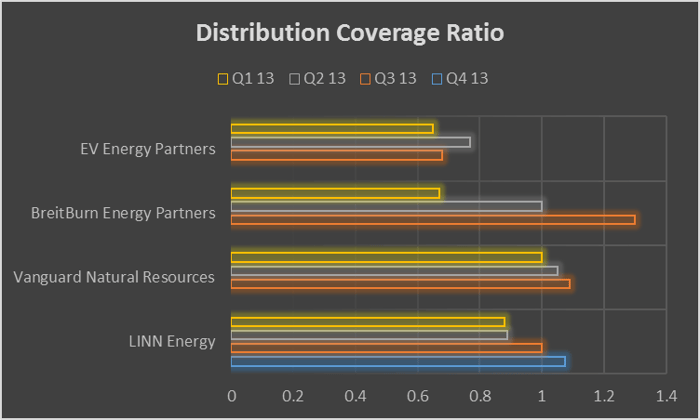 In fact, the company sees its fourth quarter coverage ratio well above the 1.0x ratio that's a warning sign for investors. This ratio doesn't include a contribution from Berry Petroleum, which closed too late in the quarter to matter. After a tough year, this probably is the one chart that LINN Energy investors should love the most.

Investor Takeaway
As these charts show, LINN Energy is starting 2014 on the right foot. The company is improving the metrics that matter, while also staying well ahead of its peers. That should yield solid growth for LINN investors in 2014 along with a very solid distribution that is likely to grow in the year ahead.

Matt DiLallo owns shares of Linn Co, LLC and Linn Energy, LLC. The Motley Fool has no position in any of the stocks mentioned. Try any of our Foolish newsletter services free for 30 days. We Fools may not all hold the same opinions, but we all believe that considering a diverse range of insights makes us better investors. The Motley Fool has a disclosure policy.