Please ensure Javascript is enabled for purposes of website accessibility
Log In Help Join The Motley Fool
Free Article Join Over 1 Million Premium Members And Get More In-Depth Stock Guidance and Research
By Brett Gold - Feb 7, 2014 at 8:10AM

Warner Brothers is looking to build a new film franchise based on the popular Lego toys. As crazy as it sounds, it just may work.

No matter what age you are, playing with Lego toys are perfectly acceptable...let's just make that clear from the onset. However, let's also be clear that making a whole movie revolving around Legos is risky. Yet Warner Brothers (a subsidiary of Time Warner (TWX)) is doing just that and while it may have seemed like an insane idea on paper, it just may work. Here's why. 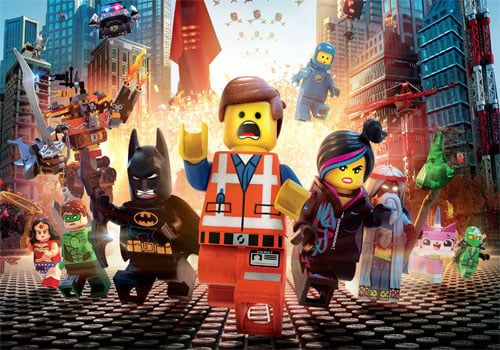 Phil Lord and Christopher Miller may not be well known outside of Hollywood, but the pair are no stranger to hit movies. The friends and partners have directed Cloudy With a Chance of Meatballs (plus its sequel) and helped launch the big screen adaptation of 21 Jump Street (which will release its sequel later this year). In other words this isn't their first time in the arena.

Lord and Miller also had an unenviable task -- after all, would you know where to start when crafting a movie about toy blocks that have been around for 70 years? Yet early reports suggest they handled it quite nicely and clearly put a lot of time and thought into the project.

For one, they didn't just make a kids film. As with most CGI-animated movies these days, there's an added layer of humor aimed at parents and adults. Again, Legos are a universal toy that stay relevant in people's lives past childhood.

Lord and Miller also made a clear choice to go all in. They pulled from every conceivable angle and corner of the Lego universe to make this a special movie. From how they conceived the look of the animation to the inclusion of a (addicting) song that both honors and spoofs those animated musical numbers that have come before it, the movie has dozens of unique touches.

Chris Pratt may not be the most recognizable name now, but give him a few months and it's possible he'll be one of 2014's breakouts. Pratt is part of the ensemble of NBC's comedy Parks & Recreation and will be featured in this summer's expected hit Guardians of the Galaxy, as well as next year's Jurassic Park reboot. He also comes across as extremely likeable, as does his wife, Mom star Anna Faris.

Here he voices the lead character Emmet Brickowoski (fitting right?) who goes up against Will Ferrell's President Business. The pair are joined by a who's who of big names including Will Arnett, Morgan Freeman, Elizabeth Banks, and on and on. Long story short, this movie's not hurting for talent.

What's clever though is how they use that talent. Warner Brothers also holds the rights to the DC Universe, so having Superman, Batman, Wonder Woman, and friends drop in wasn't hard to arrange, and the result is something unique and interesting (and that's clear just from the trailer). While Warner Brothers isn't counting on DC's large fan base to goose its box office numbers, they could still made an impact as this is one movie with crossover appeal across gender and generations. Adults with and without kids will find something of interest here.

The movie doesn't have an incredibly steep road to profitability. The movie was produced for just $60 million, which by today's standards is very reasonable. Advances in technology have lowered the costs to make a CGI film, and it doesn't take much prodding to get celebrities to lend their talents for a reduced cost -- kid films play by a different set of rules. Actors will take a pay cut or accept a smaller role to be in an animated film with the possibility of a franchise because, often times, they want something they can show to their kids. Even if it is just their voice coming through the screen, that's enough.

So realistically, what type of numbers are Warner Brothers looking at with Lego Movie? Conservative estimates have ranged from $30 million to $40 million for its opening weekend. Anywhere in that range would be a big debut for the movie and should easily give it the number one slot.

A lot of this success also has to do with Warner Brothers picking a great release date. Its main competition is aimed at two different demographics. George Clooney's Monuments Men will capture the adult audience while Vampire Academy will play to teens. Lego though has the ability pull from both pictures while cornering the kid crowd.

Now because of that and strong word of mouth AND strong brand connection, Lego could beat expectations. Remember Dr. Seuss' The Lorax shocked analysts when it did $70 million in 2012, so using that as a possible cap, $50 million is in the ballpark.

Warner Brothers knows the potential here and has already ordered work on a sequel, which was expected given the buzz. It's also not shocking given that four of the films on its 2014 slate are sequels themselves. For now though Lego is the studio's big kickoff movie of the year and will be followed by a different new release every month for the rest of the year. Executives would love the momentum to help carry them through at least the spring.

Should the film become the first megahit of 2014, the question surrounding this and other films once thought to be challenging may no longer be "will audiences come?" but "how often might they come back?"

Brett Gold has no position in any stocks mentioned. The Motley Fool has no position in any of the stocks mentioned. Try any of our Foolish newsletter services free for 30 days. We Fools may not all hold the same opinions, but we all believe that considering a diverse range of insights makes us better investors. The Motley Fool has a disclosure policy.