Cheap energy prices have eaten Exelon stock alive, but is 2014 the year for nuclear?

Exelon Corporation (EXC -0.84%) reported earnings Wednesday, beating on the top line but missing on the bottom. With cheap natural gas continuing to cut into this nuclear stock's profit, here's what you need to know.

Unfortunately, exceeding expectations for sales didn't do much for Exelon's bottom line. Adjusted earnings per share (EPS) came in at $0.50, short of estimates by $0.03.

For a peck of perspective, here's how Exelon sales and profit have fared over the past five years. At first glance, it looks like sales have soared, but Exelon's 2012 merger with Constellation Energy added a big piece of pie to Exelon's portfolio. 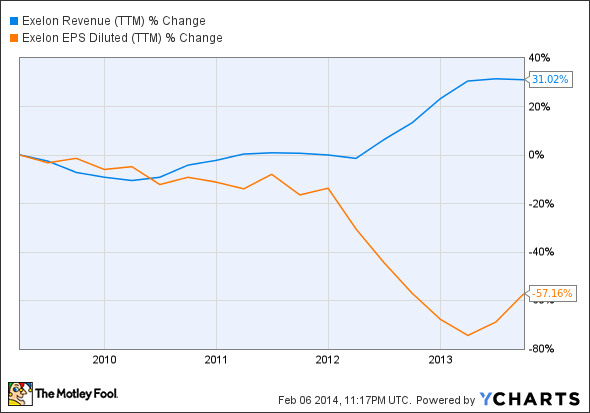 Bigger fish to fry
Exelon's Constellation merger was meant to double sales while allowing the company to fatten margins from economies of scale. It was the same move that pushed Duke Energy Corporation (DUK -0.10%)

Bigger isn't always better -- and even if it is, better might not be good enough. In both Exelon's and Duke Energy's cases, an uncompetitive energy portfolio kept shares slumping over the past year. Duke Energy squeaked out a 1.6% gain, while Exelon rummaged around in the red at -4.4%. 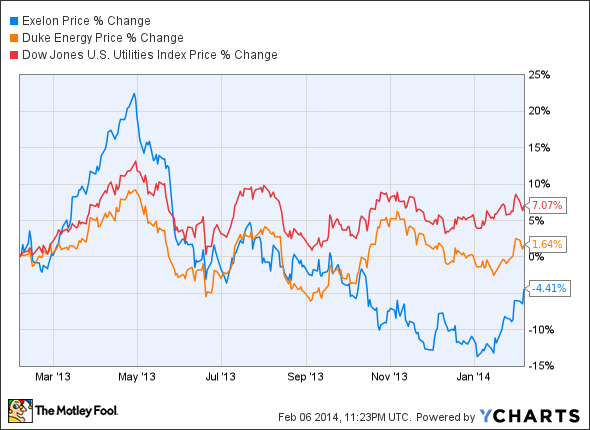 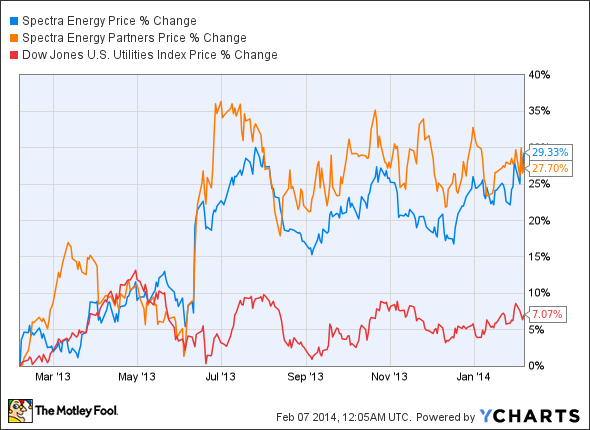 But despite natural gas price's attack on Exelon and Duke Energy, Exelon's nuclear assets are slightly different from Duke's coal. While both fuels require massive infrastructure, nuclear is still considered a clean energy source by the White House, and shouldn't face power-killing policy like coal has.

That's why, despite tough times for its nuclear fleet and a miss on Q4 EPS, shares headed 2.2% higher yesterday. Exelon shares have dropped 50% in the past five years, and investors are looking for any reason to grab a value opportunity.

The utility delivered in the mid-range of its 2013 guidance, with adjusted operating results coming in at $2.50 per share. The company is looking to keep earnings steady in fiscal 2014 with guidance between $2.25 and $2.50 per share. Although it expects its generation business to continue to suffer from lower energy prices, rate hikes for its regulated utilities should help to pad profits. 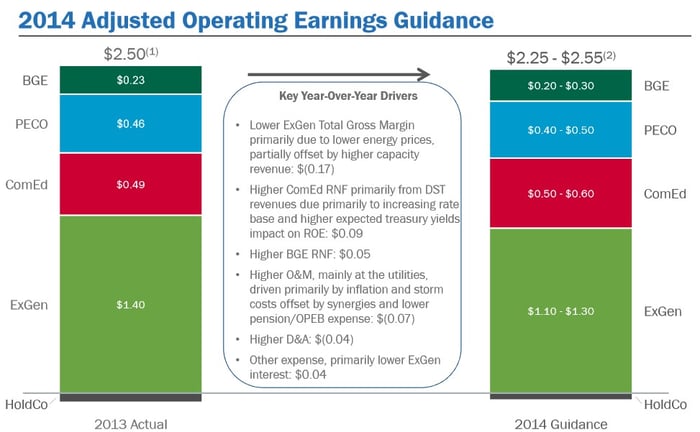 Is Exelon a buy?
Exelon can only control so much. While cheap energy killed earnings potential, the company is on track to realize $550 million in merger synergies by 2015. It's got $15 billion of investments for its utilities in the pipeline, which it hopes will result in a consolidated rate base growth of 5% and 7% annually, with expectations of at least 10% return on equity achieved by 2017

Exelon shares are in the dumps, but natural gas' destructive path is easing up, and Exelon continues to move ahead on every initiative within its control. With an enviable valuation and a 4.2% diviend yield to boot, I expect these shares to head solidly into the black for 2014.

Justin Loiseau has no position in any stocks mentioned. The Motley Fool recommends Exelon and Spectra Energy. We Fools may not all hold the same opinions, but we all believe that considering a diverse range of insights makes us better investors. The Motley Fool has a disclosure policy.

Pennsylvania's Nuclear Fumble Will Be a Costly Climate Mistake
363%