One of the most overlooked problems with Ford (NYSE:F) and General Motors (NYSE:GM) in recent history was their massively underfunded pension plans. Consider that at the end of 2012 Ford's global pension plan was underfunded by $18.7 billion -- that's more than its total automotive debt of $14.3 billion! GM put that figure to shame with a pension plan underfunded to the tune of $27 billion. In the past year, I've read numerous headlines regarding how America's two largest automakers have drastically improved their pension funds, but I'd argue that one of them has not made as much progress as you might think.

I think Ford has tackled the problem much more effectively than General Motors, and the latter's "improvement" seems to be overstated.

There are multiple ways a company's pension fund can improve its funded status. The simplest is to contribute more cash to your asset plan. Ford has dropped $8.4 billion into its pension plan over the last two years, far more than GM. Second, Ford was a step ahead of GM in another aspect: it began a sizable de-risking strategy in which it offered more than 90,000 U.S. salaried retirees and former employees an opportunity to take a cash lump-sum payment. That strategy essentially would wipe Ford's future risk off its books and lower its total obligation figure. Third, as previously mentioned, discount rates are rising which is lowering overall pension obligations.

Ford has taken full advantage of all three options and has reduced by about half its global plan's underfunded status, from $18.7 billion at the end of 2012 to roughly $9 billion at present. GM, however, has contributed much less cash to its global plan, relying instead on rising discount rates and de-risking strategies to lower its pension obligations. The result is as you would expect: its overall obligation amount has declined but with only a minimal improvement to the pension plan's funded status. 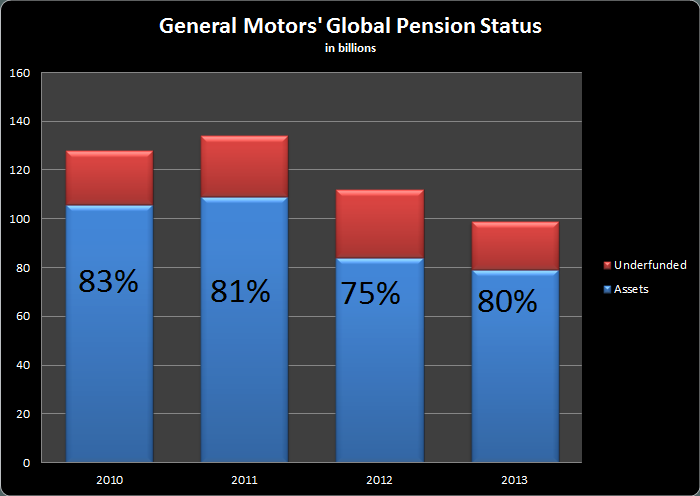 Near the end of 2013, Morgan Stanley's credit strategy team estimated that the 100 largest U.S. corporate pension plans on average were 90% funded. I believe Ford to be at or near that mark; this is backed up by the fact that the company plans to contribute only $1 billion to its asset plan in 2014, compared to $5 billion last year. We'll know for sure soon when Ford releases its overall obligation figures. GM hasn't made much progress since 2010 and remains at 80% funded – not the drastic improvement the media is making it out to be.

Foolish takeaway
General Motors has a lot of positive things going for it, despite a disappointing fourth-quarter-earnings result. I've bought into GM because I believe the company is taking the right steps to improve its business and pricing with a whole slate of new or redesigned vehicles over the next couple years. I also believe its margins will continue to trend upward to 10% in the U.S. by mid-decade with the overhaul of its vehicle lineup, including two of its most profitable products, the Silverado and Sierra trucks. In addition, GM plans to triple sales of its Cadillac brand in China which should help boost top and bottom lines in its second most profitable segment, GM International Operations.

GM's lack of "drastic" progress doesn't make it less of a valuable investment, although I would love to see its pension plan 90% funded sooner rather than later. The company's pension status is definitely one aspect investors will need to watch in the coming years.