Please ensure Javascript is enabled for purposes of website accessibility
Log In Help Join The Motley Fool
Free Article Join Over 1 Million Premium Members And Get More In-Depth Stock Guidance and Research
By Sara Murphy – Feb 9, 2014 at 11:46AM

Water scarcity is threatening global prosperity, and it will take $1 trillion per year to fix the problem.

California is in the midst of an unprecedented drought. Many West Virginians are afraid to drink their tap water. Syria is in the throes of a horrific conflict that has strong links to that country's water crisis. Parts of southern England are drowning under the wettest January ever recorded. According to analyst projections, all of this is going to get worse, and the world needs to double its spending on water infrastructure if we hope to do anything about it.

Rising water scarcity
Consensus is growing at society's highest levels that the world has a water problem that will soon reach menacing proportions. The World Economic Forum, or WEF, publishes an annual report that assesses the evolution of a comprehensive set of global risks, and the mechanisms by which they can become systemic. The WEF surveyed 700 leaders and decision-makers for its 2014 edition. Water crises ranked in third place, behind only fiscal crises in key economies and structurally high unemployment/underemployment.

This week, the journal Bioscience published the results of its survey of more than 600 environmental decision-makers and scientists in the U.S., analyzing their research priorities for natural resources management over the next decade. The number one research question was, "What quantity and quality of surface and groundwater will be necessary to sustain US human populations and ecosystem resilience during the next 100 years?" 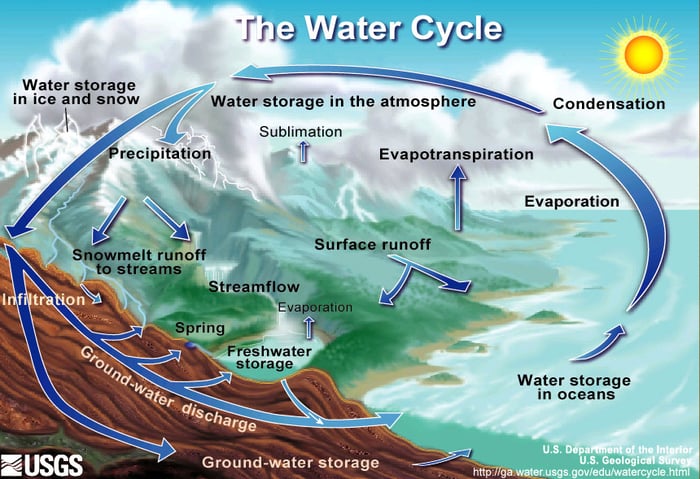 What's the damage?
Various factors have converged to put us in this position, chief among which are the following:

The WEF's Global Agenda Council on Water Security explains how these issues have already played out in dramatic and devastating fashion. In 2011, flooding in Thailand slowed down global automobile production and severely disrupted the computer hard-drive supply chain. The tsunami in Japan that same year compromised global industrial production. All of that is what happens when there's too much water.

The reverse is also devastating. Russia restricted agricultural exports in 2010 in response to drought, which sent staple-grain prices soaring across the Middle East and North Africa. The WEF observes, "The resulting food shortages and price rises aggravated the tensions that led to the Arab Spring."

So what's the remedy?
Experts believe that the global community needs to take several major steps to avert a serious water crisis, all of which will require engagement from all sectors of the economy.

1. Prioritize investment in large-scale water infrastructure.
Giulio Boccaletti, managing director for global water at The Nature Conservancy, points to a joint UNICEF-World Health Organization report finding that "more than 1.2 billion of those who gained access to water from 1990 to 2008 had it piped to their premises." Boccaletti explains that this effect is orders of magnitude more significant than the small-scale water projects that many perceive to be the key to water access.

2. Protect the natural infrastructure
The cheapest path to clean water access is to avoid fouling it in the first place. This means that we have to go beyond water utilities and treatment technologies to pollution sources. It means paying attention to agricultural runoff, chemical production, and hydraulic fracturing activities, among others, to preserve our dwindling ground-water sources.

3. Mobilize all capital sources
To answer this challenge, capital has to flow from all segments of the economy: government, philanthropy, and industry. Many companies are doing incredible work to provide their part of the solution.

Xylem (XYL -3.43%), for example, transports, treats, and tests water. Beyond its product offering, Xylem has a vision, and sees itself as a partner with municipalities in solving water problems. American Water Works (AWK -2.06%) and National Grid (NGG -1.26%) are working with the non-profit Center for Climate and Energy Solutions to work on the unique challenges that occur at the energy-water nexus.

But these companies can't do it alone. As voters, we need to prioritize government initiatives to protect and enhance our clean water sources. As investors, we need not only to direct our money toward companies that provide water solutions and infrastructure, but also to reconsider investments in companies that compromise our natural infrastructure. Considering the scale of global need, and the fact that water demand is unlikely to dry up for the foreseeable future, this promises to be a winning strategy.

Sara Murphy has no position in any stocks mentioned. The Motley Fool recommends National Grid plc (ADR). We Fools may not all hold the same opinions, but we all believe that considering a diverse range of insights makes us better investors. The Motley Fool has a disclosure policy.