Please ensure Javascript is enabled for purposes of website accessibility
Log In Help Join The Motley Fool
Free Article Join Over 1 Million Premium Members And Get More In-Depth Stock Guidance and Research
By Daniel B. Kline – Feb 10, 2014 at 11:35AM

Twitter may still be growing, but its efforts to add users in the United States have stalled.

While Twitter (TWTR) has been on a steady growth path worldwide, the social media site's gains in the United States stalled at the end of 2013.

Globally Twitter, which reported 2013 results Feb. 6, had a good year as its average monthly active users grew from 232 million to 241 as 2013 closed, an increase of 30% year-over-year. And while that number looks good on the surface, it's actually a little misleading since only 3.9% of those gains occurred in the fourth quarter.

In the United States, the numbers were far more troubling as user growth was essentially flat as well. Overall usage of the site actually fell in the fourth quarter, as reported by Bloomberg, with Twitter timelines receiving 148 billion views, down from 159 billion in the third quarter. 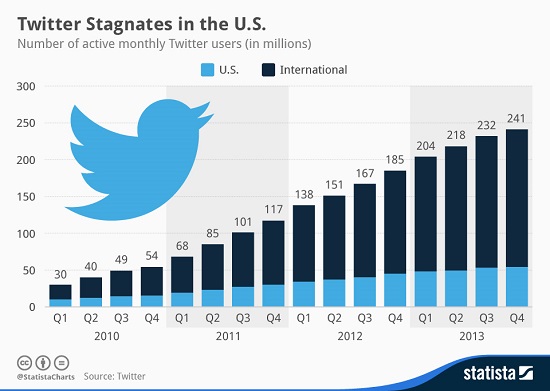 In an earnings call to discuss the first-ever earnings report from the company, which went public in November, CEO Dick Costolo said he is focused on reversing the trend.

"Up until last year, our growth has been viral and organic," he said. "Growth was something that happened to us." Now "it will be a combination of changes introduced over the course of the year that will start to change the slope of the growth curve."

That may not be so easy. While Twitter is popular, it may be more of a niche product than Facebook (META -0.74%) -- useful in some areas, but not as integrated into people's daily lives.

"Twitter needs to answer the question about whether it can ever become a mass-market product, or whether it's more destined to be a niche for news junkies," Robert Peck, an analyst at SunTrust Robinson Humphrey in New York, told Bloomberg.

In November 2009, Venturebeat reported that a number of tracking groups including Comscore, Compete, Google, and Quantcast agreed that Twitter's U.S. traffic had "reached a peak in July or August and has begun to decline slowly." According to Comscore, October 2009 traffic was down 8% from from September 2009, while Compete shows a more modest decline of 2.1%.

Those numbers, as you can see from the chart above, rebounded and the company began growing again in the U.S., but not nearly as much as it has globally where the company had 30 million active monthly users when it began 2010 and 241 million at the end of 2013.

While Twitter may have plateaued in the U.S., it did reveal even more international expansion in its earnings report. The company said it "made its platform more accessible to a broader range of advertisers by launching its self-serve advertising platform to small and medium-sized businesses in the UK, Ireland, and Canada." That's somewhat positive, but even if the company stays on an upswing globally, that may not be as valuable as U.S. growth.

In its earnings release, Twitter showed a rise in ad revenue per timeline (what Twitter calls its feed) from $0.36 per thousand views to $0.60. That's good, but it's much lower than the comparable number in the United States where revenues per thousand views increased from $2.10 to $2.89 in the fourth quarter.

A blip or a stumble

While Twitter's 241 million active monthly users is an impressive audience, it's less than a quarter of the 1.228 billion monthly active users Facebook ended 2013 with. One one hand, that shows huge room for growth for Twitter, but Facebook may be a broader product than Twitter with a much higher ceiling for total users.

Brian Blau, an analyst at Gartner, told Bloomberg Businessweek that he was troubled by the slowing user growth.

"They've got some user engagement issues," said Blau. "What I don't see here is any kind of formula that says they've got the killer gigantic big kinds of products and revenues that you see from companies like Facebook and Google. They're trying to fix it, but they're not there yet."

Daniel Kline has no position in any stocks mentioned. The Motley Fool recommends Facebook and Twitter. The Motley Fool owns shares of Facebook. We Fools may not all hold the same opinions, but we all believe that considering a diverse range of insights makes us better investors. The Motley Fool has a disclosure policy.

Should Twitter Be Held Accountable for Penny Stock Scams?

Is it Time to Pull the Plug on the Broadcast TV Business?
356%