Chris Brantley
(chrisb21)
Author Bio
Chris Brantley is a contributor at The Motley Fool specializing in sports-related businesses, the food and beverage industry, and whatever else piques his curiosity in the world of business and beyond.

KPCB's Mary Meeker recently released her annual Internet Trends Report. It's a fascinating read for any investor that wants to get a big-picture view of the Internet landscape, domestically and internationally. One of the eye-openers concerned Internet advertising (desktop and mobile), which climbed 16% from 2012 to 2013. Internet advertising generated $116 billion in 2013, up from $100 billion in 2012. Spending has nearly doubled since 2008 when it brought in $62 billion. 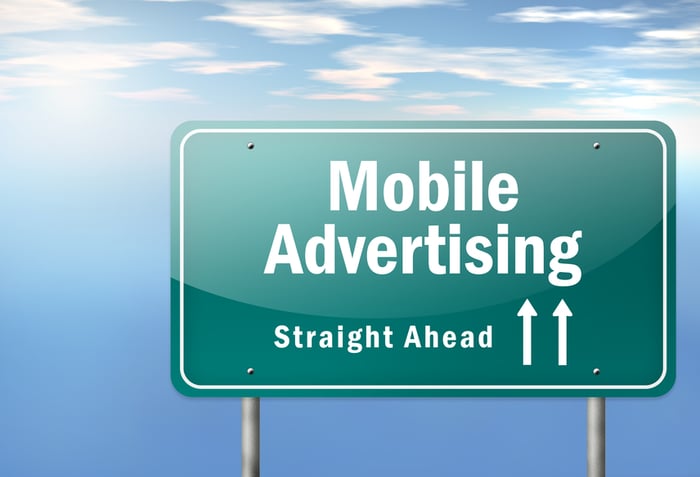 Mobile ad revenues jumped nearly 50% from 2012 to 2013, but only accounted for 11% of Internet advertising. Desktop advertising made up the remaining 89%. Mobile advertising is growing like crazy, but still has a lot of upside. Smartphone (1.6 billion) use has already surpassed desktop and laptop use (789 million and 743 million, respectively). As this trend continues mobile ad revenues will capture a much larger piece of Internet ad revenues. Facebook (NASDAQ:FB), Google (NASDAQ:GOOG), and Twitter (NYSE:TWTR) -- and their investors -- stand to reap a large percentage of this growth.

Making more per user
Currently, Google is way ahead of Facebook and Twitter in average revenue per user (ARPU),  a key metric for gauging how effectively a company is monetizing its social network. ARPU is the annualized revenue per monthly active user (MAU). In 2013, Google led the pack with an ARPU of $45 (six times the ARPU of Facebook), but only saw 8%year-over-year growth. Facebook had an ARPU of $7.24, but its ARPU increased 57% year-over-year. Twitter stood at $3.55 (half of the Facebook ARPU), but increased at a clip of 80% year-over-year.

The bottom line is Facebook's and Twitter's ARPU has a lot of room to grow, while Google's ARPU seems to be maturing and leveling off.

Mobile percentage of MAUs
Another key metric is MAUs. Google does not break out mobile and desktop users, but Facebook and Twitter do. Currently, both are around 80%. Facebook has 79% of its MAUs accessing its site through mobile, while Twitter has 78%.

Redirecting ad dollars
Print advertising accounts for the highest gap between low time consumption and high ad spending. Consumers only spend about 5% of time consuming print media, but advertisers spend a disproportionate 19% of ad dollars in the category. This is likely to change dramatically over the next few years and most of the dollars should shift to Internet and mobile advertising.

According to the Internet Report, this represents a $30-billion opportunity for companies. Google, Facebook, and Twitter, which generate revenue through Internet and mobile advertising, should receive a substantial increase in ad revenues as a result. The $30 billion is based on how much ad revenue would be reallocated if advertisers matched the percentage of their ad spend to the percentage of consumers' time consumption. For example, if consumers spend 25% of their time consuming mobile, advertisers would invest 25% of their ad dollars in that category.

A Fool's takeaway
Even if ad spending doesn't match exactly, it's hard to imagine a scenario where the gap in mobile ad spend and mobile time consumption doesn't shrink significantly. This means much more revenue for the companies that leverage the opportunity. Google and recently Facebook have proven that they know what they are doing in this arena. However, Twitter is still figuring it out. So if you want stable growth go Google, but if you're willing to take on more risk for a greater gain, Facebook has more room to increase its ARPU and thereby its value. As for Twitter, a wait-and-see attitude is the best course of action at this point.