Has Zynga lost the ability to monetize its games? The answer might surprise you.

Social gaming company Zynga (ZNGA) carries around one big question: Can the company monetize its games? Zynga's average bookings per daily user, which serves as a measure of overall monetization, has risen mostly due to a downslope in players. But how much money does Zynga make off its players, and how much does a player drop matter?

Zynga has two metrics that provide a ballpark percentage of players who make in-game purchases. Why does that number matter? Zynga makes very little money from advertising and only a few titles cost anything to play upfront. The company falls between private social gaming companies with blockbuster hits and public game companies such as Electronic Arts (EA 0.50%), which hasn't had a lot of luck in social gaming but has other segments for support. So Zynga's monetization problems tend to make headlines more than its competitors.

But the percentage of paying players holds a surprise, and it could help Zynga better monetize in the future.

How many pay to play?
The estimate comes from two key metrics that Zynga breaks out in every earnings release: MUUs and MUPs.

Monthly unique users, or MUUs, is the number of unique individuals who play a Zynga game on a particular platform within a designated 30-day period. A person who plays more than one game on that platform is only counted once, but an individual can sometimes count as more than one if using multiple platforms. Zynga then averages the MUUs for each month in the quarter for the final reported number.

Monthly unique players, or MUPs, includes the number of unique players who made a payment during the month through a supported platform, such as Facebook or a mobile app store. Again, single players can sometimes count double if two different platforms were used during the month and the months are averaged for the earnings report number.

Both MUU and MUP have declined in recent quarters alongside the center stage metrics daily active users and monthly active users. 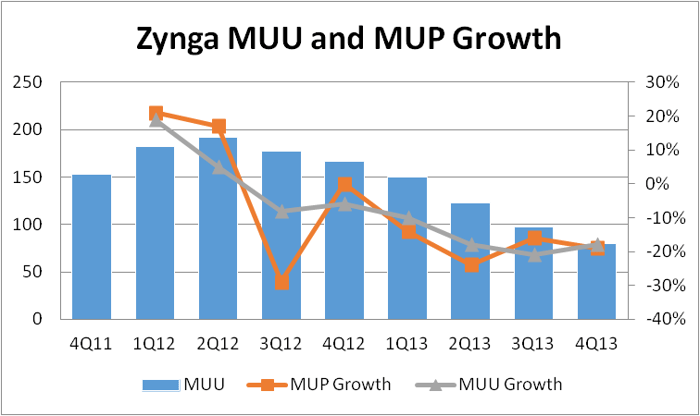 But what happens when calculating MUP as a percentage of MUU?

Why does that matter?
Zynga makes most of its money through in-game purchases and it's well-known that only a small percentage of players conduct those purchases. But the steadiness of the percentage has interesting connotations-especially when combined with the fact that three games accounted for over 60% of online revenue in the fourth quarter.

Game popularity from a monthly unique users standpoint doesn't mean much for Zynga unless that particular title is also helping at least hold that purchase percentage at 2%. Right now, the games Farmville 2, Zynga Poker, and Farmville likely fit into that category. Those titles were responsible for 26%, 21%, and 15% of online revenue in the quarter, respectively. The latter two games are at least five years old.

So Zynga needs to measure the strength of each game based on a combination of popularity, monetization, and the ability to continue that monetization over a longer period of time. Games that meet these qualifications can help boost revenues even if the player numbers don't hit the heights of King's Candy Crush Saga.

And the company needs to continue shuttering games that aren't working. The past year has included the closures of Zynga Slingo, Empires and Allies, and The Ville, to name a few. Slingo had 3.5 million monthly active users at the time of its closure but was too expensive from a licensing standpoint and the game's monetization didn't pay off. The Ville earned a lawsuit from Electronic Arts claiming it was a clone of The Sims Social, but neither the original or Zynga's version found enough of an audience online and both shut down.  The difference between the closures is that EA at least has a console empire to fall back on-and Zynga will never have that much wiggle room.

Foolish final thoughts
Can Zynga monetize? Yes, but it's not an easy or predictable process because monetization comes down to having a game with long-term popularity and in-game incentives that appeal to a wider base of users. But Zynga's recent acquisition of mobile developer NaturalMotion shows the company could still have the ability to surprise the world with new, innovative games.

Why Taboola Stock Skyrocketed This Week
376%