Is Netflix spending too much on streaming content licenses? Check these charts out and decide for yourself.

Is this where streaming subscription fees go to be spent on frivolous content deals? Image source: Netflix.

There's no question that Netflix (NFLX -0.07%) pours a lot of money into streaming content licenses. But is that really a problem?

Many critics would argue that Netflix is investing way too fast in content licenses. Fellow Fool Adam Levine-Weinberg, for example, worries that the company's profits will be hamstrung for years to come for the simple reason that content costs are rising much, too fast.

I respectfully disagree. Here's why, as told in a few spiffy charts.

The basics
Before diving into the numbers, let's look at how Netflix records the cost of building a digital content library.

In the old DVD-based model, things were so much simpler. When dealing with physical artifacts such as VHS tapes, DVD discs, or even Blu-rays, you can simply buy tapes and discs in bulk and then rent them out any way you can think of. This right is protected by the so-called first sale doctrine.

But digital video streams are a very different animal. Netflix can't just buy one retail-priced copy of The Avengers and then start streaming it to millions of customers. You could argue that each video stream is another copy of the original film -- and copying is very much not protected by that important doctrine.

Instead, Netflix has to sit down with Disney and hammer out a licensing deal for The Avengers. Sometimes, these deals focus on a single piece of content. More often, and specifically in Disney's case, there's a long-term deal in effect that gives Netflix the advance right to stream movies well before they've been filmed.

In some cases, Netflix has the right to stream films that don't even have a name yet, or a director attached. The Disney deal is a multiyear arrangement in which exclusive access to Disney's silver screen content starts in 2016. You can bet that some of the films Netflix will get in, say, 2019 aren't even in the planning stages yet.

The cost of each movie is not tied to the number of Netflix views it gets. Sometimes, the price tag is a flat fee per title that both sides know right away; other deals are tied to market metrics such as box office performance.

Breaking it down
All this complexity forces Netflix to break its content costs down into several buckets. When the cost of a specific title can be accurately estimated, it's recorded as a liability of the current (for payments due within the next year) or noncurrent (everything farther out than 12 months) kind. If there's too much guesswork involved to read a reasonable estimate, you're looking at an off-balance-sheet obligation.

Slicing the library a different way, Netflix also reports its streaming liabilities in terms of how far out the estimated payments are due. Here, there's no difference between balance sheet liabilities and unreportable estimates. 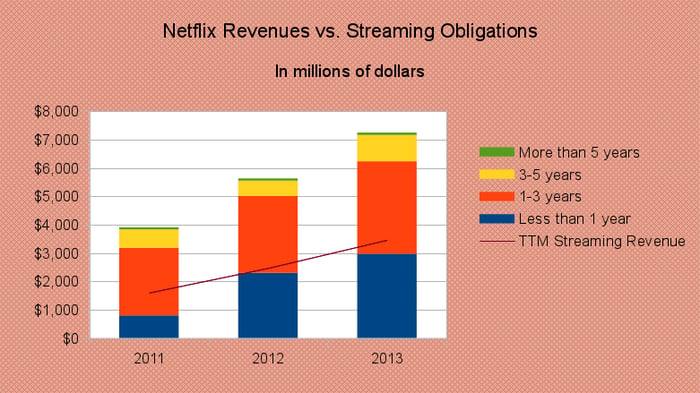 These charts are all based on data from six years of Netflix 10-K reports..

The size of the entire content slate has grown 86% over the last two years, while streaming revenue jumped 116% higher. The fresh slate is growing much faster than the longer-term projections.

Keep in mind that these figures include both the maturing American market and the younger international segment. A big portion of the 2012 increase in short-term content costs comes from covering Latin America and the Caribbean in one fell swoop.

OK. So what about those dreaded liabilities not recorded on the balance sheet? This is, after all, what many critics argue will kill Netflix in the end. And I have to admit, this next chart looks scary at first glance: 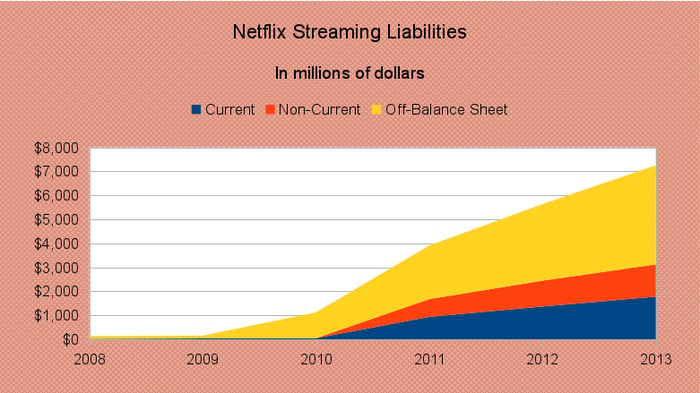 Judging by the alpine slopes of the last couple of years, it certainly appears as if Netflix's unknowable long-term content costs are taking on a life of their own. It's liability growth of an Olympic caliber.

Or is it? Doing the math on how much of each year's liabilities fall into each accounting bucket, it turns out that Netflix actually has a consistent strategy going on here: 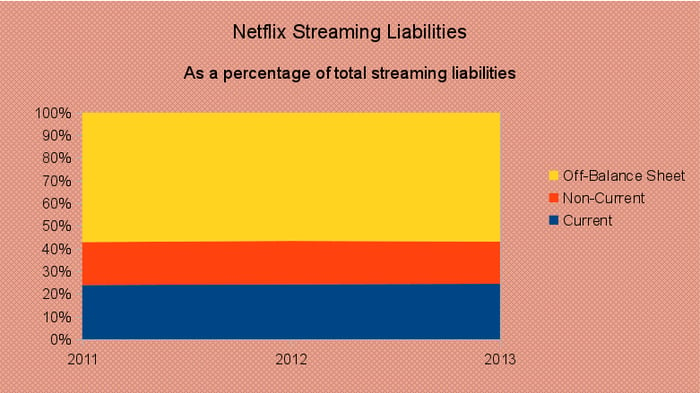 That's right. In each of the last three years, Netflix has classified 24% of its total content obligations as current liabilities and 19% as noncurrent, with 57% staying off the balance sheet.

The Foolish takeaway
Call me crazy, but I don't see any evidence of runaway spending here. In my eyes, this looks like a reasonable balance of locking down long-term license deals and executing the agreements coming due.

We're looking at a wholesale strategy shift here that was several years in the making. The declining DVD business masks just how fast Netflix is growing its global streaming operations. Total company revenue has increased 37% over the last two years, but streaming sales jumped 86% -- and much faster than that in the international segment.

Investing in the content that keeps this hypergrowth going seems like a completely sensible strategy. To everything (turn, turn, turn), there is a season. Right now, Netflix is putting its back into rapid growth, and the time for profiting on a mature streaming business will come later.