Please ensure Javascript is enabled for purposes of website accessibility
Log In Help Join The Motley Fool
Free Article Join Over 1 Million Premium Members And Get More In-Depth Stock Guidance and Research
By Dan Newman - Feb 10, 2014 at 10:15AM

A few weeks ago, a report claimed that based on viral growth models Facebook (META 5.82%) could lose 80% of its users by 2017. This was quickly debunked by Facebook itself. Now, a new report and scientific model shows that Facebook will likely sustain its membership base into the future, along with several other websites.

So, will Facebook end up like MySpace or not? What about other websites? What do they need to watch for to avoid such a fate?

Sustainable versus unsustainable users
The newest report identifies websites as either self-sustaining or unsustainable based on daily active user patterns, and identifies differences in growth of word-of-mouth versus media and marketing campaigns. Unsustainable websites include Rue La La, which holds flash fashion sales, Flixster, a social movie site, and Formspring, a social question and answer site. These unsustainable sites all ride a similar curve, exhibited here by Tea Party Nation's data: 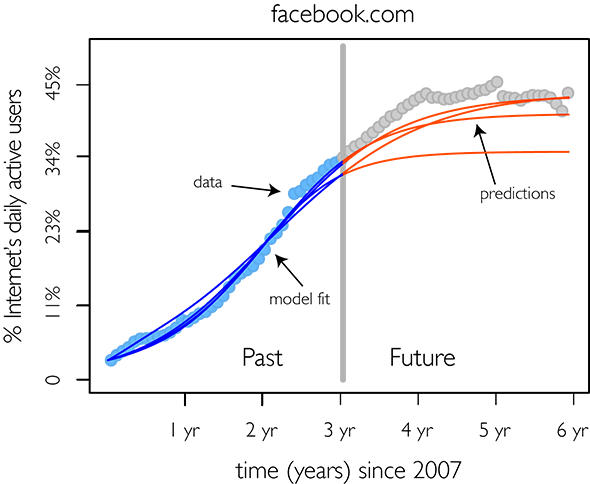 The most fascinating thing in this study is that even given external shocks, like a presidential election, a bump in marketing, or even competitive upstarts, the models end up reverting to their predicted destinations in the long-term, whether that's at a sustainable level of users or zero. And this is why Facebook is different than MySpace.

MySpace's myth
MySpace is often brought up as the potential future of Facebook: a social network devoid of users or much value. And Facebook is often brought up as what caused MySpace's demise. And therefore, Facebook needs to always be vigilant to potential disrupters, like Instagram. However, according to this report, Facebook had little to do MySpace's early decline. As said before, in the long-term, a social network will follow its modeled path even in the presence of short-term jolts like new competitors.

MySpace member growth started to slow in 2007, and according to this report, "Facebook's competition seems to have only significantly affected MySpace by late 2008." MySpace tripped over itself. As Napster co-founder Sean Parker said, "They weren't successful in iterating and evolving the product enough, it was basically this junk heap of bad design that persisted for many, many years."

For investors
This means that as much as companies like LinkedIn, Netflix, and Facebook have to look around at potential competition, they really have to watch out for a lackadaisical development attitude. Additionally, these companies might much more control over user growth than any external factor.

This also means that when user growth stalls, it can come quickly and without warning, like Myspace's fall -- and the first data point would probably be from a disastrous quarterly report.

Finally, we're in a new age of social media and tech companies that are reaching saturation and a steady state of users. The mature companies can't rely on user growth for elevated price-earning ratios, and must employ new strategies to boost potential earnings and maintain optimism in the market.

For LinkedIn, its acquisition of data analyzer Bright points to its future monetization strategy beyond additional users. Through helping companies pinpoint better matches for available jobs, it can keep gobbling up swaths of cash corporations spend on recruiting. In its latest earnings report, talent solutions remained LinkedIn's largest segment by revenue, and grew at the fastest rate compared to its other business segments.

Handling the market's expectations, morphing into mature business models, and keeping up with user demands are the keys for tech companies to become successful investments.

Why SWVL Holdings Stock Was Down on an Up Day