Concho Resources had a great year.

Permian Basin-focused oil and gas company Concho Resources (CXO) had a great 2013. The company delivered fantastic gains on all of the metrics that matter. Let's take a closer look at Concho's latest operational results and what these mean for investors in 2014 and beyond.

Production is growing fast
Concho Resources grew full-year production to 33.6 million barrels of oil equivalent, or BOE -- a 20% increase from 2012. That is tremendous production growth for the company, though it's only really getting started. The company plans to double production by 2016; it is accelerating its growth rate to 25% per year, as the following chart shows. 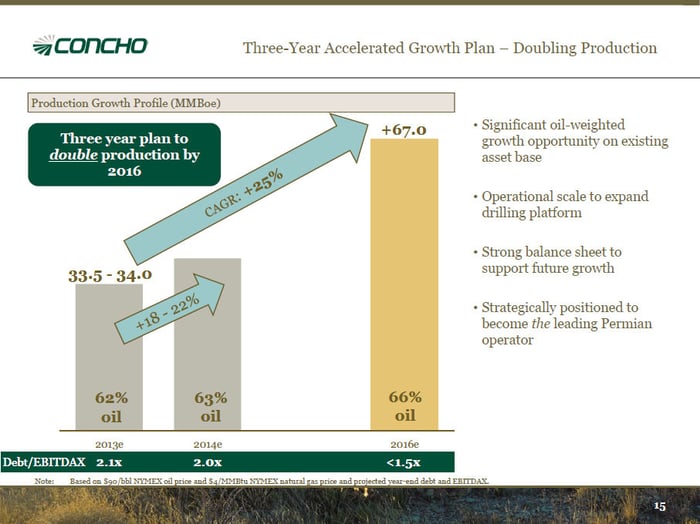 Reserve growth hasn't caught up ... yet
In addition to production growth, Concho Resources is also delivering solid reserve growth. The company grew its proved reserves by 13% last year to a total of 503 million BOE. Overall, Concho added 89.4 million BOE of new proved reserves, which means it replaced all of its production and then some as its reserve replacement ratio was 266%.

Concho Resources pointed out that the company and its peers are early in horizontally drilling the Delaware Basin portion of the Permian Basin. That lack of history is currently constraining the magnitude of proved reserve additions. Put another way, the company believes it has more reserves there than it is presently allowed to book as proved.

That's not an issue limited to Concho Resources. Pioneer Natural Resources (PXD -1.84%), for example, had proved reserves totaling 1.1 billion BOE at the end of 2012. Of that, just 627 million BOE were in the Permian Basin's Spraberry formation. However, Pioneer Natural Resources sees another 7 billion BOE of potential net recoverable resources in the Permian Basin that could become proved reserves over the next few years.

In that time span we could see Permian Basin-focused oil and gas specialists adding tremendous reserves as these companies prove up new portions of that legacy oil play. Clayton Williams Energy (NYSE: CWEI), for example, recently replaced 546% of its oil and gas production through new reserve additions. Given the company's recent well results in the Delaware Basin, Clayton Williams' proved reserves could grow even more over the next year.

These numbers all bode well Laredo Petroleum (LPI -1.71%) and other drillers in the Permian. Laredo is focused on the Midland Basin portion of the play, the company sees its resource potential being 10 times its proven reserves. That puts Laredo Petroleum's reserve upside similar to that of Pioneer Natural Resources.

Investor takeaway
The Permian Basin is one of America's oldest oil plays, but its best days could lie ahead. Companies focusing on the play are delivering fantastic production growth. Even better, future growth is currently masked by the fact that the companies cited in this article are still early in the play, which is holding back growth in proved reserves. That adds some hidden upside to each company focusing on the Permian Basin.