Please ensure Javascript is enabled for purposes of website accessibility
Log In Help Join The Motley Fool
Free Article Join Over 1 Million Premium Members And Get More In-Depth Stock Guidance and Research
By Patrick Morris - Feb 10, 2014 at 10:29AM

U.S. Bancorp is significantly more expensive than peers Citigroup, Wells Fargo, Bank of America, and PNC, but it still may be worth a consideration.

There is one bank that is trading at a rate three times more expensive than some of its peers, but it turns out that may be for good reason.

Finding value
Banks are a tricky thing to value at first glance, as the standard price-to-earnings (P/E), price-to-sales (P/S), or the other endless valuation metrics don't always apply. Consider for a moment Bank of America (BAC -1.38%) which at first glance has a P/E ratio that is nearly double that of fellow megabanks Citigroup (C -0.37%) and Wells Fargo (WFC -1.30%), and is well ahead of regional competitors US Bancorp (USB -0.93%) and PNC (PNC -0.60%):

Any investor considering an investment in a bank would likely immediately cross Bank of America off their list if they only looked at the relative P/E ratio, as no one would want to consider an investment in a company that is believed to be riskier and more expensive than its peers.

However, the P/E ratio isn't a great proxy for banks, as often their earnings can be hit by accounting adjustments, legal settlements or all sorts of other things. Instead it is better to look at their price-to-tangible book value, which essentially quantifies the difference between what the market says a company is worth versus what it would actually be worth if it were liquidated entirely and only the accumulated equity on the balance sheet remained. When looking at that same list, we see something rather interesting:

There is almost a complete reversal of the ordering of value, and instead of US Bancorp and Citigroup having an apparently similar valuation, it turns out that US Bancorp is almost three and a half times more expensive on a relative basis. Bank of America also moves from being the most expensive by a wide margin to in fact being one of the least expensive.

The outlier
Understanding it is 50% more expensive than the other perceived safe bank, Wells Fargo, it is natural to ask both: why is US Bancorp so expensive, and is it worth an investment consideration?

The first answer is simple, and the reason US Bancorp is so expensive is simply the result of its continued ability to generate astounding returns. Since 2010, it has been able to grow its tangible book value at an unparalleled rate relative to its peers: 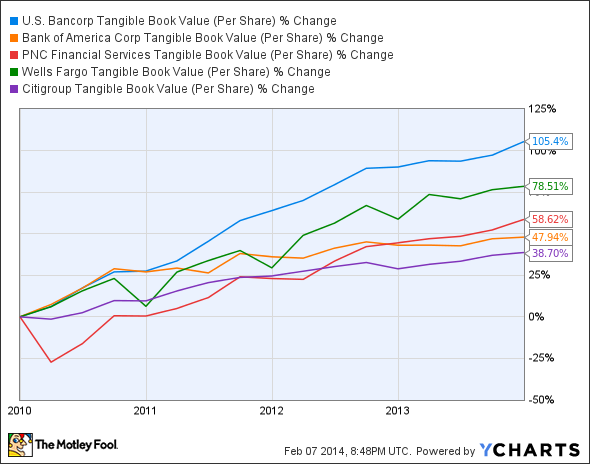 Of course the reason behind this incredible growth is US Bancorp's resounding ability to deliver superior returns. For example, consider its full-year 2013 profitability relative to the four peers mentioned previously:

While it is undoubtedly expensive on a relative basis, there is little denying the higher premium demanded is justified. However the next question, as to whether or not it is worthy of an investment consideration, is a bit more nuanced.

The investment
As with any investment decision, the answer as to whether or not US Bancorp would be a good one depends on a variety of different factors. But when it comes to this expensive bank, there are two great Warren Buffett quotes that bear repeating:

With that in mind there are likely companies -- and perhaps even the four other ones mentioned earlier -- that could all deliver better returns to their shareholders than US Bancorp moving forward.

But when you consider that US Bancorp is almost unmatched in its ability to deliver returns and then distribute them back to shareholders (it returned 71% of its income back to shareholders in the form of buybacks and dividends in 2013), it is no wonder in 2009 Buffett also said, "I would love to buy all of US Bank or Wells Fargo."