Volkswagen blew past GM in China last year. Here's how GM is moving to recover. 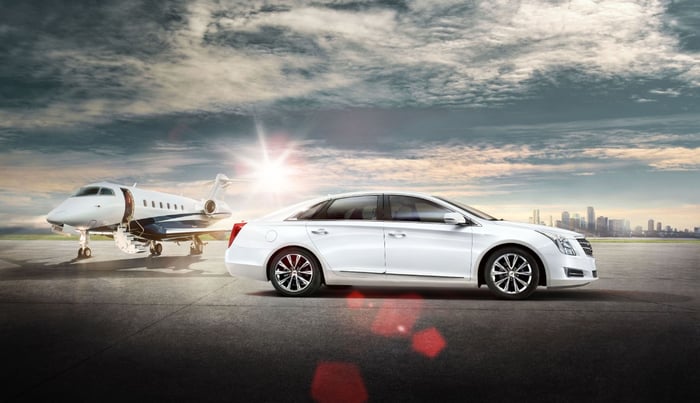 General Motors (GM 0.87%) said on Tuesday that its sales in China were up 12% in January, setting an all-time monthly record for GM in the world's largest auto market.

That's good news for GM, which has struggled a bit in China recently. But it's clear that GM still has work to do in this still-booming market.

A solid month for GM's major brands
GM said that sales by the Shanghai GM joint venture, which sells vehicles under the familiar Buick, Chevy, and Cadillac nameplates, were up 11.4% over year-ago results.

Buick sales rose 15.7% on the strength of the Excelle XT and GT, a sedan and hatchback that are closely related to the Buick Verano sold here in the U.S. Sales of Chevy's compact Cruze and tiny China-only Sail remained strong, while Cadillac posted strong year-over-year gains as the big XTS sedan was counted in January results for the first time.

Month after month, the Buick Excelle XT and its sedan sibling, the Excelle GT, are among GM's biggest sellers in China. The two are closely related to the Buick Verano sold here. Photo credit: General Motors.

GM's Wuling joint venture, which makes a line of popular, inexpensive commercial vans, posted a 13.9% year-over-year increase in sales, while the FAW-GM truck joint venture posted a 26% drop for the month. (GM didn't give an explanation for the decline in truck sales.)

On balance, it was a good month for GM. But when we look deeper, we can see that its vaunted operation in China is starting to show some holes.

Some big holes have appeared in GM's China strategy
There's no doubt that China has been one of GM's biggest success stories over the last decade. But GM has lost some ground in the Middle Kingdom in recent months.

GM seemed to miss out on two big trends that have emerged in China's massive auto market over the last few years: The turn toward SUVs, and the boom in luxury vehicles of all kinds.

That gave archrival Volkswagen (VWAGY 1.39%) an opening to blow past GM in total sales in China last year. VW's compact Tiguan crossover has done well in China, but its Audi brand was perfectly positioned to jump on both trends -- and Audi now has a commanding lead in China's booming market for luxury vehicles, a lead that has given VW's bottom line a substantial boost.

GM is moving to recover, but it will take a while
GM, meanwhile, is scrambling to catch up. It's almost ironic that General Motors of all companies didn't have a strong SUV lineup to offer to Chinese customers, but the reality is that GM got caught somewhat by surprise as China's market turned more toward crossovers and sport utilities.

Meanwhile, GM's long-neglected luxury brand Cadillac has had just a tiny presence in China. But there, GM is making big investments to try to catch up. GM is targeting a 10% share of China's luxury market for Cadillac by 2020, and is investing big in new models and a dedicated factory in Shanghai to make that happen. GM hasn't made any formal announcements, but I expect that factory to begin producing the CTS and ATS by this time next year.

The softened lines of the new Cadillac ATS Coupe should play well with Chinese luxury-car buyers. The new coupe is likely to arrive in China late this year or early in 2015. Photo credit: General Motors.

Meanwhile, the General is moving to bring more of its crossovers and SUVs to China. The compact Buick Encore went into production in Shanghai in 2012, and it has been a steady seller. But this is a project that will likely require a few new models, including an all-new Cadillac SRX crossover and perhaps a compact luxury crossover as well.

The upshot: No longer the leader, GM is belatedly making the right moves
GM was China's market share leader for eight straight years, until VW stole the crown in 2013. Recovering the lead may not be simple: VW has tremendous momentum with its mass-market models as well as the leading luxury brand in China, while the gaps in GM's lineup will take time to fill.

Meanwhile, other contenders are on the move. Ford (F 0.36%) last year blew past Toyota and Honda in market share, and could report another big gain when its January sales numbers are released later this week. And just like GM with Cadillac, Nissan (NSANY 0.14%) is making big investments to make its Infiniti brand a luxury contender in China -- and it's not the only one.

GM, though, is working from a solid position. Even if it doesn't recover its lead over Volkswagen, it should continue to see steady gains as China's auto boom continues to unfold over the next several years.